If you’re anywhere near the British Library, do take some time to step just to the west where you’ll see one of the most remarkable council estates of the interwar period.

The English disdain for multi-storey living is well-documented and frequently lamented, not least by those for whom ‘modern’ ideas of planning and functionalism have held sway. So the Ossulston Estate constructed between 1927 and 1931 generated much excitement and is seen, even in retrospect, as a rare – though modest – British exemplar of the daring architectural ideas pioneered in the Karl Marx-Hof of Red Vienna. The truth is a little more complex but the concept and execution remain impressive. 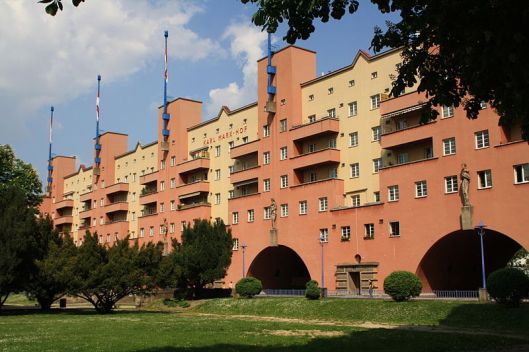 In the massive wave of building that took place after World War One when ‘homes for heroes’ were demanded and social housing was seen as the only viable means of providing sufficient, most larger-scale development took place along ‘garden suburb’ lines. The view – widely shared and strongly held within the labour movement itself – was that workers’ families needed houses and gardens.

An estimable principle and one that was powerfully resurrected after the perceived failure of much of the high-rise housing of the 1960s. But a problematic one also. Such low density housing was not cost-effective and was generally expensive to rent. It worked well for the better-off working class in stable employment but did little to tackle the mass of slum housing which remained and less to address the needs – and means – of its inhabitants. The London County Council, under the leadership of the Municipal Reform (Conservative) Party from 1907 to 1934, in particular, was criticised by many for its dilatory approach to this vital issue.

This was one context for the Ossulston Estate. Another was the peculiarities of its site – 8.8 acres but awkwardly set out in a long ribbon of land, 450 yards long by 84 wide. The LCC’s chief architect, George Topham Forrest, concluded ‘the only way, in the circumstances, the full utilisation of the land can be obtained is by building higher than the normal five storeys.’

A contemporary view of the Estate which illustrates the difficult site. (The British Library can be seen at the top of the photo.)

But such higher rise accommodation also entailed additional expenditures (on lifts, for example – only one LCC development had needed a lift to date: a block in the Tabard Street Estate). Such expenditures might be offset by higher rentals but these, of necessity, could come only from privately rented shops, offices or flats.

Topham proposed just such a mixed-use, public-private development. It was a highly unusual concept at the time but one that also appealed to the politics of the Municipal Reformers.

And that, in typically pragmatic and idiosyncratic fashion was the genesis of what might have been ‘the first comprehensive redevelopment sponsored by a local authority, as well as the first high-rise council flats’ in Britain (1). The Ossulston Estate owed less to vision than practicality and, in the event, even the modest vision of its conception was compromised. But this isn’t a sneer; if anything it’s a celebration of pragmatism at a time when ideology was about to wreak the most terrible havoc in mainland Europe.

Topham’s original 1925 design envisaged ground floor shops, first floor offices, then two floors with ‘flats of a character superior to the ordinary working-class dwellings’ with five floors of working-class accommodation above. There were no fancy ideas of social mixing here. Topham continued:

It is an essential of this idea that the superior flats should be segregated from the shops and working-class flats. Each class of property should have its own entrance and the entrances should be as remote from one another as possible.

Central heating was also to be provided. (Another practical solution to a real-world problem – the difficulties of hauling up and storing coal and disposing of ash.)

Topham altered these plans in his 1927 scheme which did reflect his study of the Viennese examples. His crucial modification was to create a broken roofline by constructing blocks of three to six storeys with two nine-storey towers interposed – ‘the best way of giving the new accommodation the greatest possible supply of light and air’. A rooftop play area calculated on some formula to provide space for 1880 children was also part of the overall plan which would accommodate some 3054 persons in 492 flats at a cost of £400,000.

Neville Chamberlain who, had history been kinder, might be remembered as a

reforming Minister of Health and Housing, laid the foundation stone of the first block (named then and now Chamberlain House) on 1 February 1928.

Cecil Levita, the chairman of the LCC’s Housing Committee who also gave his name to one of the blocks, spoke of ‘a noteworthy scheme which would mark a new departure in the construction of buildings’.

In the event, the law (government subsidies were not available to mixed-use schemes) and economics (private rental incomes were judged insufficient to cross-subsidise working-class accommodation) combined to torpedo the larger ideas. Private accommodation was omitted and six-story blocks of exclusively working-class flats constructed.

The Somers Town Pub: the Estate was quite unusual for the time in incorporating public houses 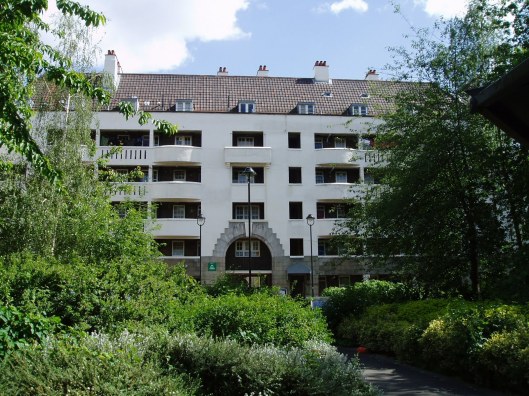 Nevertheless, the treatment – steel-frame construction, unadorned rough-cast walls, reinforced concrete balconies and an overall aesthetic – remained modernist and exciting to an emergent generation of planners impatient with the conservatism of British design and aspiration (2).

Architecturally it is pleasing. The blocks stand in the form of a huge military cross, with big squares happy in the possession of trees. Windows look out on to the central courtyards and the outer sides are lined with balconies of reinforced concrete, approximating in design to the models in Vienna which have been so greatly admired.

It was a far cry from the ‘Municipal Neo-Georgian’ then typical of most local government architecture.

The courtyard to Walker House, completed in more traditional brick in 1937

The Estate is now Grade II listed but it’s enjoyed a chequered history. Long years of neglect led to tenants’ protests against ‘inhuman living conditions’ in 1982. Camden Borough Council – which inherited the complex from the GLC in the 1980s – acknowledged serious disrepair in 2004 and a £6m scheme followed which created 44 new homes ‘from 66 cramped damp and outmoded flats in the original building’.

The Camden press release, headlined ‘Making a “slum” into family homes again’, offers a stark reminder of changing fashions, heightening expectations and the depredations of time but it’s a mark too of the continuing struggle to provide affordable, good quality homes to the less well-off.

(2) The quote is from Hugh Quigley and Ismay Goldie, Housing and Slum Clearance in London (1934).

The major source for this piece is Simon Pepper, ‘Ossulston Street: Early LCC Experiments in High-Rise Housing, 1925-1929’ from the London Journal, vol 7, no 1 1981. Pepper also provides a commentary to the Twentieth Century Society page on the Estate.  Some photographs have been taken with permission from Andrew Amesbury’s thoughtful and interesting blog entry on the Estate. Listed building information on Chamberlain House and Levita House is available online.