For those of you who have been following my blog, this might come as a bit of a shock: no working-class politics here and, on the face of it, a ‘municipal dream’ almost extravagant in its disregard for the lives of the poorest. But I think this municipal showpiece deserves some love.

‘Municipal reformers look to Birmingham as the eyes of the faithful are turned to Mecca.’(1)  By the late 19th century, Birmingham City Council had a reputation for radicalism unequalled in the country. This reputation owed not a little to the showmanship of the city’s leading politician, Joseph Chamberlain, and the extraordinary rhetoric employed by Chamberlain and other civic leaders. But the belief in municipal enterprise and pride in municipal endeavour were real as were its achievements.

We could write about the city’s early municipalisation of gas and water or its later record of council house building and healthcare. And we will but this entry will celebrate – unfashionably – the town hall or, as it’s known in Birmingham because an earlier building had taken that name, the Council House. 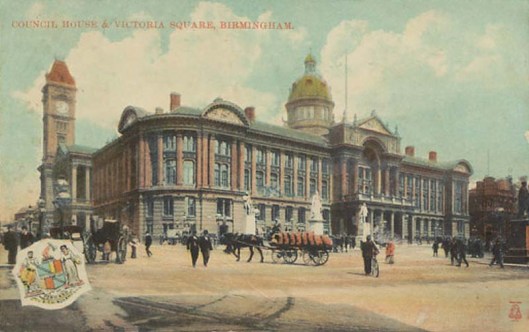 A postcard from the early 1900s

The Council House is designed to impress and does so, though perhaps more through scale and a sort of heavy grandiosity than any great architectural merit. The building emerged from a design competition and the winner, Yeoville Thomason, through a murky process which favoured the local man. The waters were muddied further by the request that Thomason’s final plans include design elements from another entry. This might explain the rather conflicted appearance of the facade – Renaissance palace and heavy classical portico. But the building’s interest lies more in the ideas that inspired it.

Construction began in 1874 with Chamberlain himself laying the foundation stone.

He graced the event with sentiments that, though he articulated them with peculiar force and eloquence, were typical of the era:

I have an abiding faith in municipal institutions, an abiding sense of the value and importance of local self-government, and I desire therefore to surround them by everything which can mark their importance, which can show the place they occupy in public estimation and respect and which can point to their great value to the community. Our corporations represent the authority of the people. Through them you obtain the full and direct expression of the popular will, and consequently any disrespect to us, anything which would depreciate us in the public estimation, necessarily degrades the principles which we represent…

It’s a lengthy quote but it repays attention. It eulogises representative government, lauds local sovereignty and enshrines the corporation – the local council – as the highest embodiment of public service and popular democracy. By extension, it justifies high public spending on municipal buildings to signal respect for self-governance and to reflect – and enhance – local patriotism.

If that seems extravagant, remember that Chamberlain’s early mentor was George Dawson, a nonconformist minister and a man who could talk unashamedly of ‘the new corporation, the new Church’. Dawson’s exalted vision of local government is best captured in the speech he gave at the opening ceremony of a new municipal library:

Such ideas seem almost unthinkable today when politicians are held in almost universal obloquy and even local councillors are often thought to be self-interested egotists. Chamberlain, by contrast, thought there was ‘no nobler sphere for those who have not the opportunity of engaging in imperial politics than to take part in municipal work.’

This was the Civic Gospel – a vision of municipal service in the broadest sense: service from the brightest and the best, service to a citizenry or those who might be raised to citizenry.

The Council House was ‘a bricks-and-mortar memorial’ to this gospel and begins to seem an almost modest embodiment of such ideals.(2) But it was designed also – by force of presence and in detail – to celebrate Birmingham and Birmingham democracy.  By 1879, the date of its completion, the building had cost some £163,000.  At today’s values, that’s a cool £12m or so.  Then, to many, it seemed money well spent.

Among the most striking decorative features of the building is the mosaic (by the Venetian artist, Salviati) above the main entrance . It portrays six figures representing Science, Art, Liberty, Law, Commerce and Industry. Tellingly, they are placed around a central, enthroned figure which represents Municipality.

Above this, within the central pediment, is a set of sculptures entitled Britannia receiving the manufacturers of Birmingham. She does so in friendly fashion, awarding wreaths of laurel. (No harping on about the depredations of industrial capitalism here.)

This does, of course, lead to an alternative reading of the politics of Chamberlain and the Civic Gospel. It was a triumphantly bourgeois politics, reflecting an industrial class and a local elite at the apogee of its power and self-confidence. The term ‘corporation’ hadn’t then acquired its later meaning but there is something apposite in the latter – the council run as a business by those with the status and means to do it.

Birmingham in its industrial heyday. The Council House with museum and art gallery extension are depicted centre. The collonaded Town Hall can be seen centre right and the Chamberlain Memorial erected in 1880 bottom centre.

Chamberlain himself became a Unionist (an opponent of Irish Home Rule) and an imperialist and there wasn’t much local self-government tolerated in either of those. His son Neville Chamberlain – a Birmingham councillor and mayor (‘a good mayor of Birmingham in a lean year’ according to an unfriendly Lloyd George) and a drier, more conventionally right-wing politician – seems even more removed from the reforming vision and ideals of the Civic Gospel.

Neville Chamberlain as mayor of Birmingham, 1915

But Neville founded the country’s only municipal bank and the record of achievement of Birmingham Chamberlainism (the only word that can capture the unique admixture of local politics) was impressive. As one frustrated local Labour politician stated as late as 1930, Birmingham’s ‘civic history [was] an inspiring record of the success and practicality of social ownership even,’ he added, ‘when administered by those who do not believe in it.’

However, if Birmingham’s middle-class reformers rejected socialism or any ideology of public ownership, they embraced business-like municipal enterprise and upheld a powerful vision of both the duty and potential of local government to improve the conditions of the people.

A municipal showpiece such as the Council House might not, on first impression, seem the best embodiment of these progressive ideals. But recall Joseph Chamberlain’s words above on the dignity of municipal institutions and Dawson’s ideal of their majesty. If we can’t, in these more jaded and cynical times, quite bring ourselves to go that far, we can at least remember a time when pride in local government was common and widespread.

(2) Tristram Hunt, Building Jerusalem. The Rise and Fall of the Victorian City, 2004

Asa Briggs has written the classic account but Tristram Hunt is the best recent source on Birmingham’s Municipal Gospel (as he prefers to call it.) Additional information on the architecture of the Council House can be found on the Victorian Web. My thanks to Jacqueline Banerjee of Victorian Web for allowing use of the photographs of the Council House mosaic and sculptures above.

1 thought on “The Council House, Birmingham: ‘a bricks-and-mortar monument to the municipal gospel’”