We were in Camden a few weeks ago – looking at the Alexandra Road estate – to visit that ‘magical moment for English housing’ when the local council was building some of the finest social housing of modern times.

We’re back to take a look at another of its most celebrated projects – the Branch Hill Estate (now Spedan Close) in Hampstead.  First, a warning.  If you go looking for it, it’s hard to find – buried in woodland, in a western section of the famous Heath, down two unmarked lanes – and hard to photograph.  But it’s worth the effort.

Camden Borough Council was formed in 1964, an amalgamation of the former St Pancras, Holborn and Hampstead Borough Councils.  Labour won 34 seats in the first elections for the new borough – 27 from St Pancras and 7 from Hampstead.  Aldermanic seats gave it an overall majority of 42 councillors over the Conservatives’ 28.

So far as the politics of the new Council were concerned: (1)

The general outlook was ‘left of centre’ and a radical activist view pervaded.  The councillors were determined to pursue policies which would further the development of the services transferred from the LCC, promote the physical redevelopment of the Borough and increase the amount of council housing.  The rising level of Council expenditure and of the rates was a secondary consideration to these aims.

That became evident in the development of Branch Hill.

Most of this radicalism came from St Pancras where, a few years earlier, they’d been flying the Red Flag over the Town Hall.  St Pancras had also built proportionately more council houses than any other council in the country in the post-war era and Camden Labour’s 1964 manifesto had pledged to continue ‘this effective housing policy…at rents you can afford’.

It was a young Council too – almost a third of the councillors were under 40 – conscious of its role in the progressive vanguard of London Labour politics.

One major element of the new Council’s housing policy lay in ‘buying any housing they could lay their hands on (some outside the borough)’ on the reasonable grounds that large-scale construction had little impact on council waiting lists when so many needed to be rehoused as a result of the redevelopment itself.  It was also envisaged as a means of halting – or at least slowing – gentrification. Between January 1973 and September 1974, the Council bought 3850 properties.(2)

But the Council is remembered today for its flagship housing schemes, of which Branch Hill was one – a deliberate statement that council housing and council tenants should not be ghettoised.  Where better than the leafy surrounds of Hampstead to put this principle into practice?

But such idealism came at a price in Hampstead.  In 1964 the Council paid £464,000 to buy an Edwardian mansion and its grounds off Branch Hill Road on the western edge of the Heath.  The house would become a care home; its land was earmarked for council housing.

The property came with a restrictive covenant stipulating that new buildings must be semi-detached and of no more than two storeys.  It says something for the vision of the Council’s Architects’ Department that they avoided constructing a little piece of suburbia. 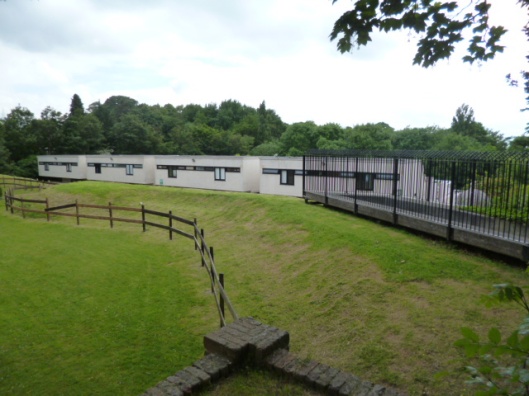 In fact, the architects, Gordon Benson and Alan Forsyth, schooled by their work with Neave Brown on the Alexandra Road Estate, and guided by Borough Architect Sidney Cook, came up with a scheme that some have likened to an Italian hill town.

That vision had first to survive some difficult politics.  The Conservative administration that ran Camden between 1968 and 1971 intended to sell the land for private development.  When the incoming Labour administration recaptured it for housing, the then Conservative government refused loan support.  The Council began building anyway and were rewarded by a change of government – and financial backing – when Labour won nationally in 1974.

The finished development comprised 21 pairs of two-storey houses in three rows, 20 five-person, 14 six-person and 8 four-person.  These were semi-detached in name only.  In fact, there are essentially three terraces, punctuated with a grid of walkways, built one above the other on the site’s steep slope.

The fabric reflects what had become Camden’s house style – external walls of board marked and smooth white concrete and dark-stained timber joinery, with the addition of red-brick paving for the walkways.

Also in keeping with the Camden style were the gardens and courtyards each house enjoyed.  But the solution was daring – garden patios were built on the roofs of the houses below and accessed from the living room by a bridge.  These were proper gardens, incidentally, with topsoil that allowed planting. A spiral staircase also leads down to a smaller courtyard area at the front of the house.

Reflecting this and to ensure light and views for each property, a split-level kitchen/dining/living room is on the upper floor with a main bedroom to the rear, children’s bedrooms below.  The accommodation conformed to Parker Morris standards but sliding partitions between the main bedroom and living room on the upper floor and between two small bedrooms on the lower floor allowed larger spaces and greater flow.

The estate was completed in 1978 and the first tenants moved in, it was said, ‘without fanfare’ – a choice on the part of the Council which probably reflected the degree of unwanted publicity the scheme had already attracted.

The Hampstead and Highgate Express had earlier concluded: (3)

These are the most expensive council houses in England, to their defenders an act of political faith, to critics socialism gone mad.

And, at over £72,000 each – well over the cost of contemporary private-sector equivalents – they probably were the most expensive council housing ever.  This expenditure reflects the high price of the site, additional works required to cope with difficult soil conditions and the spiralling costs of materials and labour as shortages of both emerged in the mid-seventies.  Building costs generally had escalated threefold in the period.

But principally, of course, it reflects the Council’s determination and the idealism of its architects to provide high-quality social housing.  To critics, this was naturally a provocation.  As one wrote: (4)

this bright young architect’s vision realised is now notorious and a favourite target for politicians and furious ratepayers … conceived as a social time-bomb it is an economic nonsense … it is financially irresponsible, a slap in the eye to the affluent neighbours whose view has been transformed.

Camden’s Tory leader was careful to wish the new tenants well but added that he opposed ‘the blind dogma and appalling waste which caused these houses to be built in the first place’.(5)  Camden Conservatives had earlier criticised the high rents of the new houses which, they argued, ‘made nonsense of Labour’s stated aspiration of “letting ordinary average people live in Hampstead”’.  For its part, Labour blamed the rising costs on building delays caused by the Conservatives’ desire to sell off the land.(6)

Which brings us to the crucial question: what did residents think of the estate?

To some extent, they voted with their feet.  Fifteen of the first completed houses were taken on first offer and those early tenants spoke highly of the estate, despite its expense and, in some respects, its inconvenience – there was quite a walk to the nearest shops and public transport.

It is just wonderful here, it is so peaceful. I think it is jolly good value, it is worth it to be up here…

This is something that the everyday person could not think to afford.

The set of sloping steps designed to give access to prams was universally criticised as ‘lethal’ but it has survived. 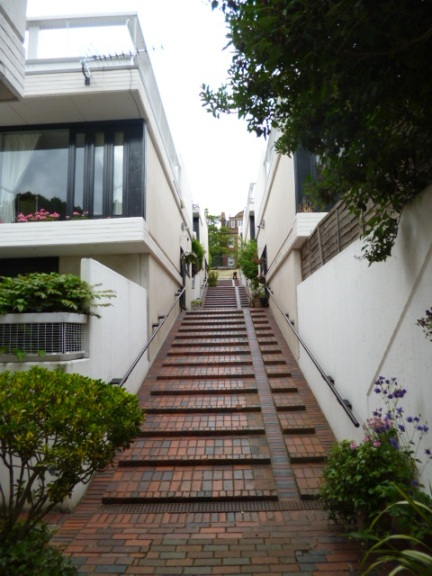 As has the estate itself, grade II listed in 2010, and with some style – a tribute to its architects and the council which backed them: (8)

I suspect lesser or wiser designers would not have got this far … a matter for reflection for all those that want to do the thing that is right rather than what the unthinking system tells them to do.

Of course, the system may not only be unthinking, it is often crushing.  We remember again that ‘magical moment’ that Camden enjoyed when relative affluence, political will and architectural vision combined to create ‘some of the highest quality council accommodation in the country’.(9)

Thanks too to the Camden Local Studies and Archives Centre, the home of much of the material cited above, and its helpful staff.

17 thoughts on “The Branch Hill Estate, Camden: ‘the most expensive council housing in the world’”