We know what the Daily Mail thinks of Marxists.  It held the same opinion in the 1920s. So, when Bethnal Green Borough Council decided in 1927 to name its new housing scheme the Lenin Estate, it was – almost literally – like a red rag to a bull (or red bull to a rag, if you want to be clever).

In reality, it’s a complex and, in some ways, rather sad story.

Labour first took control of Bethnal Green Borough Council in 1919, returning 24 councillors to the Liberals’ six.  The Party’s ‘uncrowned king’, according to the local press, was Joe Vaughan who would be Bethnal Green’s mayor for the three succeeding years.  As a member of the British Socialist Party and, from 1920, its successor organisation the British Communist Party, he was proclaimed by The Call ‘the only openly-avowed Bolshevik Mayor’ in the country.

But at a time of fluid politics on the left and when there was very widespread sympathy for the Soviet Union in Labour ranks, he was far from being the only Communist in the Bethnal Green labour movement.

The national Labour Party consistently rejected Communist Party affiliation but individual Communists could join the party and would, in any case, be frequently selected as delegates of affiliated trade unions.  This ‘Broad Left’ was particularly strong in Bethnal Green.  In a generally bad year for Labour, it held on to power in the Council in 1922 by the skin of its teeth.

By the time of the next local elections in 1925, it was, however, an increasingly fragile coalition.  Nationally, Labour had barred individual Communists from membership.  Locally, if local press accounts are to be believed, rival groups of ‘Communists’ and ‘Moderates’ had published competing manifestos.

Still, some kind of joint slate was engineered for the November municipal elections and local ‘Labour’ actually slightly increased its narrow majority.  Of its 17 councillors, it was said 12 were Labour and 5 Communist.  One of the latter, Joe Vaughan, was a leading figure in the National Left-Wing Movement founded in December to oppose Communist expulsions.  The national Labour Party expelled the Bethnal Green constituency party the following year for its continuing Communist links.

To disinterested observers, all these left-wing squabbles will seem far removed from the more pressing issue of the people’s housing.  But constructive politics did continue. 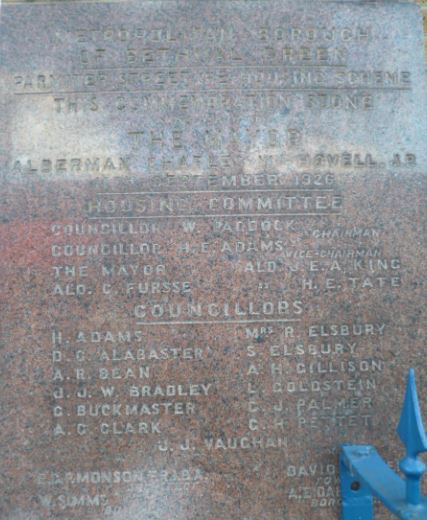 The commemorative tablet marking the beginning of the Lenin Estate – the Parmiter Street scheme as it was then known – was unveiled in September 1926, the Communist chairman of the Housing Committee, Councillor William Paddock, absent through illness. 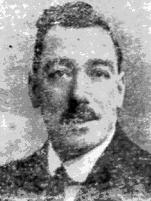 It would record the appreciation of members of the Council and their recognition of the great work he had done on behalf of the workers of the world…the children would be asking ‘Who is Lenin?’ and their parents, if they were honest, would be compelled to tell them what Lenin did for the downtrodden peasants of Russia.

To the Labour mayor, Alderman CW Hovell, on the other hand, it was:

an insult to the memory of men in the Labour movement who had passed to ignore them in favour of Lenin. He might have been all right in Russia but he was not, in his opinion, right for England.

A voice from the gallery called on Hovell to ‘Give up that chain!’ This was presumably a reference to his mayoral regalia rather than those chains which Marxists held to bind the workers of the world but, if not, it was a good pun.

A loan of £28,704 from the LCC financed the scheme – 32 two-bed and three-bed tenements in a handsome four-storey yellow-brick block designed by architect ECP Monson.  Even the politically hostile Bethnal Green News concluded the block was ‘magnificently constructed’ – though it gave credit for this to ‘Mr William Sims, the enterprising Stepney builder, who secured the contract’. (2) 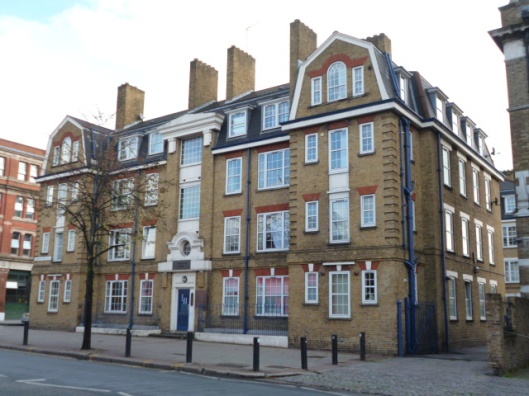 But the high quality of the accommodation did not meet universal approval.  The Evening News claimed that the estate was nicknamed ‘Buckingham Palace’ and suggested, solicitously, that ‘some of the tenants find it difficult to furnish the large rooms…The living room on the average requires 20 square yards of linoleum’.(3)

The new residents included a carman and his wife with nine children, the eldest of whom was just 14, and a hawker and his wife with six children. The newspaper went on to describe the Estate’s tenants as ‘typical Bethnal Greenites’ – ‘undersized people with oversized families’.

They were grateful for their new homes, however, whatever the paper thought:

It is all so beautiful we don’t know where we are.  You should see the place we left.

Sound-proofed floors and roofs, inbuilt ‘artistic dresser-cabinets’ and a ‘water heating system specially designed for rapid service’ must indeed have been a massive improvement on their previous accommodation. 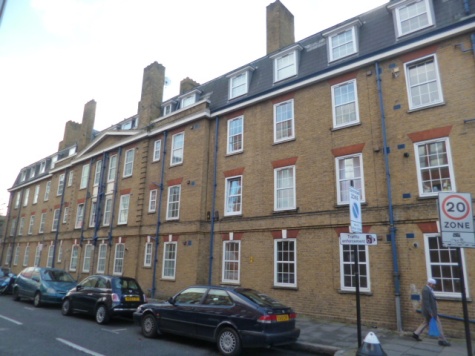 The name and quality of the flats were not the only points of controversy.  It was unfortunate, perhaps, that one of their first tenants was Councillor Paddock.  The appearance of favouritism was not dispelled by the circumstances of his selection.

The Council stated officially that 1235 applications had been received for the 32 flats.(5)  At the meeting of the Housing Committee to select the first tenants, it was alleged, of 19 applicants, that 15 were people occupying one room and of those only two had fewer than three children.  Only one applicant had three rooms and just two children. (6) That would be Councillor Paddock.

Paddock’s disingenuous statement to the press that his ‘name was on the waiting list and when my turn came I appeared before the housing committee, of which I am chairman, in the ordinary way’ seems, to put it kindly, to contain its own contradiction.

But there’s more. The Daily Mail also claimed that Councillor Paddock had stated no Jews would be granted tenancies in the new estate – at a time when they formed about 12 per cent of the local population and were among its poorest.  Others on the Council denied any policy of the sort but the attention given to the claim suggests it had some plausibility.

And then, conversely, there was the charge – backed by a sworn statement – that five Jewish residents of the borough had been persuaded to pay sums of money ranging from £5 to £3 10s ‘to a person or persons not unconnected with the Borough Council’ for the promise of a tenancy. (7)

Not surprisingly, not unreasonably, the press had a field day.  The Council promised an independent inquiry into all the allegations to be conducted, it hoped, by the Ministry of Health and Housing.  But the Ministry declined to become involved.

The Council regretted the decision and the delay which, it said, ‘must inevitably militate against the success of any inquiry that might now be undertaken’.  Moreover, it lamented the fact that it lacked the necessary statutory authority to conduct its own independent inquiry.

The conclusion?  ‘We are unable to suggest a course of action which will give effect to the very strong desire of the Council to take further action in this matter’.(8)  One can almost hear the collective sigh of relief and, with this, the matter was kicked into some very long grass.  I can tell you no more, I’m afraid, about the rights and wrongs of the matter and the individuals, if any, involved.

Except that some form of rough justice did pursue Councillor Paddock.  In September 1927 he was expelled from the Labour-Communist group on the Council and then from the Communist Party itself – ‘for acting contrary to the interests of the working class’.

At the same time, Paddock tried to resign from the Council but couldn’t afford the 5s (30p) fee required.  One month later, the matter was taken out of his hands.  He informed the Council he was in receipt of poor relief – this disqualified him automatically from Council membership.

The sense of a life unravelling becomes definitive in December when Paddock was sentenced to five months’ imprisonment for stealing funds from the Christmas Club of which he was secretary, trustee ‘and everything else’. (9)

And then there’s politics.  The Communist Party’s Minority Movement – intended initially to radicalise unions from within – began to shift to a more sectarian stance. And in the summer of 1928, the international Communist movement moved towards a radical ‘Class against Class’ policy which denounced the Labour Party as ‘social fascists’.  In Bethnal Green, local tensions no doubt added to the animus – on both sides.

In the borough council elections of November 1928, Communists attacked Labour followers as ‘scabs of the worst kind’ and promised to ‘fight them tooth and nail’.  Bethnal Green Labour, for its part, stood ‘loyally by the policy of the national Labour Party’ and ‘refused to accept the dictates of the Minority Movement which is governed by foreign political organisations which’, it added, in case there were any doubt, ‘means Russia’. (10)

In the event, Liberals took all 30 seats.   Labour congratulated itself on ‘putting the Communists at the bottom…the Communist Party will be wiped out and we will be in the position of a real proper Labour Party’. (11)  Five years later, the Labour Party did, in fact, achieve its own clean sweep of the Council.  The Communist presence  in the borough remained strong and militant but it would never again exercise power.

As for the Lenin Estate, amongst the first actions of the incoming Liberal administration was to rename it the Cambridge Heath Estate.  It remains a fine building but it’s been sold off and now it’s called Cambridge Court.  A ‘delightful two bedroom apartment offering high ceilings, stripped floor boards, bespoke storage and off street parking’ can be yours ‘in this highly sought after and fashionable location’ for £369,000 according to estate agents.

Just sometimes – only sometimes – all that political noise and effort seems like so much ‘sound and fury, signifying nothing’.

(1) This and succeeding quotes taken from ‘Honouring a Bolshevist.  BG Housing Estate to be named after Lenin’, Hackney Gazette, 25 July 1927

My thanks to the helpful staff of the Tower Hamlets Local History Library and its excellent resources.