In the week that we celebrate the sixty-sixth anniversary of the National Health Service, it’s appropriate to look another aspect of the hopes for a better and fairer Britain that many believed must emerge from wartime sacrifice and destruction.

The County of London Plan was commissioned by the London County Council, written by JH Forshaw (Chief Architect to the LCC) and Patrick Abercrombie (the most famous town planner of his day and Professor of Town Planning at University College, London) and published in 1943. It was a bold and comprehensive reimagining of the capital and, though most of its specific proposals were quickly forgotten in the austerity and necessary pragmatism of the post-war years, we should recall its ideals and vision – and perhaps learn from them too.

I can only give a brief taste of the Plan here.  It’s a richly illustrated hardback of some 188 folio pages.  That alone – the priority given to the publication of such a lavish tome at the height of the war – suggests its significance.  It sold 10,000 copies in 1943 and abridged versions were provided to schoolchildren and members of the armed forces.

King George VI and Queen Elizabeth with Sir Patrick Abercrombie and J. H. Forshaw at an exhibition for the London Plan

The LCC also mounted an exhibition in County Hall – the County Hall which is now an hotel and aquarium – attended by 75,000 people, including George VI and Queen Elizabeth, between July and August 1943. Educational packs of drawings, photographs and slides were produced to accompany talks and discussions on the Plan while a Penguin edition – less technical but including many of the maps and illustrations – was published in 1945. (1) 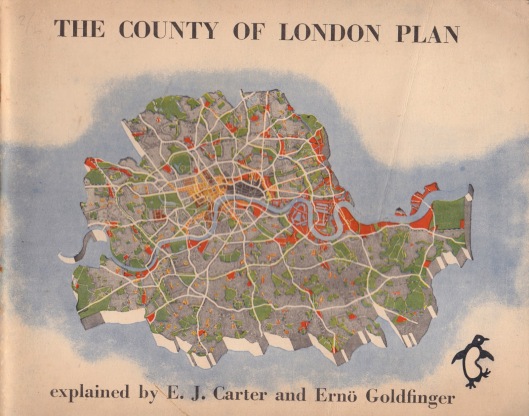 The front cover of the 1945 Penguin edition (with thanks to Delicious Industries blog: http://www.deliciousindustries.com/blog/from-the-reference-box-135)

Perhaps the most astonishing indication of the Plan’s reach is the poster below – it advertises a lecture given to British prisoners of war in Stalag Luft III, Sagan, then in Germany.  This was the camp made famous in The Great Escape.  It’s salutary to think that while those prisoners weren’t planning their great escape they were attending lectures on town planning: (2)

To modern eyes, there is something bitter-sweet in all this – in the irony that it is war that can unleash our most creative and idealistic ambitions for a better world; in the fact that war itself provided both the means – the power of the state and the collective will of the people – and the opportunity to rebuild.

Plan frontispiece. The caption reads: ‘”Most painful is the number of small houses inhabited by working folk which has been destroyed…We will rebuild them, more to our credit than some of them were before. London, Liverpool, Manchester, Birmingham may have much more to suffer, but they will rise from their ruins, more healthy and, I hope, more beautiful.”, The Prime Minister, 8 October 1940’

This was noted by Lord Latham, Labour leader of the LCC at this time, in his foreword to the Plan. (3)

But just as we can move mountains when out liberties are threatened and we will have to fight for our lives, so can we when the future of our London is at stake.  If only we will.  The economics are difficult, the timing is difficult, the moral, physical and intellectual effort is difficult, I do not believe, I do not think any one of us really believes, that any of these difficulties are insurmountable…The war has given us a great opportunity, and by the bitter destruction of so many acres of buildings it has made easier the realisation of some of our dreams.

In practical terms, the Bomb Damage Maps compiled by the LCC were to provide a vital resource to the planning team as they came to contemplate the task of reconstruction. (4)

The Beveridge Report – which would provide the foundations of our post-war welfare state – had been published one year earlier to massive public interest and acclaim.  Beveridge had famously identified the ‘Five Giant Evils’ – Squalor, Ignorance, Want, Idleness and Disease – to be conquered in this brave, new world.

Latham’s reference to Beveridge, therefore, had a deliberate and powerful resonance:

Sir William Beveridge has talked of giants in the path of social security.  There are giants too in the path of city planning.  There are conflicting interests, private rights, an outworn and different scale of values, and lack of vision.

Against this dramatic background, the details of the Plan might seem almost prosaic but, of course, it was in just such detail that people’s hopes for a better world would be realised.  In this moment, at least, planners – who would later come to be reviled for the mistakes they made and (in some cases) the destruction they wrought – stood in the frontline of social transformation.

Planning became the mantra of the day – both as a principle and as a means towards comprehensive reconstruction.  This was a stark and very conscious rejection of a world in thrall to the free market and private interest – the results of which had been experienced by millions in the economic slump of the 1930s and were lived daily in the urban squalor that characterised life for most working people.

In the London context, Forshaw and Abercrombie lamented the lack of any effective planning before the war: ‘In fact, London at that period might be described as more planned against than planning’ – a reflection of the inadequacy of local councils’ powers, their financial weakness and a lack of regional and national coordination.

In contrast, they proposed what they believed to be a middle way, rejecting both those who argued against any planning controls (or who believed, more positively, that ‘organic’ growth was desirable) and some who suggested that London be allowed to die and its population dispersed.  In contrast, the Plan advocated ‘conditioned yet comprehensive replanning’ – ‘to endeavour to retain the old structure, where discernible, and make it workable under modern conditions’:

The Plan now submitted is designed to include the best of existing London, to enhance its strongly-marked character, and to respect its structure and spheres of activities, but at the same time, and drastically if need be, to remedy its defects.

Given the scale and range of ‘defects’ the authors identify – traffic congestion, poor housing and ‘the obsolescence of the East End’, ‘inadequate and maldistributed open space’, ‘indiscriminate mixed development’, ‘lack of coherent architectural development’ – it’s no surprise that the Plan’s proposals actually do seem quite drastic.

Positively, the Plan set out to address ‘three major aspects’ of London life – ‘as a Community where people, live work and play; as a Metropolis – the seat of Government and a great cultural and commercial centre; and as a Machine, with special reference to the machinery of locomotion’.  I’ll concentrate on the first and we’ll look at that more closely next week.

Abercrombie was also the author of The Greater London Plan published in 1944. A documentary, The Proud City: a Plan for London was released in 1946.

The County of London Plan was one of a number produced during the Second World War.  The most famous plan – also by Abercrombie and the one which was most fully implemented – is that for Plymouth.  I have written about that in two posts:

Abercrombie partnered with Sir Edwin Luytens to write A Plan for the City and County of Kingston Upon Hull published in 1945. The City of Manchester Plan, published in 1945,  is available online.