Balfron Tower is now one of the stately homes of England – a National Trust attraction no less.  Recently it’s hosted an arts season, a Shakespeare play, and it’s provided live-work accommodation for twenty-five artists since 2008.  And all that, to be honest, makes me sad because once Balfron was simply housing for the local people who needed it – although its size and style and big name architect did always get it special attention. 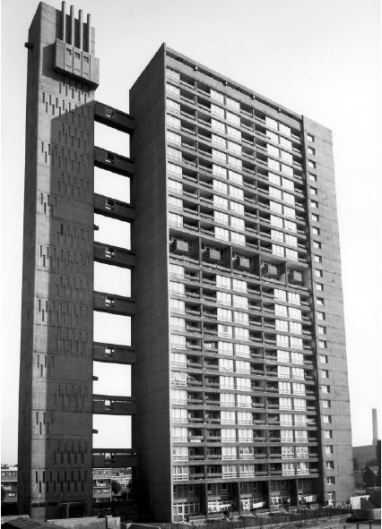 The site for what is currently the Brownfield Estate, in which Balfron is located, had been identified as early as 1951.  The now truncated St Leonard’s Road was one of Poplar’s principal streets; the area as a whole comprised a dense grid of old and substandard terraced housing.  The land was acquired in 1959 just as the new Blackwall Tunnel Northern Approach to the east was cutting its own brutal swathe through these old streets.  In 1963, the London County Council asked Ernő Goldfinger – one of the most celebrated modernist architects of the day – to design the first buildings of the new development.

Rowlett Street Phase I, as the Balfron Tower was originally known, was built – by the LCC’s successor body, the Greater London Council – between 1965 and 1967 and officially opened in February 1968 by Desmond Plummer, leader of the GLC.

It is 26 storeys and 276 feet high – in plain construction terms, ‘an in-situ reinforced concrete cross-wall structure linked to the service tower by precast concrete bridges at every third floor’. (1)  It contained 146 homes in all, 136 flats and 10 maisonettes.  The maisonettes were located at ground level and on the 15th floor – the latter provides the distinct break which can be seen in the otherwise uniform façade of the Tower.

The idea of a service tower had been pioneered by Denys Lasdun at Sulkin House and Keeling House in the 1950s.  Its advantage, as Goldfinger pointed out, was that ‘all noisy machines, including lift motors, water pumps, fire pumps, rubbish chutes, and the boiler house at the top, are completely insulated from the dwellings’.   Noise within the flats was also reduced ‘sideways by a 9 inch concrete wall and top and bottom by a 1 foot thick concrete floor’.  It wasn’t so easy to deal with the near-motorway just outside the block. 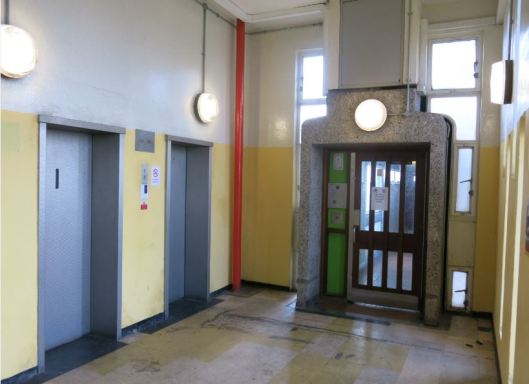 The service towers also contained two communal laundries and ‘hobby rooms’ for teenagers, one for table tennis or billiards and the other set aside – in language which must have been a little dated even for its time – as a ‘jazz/pop room’.  Decades later, in a rather more authentic demonstration of youth culture, the Tower was home to pirate radio stations which made good use of its commanding height.

Goldfinger hoped that the large balconies provided for each home would provide a play area for toddlers; ‘a sunken play area with slides, towers, water and a sandpit’ was located at ground level with a day nursery to follow.  He acknowledged that ‘common shopping and welfare facilities’ were lacking – as they were in so many estates in which councils understandably prioritised the immediate pressing need for roofs over heads.  This, he said, was a problem which needed to be solved on ‘a political plane’.

As for the height of the block, Goldfinger was sure this was a positive: ‘The whole object of building high is to free the ground for children and grown-ups to enjoy Mother Earth and not to cover every inch with bricks and mortar’.  (2)

Goldfinger was a larger-than-life character and this makes it easy to conflate the building and the man and see both as somehow ‘brutal’ – more concerned with a showpiece building than the lived experience of its residents.  In fact, he recognised clearly that:

the success of any scheme depends on the human factor – the relationship of people to each other and the frame of their daily life which the building provides.

Goldfinger hoped, perhaps a little optimistically, that the access galleries – he counted the number of front doors on each, 18 on seven of the levels – would form ‘“pavements” on which the normal life of the neighbourhood’ might continue ‘very similar to a “traditional East End” street’.

Those corridors weren’t exactly ‘streets in the sky’ but he saw their design as far preferable to a traditional point block where only a few flats could be arranged around a single internal corridor.

Such were the good intentions and it’s worth recounting them to remind ourselves that these Brutalist blocks were designed – above all and for all their drama – to provide good homes for ordinary people.  (The same is true of the even more heavily criticised Robin Hood Gardens estate nearby, designed by the similarly controversial Smithsons.)

In fact, it’s often the acolytes rather than the architects themselves who most deserve criticism.  There’s an astonishing amount of writing about Balfron Tower which simply fails to register that it was housing at all.

Then there are the architectural descriptions which seem to celebrate the more dramatic but arguably inhuman features of its design, reaching their nadir in this account of Balfron by Goldfinger’s former collaborator, James Dunnett: (3)

It is as though Goldfinger, from among the Functionalist totems, had chosen as a source of inspiration the artifacts of war. The sheer concrete walls of the circulation tower are pierced only by slits; cascading down the facade like rain, they impart a delicate sense of terror.

Lynsey Hanley, perhaps unfairly critical of Balfron elsewhere, was very reasonably critical of this: ‘is living in a council flat supposed to be delicately terrifying?’ (4)

Internally, of course, the flats were spacious and airy with a quality of fixtures and fittings that very few of their residents would have enjoyed before.  And the views were wonderful.

The contemporary view to the west

Among the first to move in were an unusually affluent couple from Hampstead – Ernő and Ursula Goldfinger.  They moved in to flat 130 on the 25th floor (now refurbished with sixties kitsch as part of the National Trust tour), paying as was proper the full rent of £11 10s rather than the subsidised figure of £4 15s 6d due from tenants.  They stayed two months.

to experience, at first hand, the size of the rooms, the amenities provided, the time it takes to obtain a lift, the amount of wind whirling around the tower and any problems which might arise so that I can correct them in future.

In next week’s post, we’ll see how that experiment went, we’ll assess how Balfron Tower succeeded as social housing for its more usual residents, and we’ll examine the twisted politics which have brought it to its current sad state.

(5) Quoted in Nigel Warburton, Ernő Goldfinger. The Life of an Architect (2004)