Sheffield built around 28,000 council homes between the wars.  It would also become, in 1926, the first major city to be run by the Labour Party.  Labour’s criticism of the council’s penny-pinching and cautious housing programme was a major factor in jettisoning it to power.  Its subsequent housing programme has arguably been key to its maintenance of power for all but two one-year spells since.

In 1919, however, even the Citizens’ Alliance – the anti-Labour coalition which governed until 1926 – was swept up in the patriotic fervour and political imperative to do something for the ordinary men and women who had sacrificed so much in the Great War.

It commissioned Patrick Abercrombie to draw up a Civic Survey and Plan with the specific brief to formulate a strategy which separated industry and housing.  His 1924 report – which Abercrombie described as the foundation of his later work – recommended zoning of factories and homes and the creation of new satellite towns within a green belt.  Little of this was implemented but Sheffield did construct a number of large cottage suburbs. 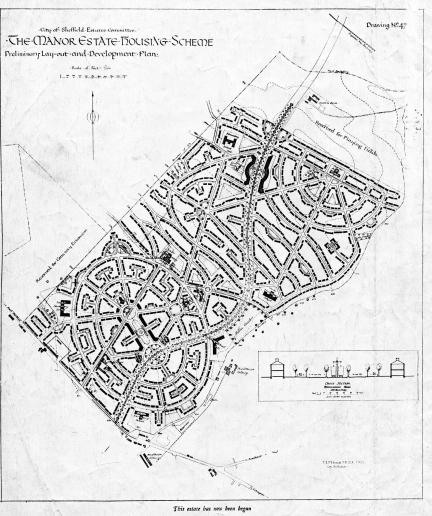 The Manor Estate was the largest of these, built between two and three miles from the city centre, on 470 acres of land purchased from the lord of the manor, the Duke of Norfolk, in 1919. Of this, 350 acres was set aside for 3754 houses – solid two and three bedroom houses with generous gardens, 70 acres for playing fields and 37 acres for public buildings. Construction began in 1923 and some 2697 homes built in the 1920s. (1)

The overall design approved in 1921 – a geometrical layout of intersecting circles – owed something to contemporary garden city principles but has been criticised for paying ‘little regard to Sheffield’s natural contours’; the general effect, it has been said, is ‘bleak’. (2)

The Manor in its early years. Stills taken from Channel Four, On the Manor (1986 documentary)

The anti-Labour coalition also showed some early initiative in beginning a large slum clearance programme just a mile south-east of the city centre in what would become the Wybourn Estate.   The Coalition’s drive for economy, however, marked the Estate – tenants were required to pay 2 shillings a week if they wanted hot water and electricity not supplied as standard. 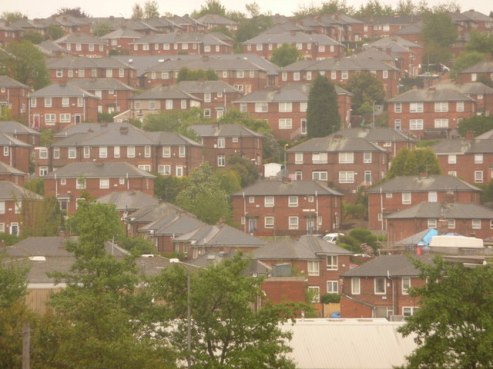 Wybourn © Chris Downer and made available under a Creative Commons licence

Labour was critical of this parsimony and the estates’ lack of community facilities.  On the Manor Estate, for example, there were 3000 school-age children on the Estate and school places (in wooden huts) for just 232 in 1926.  It was critical, too, of the expense of these homes built by private contractors and their poor workmanship.   After 1926 the Council’s Direct Labour Organisation would build most of Sheffield’s new council homes.

One of the first estates commenced by the new Labour administration was Wisewood built on farmland in the Loxley valley to the north-west of the city.  Some 901 homes were built here between 1928 and 1931 at an approximate cost of £400,000.

Houses on the Wisewood Estate

The Estate became known as the ‘Buttons Estate’ because so many of the new residents wore uniforms at work – a reminder (as in the Dover House Estate in Putney, known as ‘Uniform Town’) that many of the first council house dwellers belonged to the better-off working class employed in the public services.

However, in Sheffield as elsewhere, greater emphasis was placed on clearing the slums and rehousing slum-dwellers in the 1930s. In Sheffield, 24,374 houses were demolished under clearance and demolition orders by 1938 and – at 44 per cent – its rate of replacement of these homes was the highest in the country.

In some spirit of economy and in the attempt, more significantly, to make these homes affordable to a less affluent working class, the Council reduced the number of larger three bedroom and parlour homes on these later estates.  But it maintained high standards and resisted the charge made by the Ministry of Health that it was exceeding minimum requirements.  It admitted doing so in providing both gas and electricity to homes but refused to reduce its specifications on the grounds that ‘immediate saving would be offset by later cost of repairs’. (3)

The Council was ahead of the game also in providing community facilities on the estates.  The Manor Community Centre opened in 1933 was the first built by any local authority and in 1938 the Council announced plans for a programme of centres on the new estates at a cost of £120,000.  This moved Alderman Jackson of the anti-Labour opposition to describe the Sheffield’s council tenants as ‘the pampered pets of the Corporation’.

More objective social research gives the lie to such a statement.  Several social surveys were carried out on the Wybourn Estate in the early thirties.  In Wybourn, with a poorer population than some, it was found that 35 per cent of one-time tenants had moved back to the inner-city, chiefly as a result of the relatively high rents charged on council estates – two thirds of interviewees had paid rents of less than 7s before moving whereas a three bedroom council house in 1931 cost 10s 6d to rent.  Just over seven per cent of residents were paying over a third of their wages in rental costs.  (4)

There was little help from social services, but your neighbours helped as best they could. If you couldn’t pay, you just had to move to somewhere you could afford.

If ability to pay wasn’t a sufficient check on tenants’ respectability, there also the ‘man who came round and checked you were maintaining your garden properly and if you hadn’t then the council would take some sort of action’.

Although overcrowding was a far greater problem in the inner-city slums where over half the homes exceeded standards, it was a problem too in Wybourn where some larger families had opted to live in smaller and cheaper two-bedroom homes and others had – contrary to regulations – taken in lodgers.  Twelve per cent of homes were overcrowded on the Estate.

Interwar housing on the Manor Estate. The narrow deep windows are a feature of much of Sheffield’s municipal housing in this period. © Keith Pitchforth and made available under a Creative Commons licence

For all that, most respondents praised their new environs and believed them healthier and one tenant described their relocation from Attercliffe to the Manor as moving to their ‘mansion on the circle’. (6)  There are some, knowing Manor’s more recent reputation, that would find that surprising.  We’ll tell that story next week.

(6) A long-term resident of the Estate quoted in John Flint, David Robinson (eds), Community Cohesion in Crisis? New Dimensions of Diversity and Difference (2008)

4 thoughts on “Sheffield’s Interwar Council Estates: ‘the pampered pets of the Corporation’”