Most people probably think of Lancaster as very much a county town but in the nineteenth century it emerged as a major industrial centre and one with typical problems of slum housing and the new imperatives to decently house its working-class.  Though the industry has gone, that legacy remains in large council estates – some excellent of their kind, some not so good – bearing the common scars of communities hard-hit by de-industrialisation.

Lord Ashton and his Lune Mills in their heyday

It was a Liberal town (it became a city in 1937), firmly led in that direction by its major employer, Lord Ashton of Williamsons’ linoleum works.  He was a benevolent employer and generous benefactor of the town – until crossed.  When an Independent Labour Party candidate almost won a seat on the borough council in 1911, Ashton sacked 30 employees who had backed the socialist candidate and rescinded wage agreements.  He sulked for the rest of his life, dying in 1930.  His company went from strength to strength in the meantime, employing 4400 – a quarter of the local workforce – at peak until hit by the new global economics of post-45 and finally closing in 1999.

The Liberal council had opened a municipal lodging house before the 1914 but built no housing.  However, it hit the ground running at the end of the war and had selected three potential sites for council housing by December 1918.  In the event, problems of process and finance would delay the beginnings of the Bowerham Estate in Scotforth (on the southern fringes of the town) till 1920 and Lancaster would build only 69 houses under the 1919 Addison Act.

But they built well, impressing even the local middle class (though the terminology is revealing): (1)

The whole scheme, in design and execution, is a tribute to the ingenuity and ability of the Borough Engineer.  At the outset, the houses…were subject to a good deal of adverse criticism on the part of townspeople… Quite a number of ratepayers have visited the colony from time to time, and it has been noticeable that there is a distinct change in the public attitude towards the new houses.

The Estate was built on garden city lines with care given to the design of individual homes – a ‘charming feature [was] that there are no two gables actually alike’ whilst some of the exteriors were of ‘plain brick fronts others are rough cast in the upper portion of the walls, and in each case this rough cast is ornamented with an artistic little design in red tile or brick’. (2) 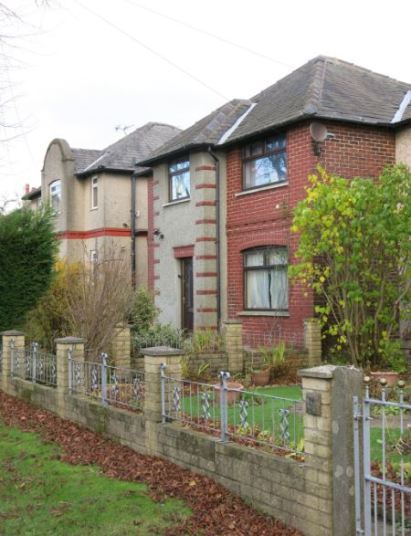 Typically, as economy measures kicked in, later schemes were less attractively designed.  The Newton Estate, located on ‘an insignificant strip of land between the canal and an industrial area on a sector of the town’s perimeter not previously even used for housing’, initially comprised 54 houses built under the 1923 Chamberlain Act in connection with a slum clearance scheme.  A further 192 homes were added under the 1924 Wheatley Act.  There was apparently no distinction to mark their varying provenance ‘except in the higher proportion of the larger parlour type houses and a somewhat higher standard of garden upkeep in the latter case’. (3)

Further building followed – between 1927 and 1930, the Corporation erected the Mount Pleasant Estate of 352 houses, closer to the spirit of earlier Addison-inspired schemes with a greater variety of housing types and tree-lined streets.

Two years later, the Council began the Ryelands Estate, 346 non-parlour, pebble-dashed houses lacking trees and the cheapest to build of any of Lancaster’s interwar developments.  For all that, the Estate seems to have enjoyed a good reputation – ‘When we first went on…Ryelands was absolutely the tops. They used to put their names down for Ryelands, they couldn’t get on to Ryelands’. (4)

A building trades worker, whose job on the Estate included showing tenants around their new homes and introducing them to its mod cons, recalls the pleasure of many:

A lot of the ladies had tears in their eyes. They were so pleased, they almost tried to kiss me and I was only nineteen! They said ‘Wait till I show my husband this house, it’s lovely.’

The Corporation’s next major scheme, the Marsh Estate, started in 1934, never enjoyed quite that reputation.  It was built – literally – on the wrong side of the tracks, on low-lying land to the west of the centre and railway line and close to the Lune Mills site of Williamson’s lino works. 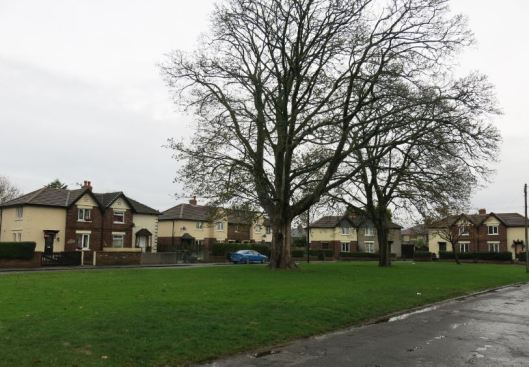 We’ll come back to the Marsh later.  First, we’ll draw a contrast with Lancaster’s last interwar estate, Hare Runs. Though both the Hare Runs and Marsh Estates were built under the 1930 Housing Act to relieve overcrowding, the former was built to plainly higher standards.  Its 306 homes, of exterior brick rather than pebbledash, came in a range of designs, some with gables and bays, and neat brick walls surrounded the gardens. The Council allegedly took care to direct the ‘better’ tenants to this better estate.

In general, these new council houses were well-liked by their new tenants.  One long-term resident recalls moving into a new home in the 1920s: (5)

It had a bathroom that was another luxury…and what my mother particularly enjoyed was hot water from the boiler, just open the tap and that was it, smashing.  And there was an open space at the back and a garden to sit in. You could see some green grass instead of flags and cobbles.

Her circumstances – she was the youngest of seven children, her father a labourer earning £1. 0s 3d a week, his wages supplemented by her mother’s sales of home-made pies – remind us what a difference council housing could make to the lives of the poorest of the poor at this time. 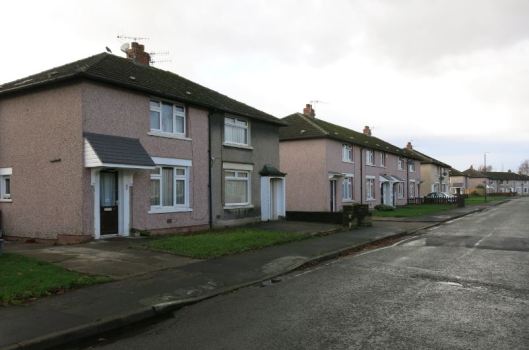 This was particularly true of the Marsh Estate – though its 286 houses of one to four bedrooms were of uniform and plain rectangular design – which catered primarily for those moving from the slums.  To take just one example, two sisters remember moving to Chestnut Grove (all the streets were given perhaps unsuitably sylvan names) in 1935 from Blue Anchor Lane in the town centre – a narrow lane since cleared where four homes shared just one toilet. (6) 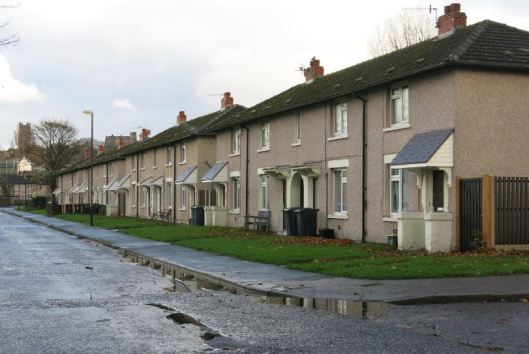 Whilst all Lancaster’s older council tenants recall the efforts of the Council to enforce cleanliness and propriety in its new estates, perhaps this was felt most strongly on the Marsh whose residents were feared to be less ‘respectable’.  It was common to employ female officers at this time, the better to police housewives’ domesticity, and powerful memories remain to this day of the lady rent collector, the formidable Miss Baines:

Miss Baines was a real old biddy, she was. She was the housing officer and everybody did exactly what she said. She used to come round every Monday, to the house, and go through every house…She used to go right through the house, top to bottom.  If it was dirty you got a warning: ‘Get it cleaned up or else you’re out!’

It was said that – at a time when households were lucky to have one set of sheets per bed – that children frequently slept without them on a Sunday night so clean sheets could be presented for the Monday inspection.

One wonders what Miss Baines would have made of 808 Marsh Estate, a local gang whose rivalry with the rival 902 Ryelands Crew was said in 2005 to have ‘brought terror and destruction to the Marsh area of Lancaster’. (7)  Whatever we make of the media’s tendency to dramatise, there’s no doubt that the Estate had severe problems and perhaps ones that would not have been susceptible to Miss Baines’ tender charms.

The closure of the lino works had left the area with very high unemployment – less than a third of adults were said to be in work (the lowest proportion in Lancaster) in 2000 and the 3000 people of the Estate felt neglected and poorly served.  With under one in five of residents having access to a car, recent cuts to the local bus service had only added to the difficulties: (8)

The Marsh generally has a poor reputation amongst residents of other parts of the Lancaster district, although this is generally based on hearsay and media reports rather than personal experience.  This stigmatisation compounds the problems presented by the lack of services in the area. The reception that Marsh residents, particularly young people, receive outside the area leads to a reluctance to venture into the town centre to access services.

Fortunately, the story doesn’t end there.  The Marsh Community Action Group had been formed in 1998 and, with grass-roots effort, council support and the hard work of dedicated volunteers, it succeeded in raising over £400,000 to build at long last a community centre for the Estate.  A Lottery grant has provided the cash to maintain the impressive range of schemes and initiatives that the centre runs, including a ground-breaking Territorial Tensions Project to redirect positively the frustrations and misplaced energy of some of Lancaster’s young people. (9)

All this reminds us that council estates, born in hope to help shape a better future for all our people, have reflected the circumstances – good and bad – that have shaped our wider society but typically they have experienced them at the sharp end.  That better future remains something we need to fight for as the residents of the Marsh – and elsewhere – have shown.

I’ll be taking a break from posting over the next couple of weeks (you can still follow me on Twitter) so I’ll take this opportunity to wish all readers a very happy Christmas and New Year, especially those working in our public services fighting to stop that phrase becoming anachronistic.

(1) Lancaster Guardian, 26 November 1920, quoted in DR Beattie, The Origins, Implementation and Legacy of the Addison Housing Act 1919, with special reference to Lancashire, University of Lancaster PhD, 1986

(5) Quoted in Elizabeth AM Roberts, Working Class Barrow and Lancaster 1890 to 1930, Centre for North-West Regional Studies, University of Lancaster, Occasional Paper No. 2, 1976

(6) Quoted in Lambert, Memories of Lancaster

(9) Full details of the superb work of the Marsh Community Centre – including the Territorial Tensions Project – can be found on their website.

9 thoughts on “Interwar Council Housing in Lancaster: ‘Wait till I show my husband this house, it’s lovely’”