I’m delighted to feature this guest post by Gerry Mooney of The Open University in Scotland and its follow-up next week. You’ll find additional details of Gerry’s work and writings at the end of the post.

On October 9 2015, the BFI London Film Festival screened the UK première of the late JG Ballard’s 1975 novel, High-Rise. (1) The story revolves around the residents of a 40 storey tower block and the gradual deterioration in relations between them all. Elsewhere in October 2015 other high-rise tower blocks have been in the news. Two days following the London screening, a set of high-rise housing blocks in Glasgow was demolished. (2) 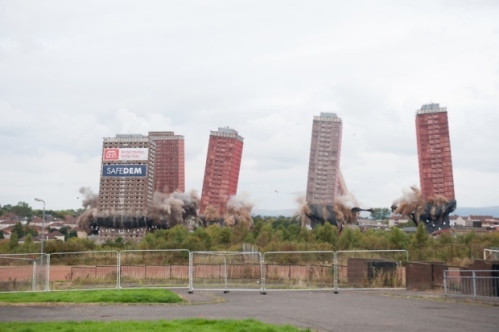 Demolition of the remaining Red Road flats, October 11 2015 © The Scotsman and John Devlin

At one level there appears to be little to connect the fictional account of life in a high-rise as described by Ballard and the reality of what was life for the residents of some of the highest tower blocks in Europe at the Red Road in Glasgow. Ballard’s tower block was equipped with all the necessary amenities that its residents –all middle-class professionals – would wish to have around them: swimming pools, a supermarket, school and so on.

While the Red Road flats had an underground bingo hall and some limited shopping facilities nearby, the lack of amenities – particularly for younger residents – was a hallmark of what came to be regarded as a failed housing experiment. The class structure of Glasgow’s Red Road Flats was sharply distinct from that of the tower block in Ballard’s story. This was not a place for middle class professionals – but for working class Glaswegians, many of whom who had previously been living in housing that was often run down and unfit for human habitation, largely in old tenement blocks in central areas of the city.

The rationale behind the construction of the Red Road Flats, and their subsequent decline, can best be understood when placed in the context of Glasgow’s historic housing problems and patterns of industrial decline in the post-1945 era. 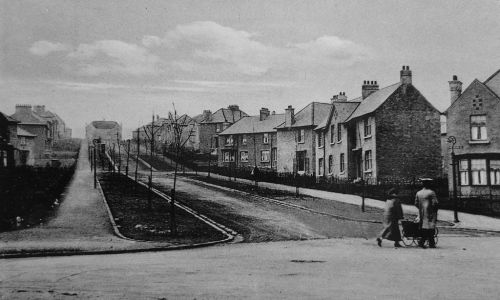 The 1920s Mosspark Estate in the south-west of the city: an early cottage suburb © Wikimedia Commons

During the 1920s and 1930s, in the first waves of council housing development following the 1919 Housing and Town Planning Act – and subsequent housing legislation in 1924, 1930 and 1935, Glasgow Corporation built a number of housing estates across the city. In doing so a particular classed geography came to characterise the landscape of Glasgow at that time. 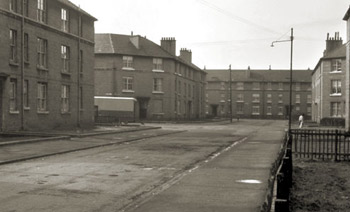 Each of the inter-war housing acts provided accommodation for different classes of Glaswegians with housing built under the auspices of the 1919 Act representing the best housing – for what was then the labour aristocracy of industrial Glasgow. In the 1930s, by contrast, poor quality slum clearance housing was built for a lower class of tenant – and the housing constructed to very different, and as befitted the target population – much poorer standards, even if they were better than the dilapidated tenement slums. (3)

Carnoustie Street tenements, 1930s, in what is now the long demolished Tradeston area south of the River Clyde

Despite the building efforts of Glasgow Corporation during the 1920s and 1930s, Glasgow emerged from World War Two with enormous housing problems. It was then by far the most overcrowded city in the British Isles. 44 per cent of the entire housing stock was considered to be overcrowded and, in figures which today defy belief, 1/7th of the entire Scottish population, note Scottish population not just the population of Glasgow, lived within 3 square miles of central Glasgow.

As with other UK cities, urban and regional planning was gaining momentum, not least as a means of addressing the widespread social and economic problems that characterised many of the older industrial cities and conurbations at the time. Glasgow’s problems – and those of the Clydeside conurbation more generally – were among the worst, if not the worst, in Britain. Together with the severe overcrowding problems, many houses were unfit and/or lacked basic amenities. Poverty, unemployment, ill-health and long-term problems of economic and industrial decline were all too evident. 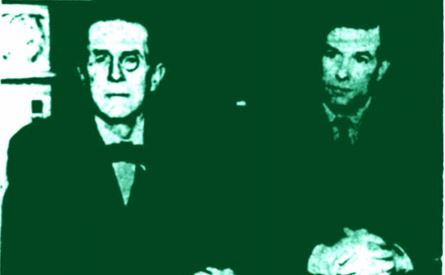 Headed by Sir Patrick Abercrombie, The Clyde Valley Regional Plan of 1946 (4) called for the decentralisation of Glasgow’s population who would be rehoused in purpose built new towns and in ‘overspill’ areas. ‘Overspill’ suggests a rather technical approach to planning but this was nothing more than the large-scale social and spatial engineering of a substantial proportion of Glasgow’s population. In turn industry would be directed away from the city to these overspill districts and new inward investment from foreign companies encouraged to avoid Glasgow.

The centre of Glasgow re-imagined in the 1945 Bruce Report

The CVRP’s recommendations stood in sharp contrast to the conclusions of another major planning report of the time. Produced for the Corporation of Glasgow, The Bruce Report of 1945 (5) was the work of the Corporation’s Chief Engineer, Robert Bruce. Its proposals were very different to those that would emerge in the CVRP a few years later in that it recommended the large-scale redevelopment and rebuilding of Glasgow to enable its growing population – then approaching its 1951 peak of 1.1m – to be rehoused entirely within the existing city boundaries. This would necessitate the wholesale clearance of huge areas of central Glasgow and the development of four large housing estates on the outer edges of the city – often referred to as ‘peripheral’ or ‘outer’ estates – and numerous other smaller council estates across the city.

While the fashion of the time for lower density housing was reflected in Bruce’s proposals, it was to become evident during the late 1940s and early 1950s that Glasgow would not be able to rehouse its population within the existing confines of the city. The expansion of the city into neighbouring districts was prevented by the establishment of a green belt around Glasgow, which meant that population overspill was the only answer – or the building of new housing estates on the periphery to higher densities than had been envisaged in the Bruce Plan. This created a legacy that was to come back and haunt the city in the period to follow, and which continues to shape Glasgow’s housing estates today. 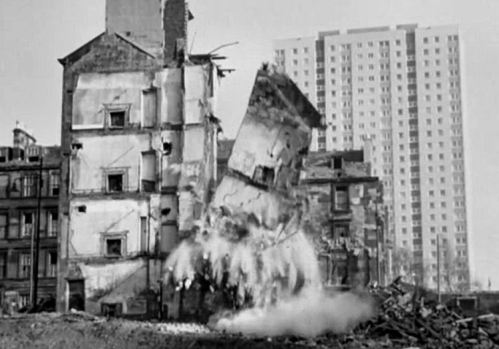 The demolition of tenements and their high-rise replacement shown in an undated photograph from Parliament Road in Townhead.

The conflict between these two competing visions of post-war Glasgow was to shape the development of the city throughout the post-war period. Each of the reports saw important proposals enacted but the overspill and new town proposals of the CVRP came to dominate the post-1945 planning of the Clydeside conurbation and within that, of course, Glasgow itself.

Taken together, the Bruce Plan and CVRP led to the large-scale demolition of many working class residential districts in Glasgow – and the ‘decanting’, displacement and rehousing of upwards of 250,000 Glaswegians. Older tenemental areas were bulldozed, family and community life disrupted, and older senses of attachment and of belonging to particular places were also disrupted in the process. For Bruce this was a radical plan, a ‘surgical plan’ in his words for the renewal of Glasgow through what today may be referred to as a process of ‘creative disruption’.

From the Peripheral to the Vertical: Glasgow Embraces High-Rise

With the peripheral estates under development in the 1950s, amidst the growing awareness by Glasgow Corporation that it was to lose a substantial proportion of its population through overspill, the city’s leaders were still determined to rehouse as much of the population as it could within the city and, in seeking to do so, the eyes of the leaders of the politicians and planners turned upwards! Glasgow was to embrace like no other city, high-rise housing development.

In 1947 a Glasgow Corporation delegation travelled to the French city of Marseilles to see at first hand the new tower blocks designed by famous Swiss architect, Le Corbusier as part of his Cité Radieuse (Radiant City). Constructed between 1947 and 1952, this was to be a hugely influential development, not least on the visitors from Glasgow.

In 1953 Glasgow’s first ‘multi-storey’ housing was constructed at the Moss Heights, in the Cardonald area in the South West of the city. On their opening the then Chairman of Glasgow Corporation’s Housing Committee commented: (6)

Let the planners check that all available city land is being built on. Let them push the frontier upwards instead of outwards. Where 10 floors are planned let them build 20 instead.

The scene was thus set for Glasgow’s foray into high-rise housing and the development of these blocks over the next half century or so was to reshape the city in ways that few could have imagined at the time.  We’ll examine what followed in next week’s post.

(3) Sean Damer, From Moorepark to Wine Alley: The Rise and Fall of a Glasgow Housing Scheme, Edinburgh: Edinburgh University Press (1989)

(5) Robert Bruce, First Planning Report to the Highways and Planning Committee of the Corporation of the City of Glasgow, Glasgow: Corporation of the City of Glasgow (1945). For more on Bruce’s proposals, see BBC 4: Dreaming the Impossible: Unbuilt Britain, A Revolution in the City: The Bruce Plan for Glasgow, August 21, 2013 and ‘The Bruce Plan‘ from the bestlaidschemes.com website.

Gerry Mooney is Senior Lecturer in Social Policy and Criminology in the Faculty of Social Sciences at the The Open University in Scotland, his academic profile here.  For additional information and writings, see his OU OpenLearn page. He has also written for The Conversation and you’ll find his dedicated pages here.  Follow Gerry on Twitter at @gerrymooney60.