Back in July 2013, in the very early days of this blog, I attended an invaluable conference hosted by the Institute of Historical Research entitled ‘Mobilising London Housing Histories: the Provision of Homes since 1850’.  I’m pleased to see some of the fine contributions to that conference collected and revised for publication in this new book.  It’s a diverse volume, though pleasingly designed and well-illustrated throughout, with no central theme other than that we can and should learn from our housing history.  As David Kroll’s Introduction suggests:

The book does not provide solutions, but rather affords glimpses into aspects of how similar problems to those faced now were dealt with in the past.

To get the most from the book, accept that simple premise and, in the meantime, enjoy some well-researched and well-written chapters covering a wide range of London’s housing history.

Given the prevalence and continuing and evolving significance of later Victorian and Edwardian speculative housing in the capital – predominantly those terraced homes whose popularity has ebbed and flowed over the years but which now, in London’s overheated housing market, often provide very desirable residences indeed – it’s right and proper that these feature heavily.

The Minet Estate in Lambeth, the ‘miles of silly little dirty houses’ (as they were described by Eric Gill) in south Battersea, gentrified Canonbury, each get informative and detailed coverage as exemplars, both representative and distinctive, of their type.  A later chapter on the ‘sustainable retrofit’ of Victorian houses is highly relevant to contemporary concerns – of high-minded environmentalism at best and middle-class doing-up more cynically.

I’m off-piste here – this is a blog about council housing and we’ll come to that later – but these chapters are important when there’s an almost universal consensus that we must build more homes and, in particular, more genuinely affordable homes.  Today the top ten building companies control around 47 per cent of the new build market (as late as 1980 there were over 10,000 small and medium sized housebuilders; by 2014 that number stood at just 2800) and their primary purpose is to make profits rather than homes.  Together the top ten own sufficient land on which to build well over 600,000 homes but landbanking, restricted supply and higher house prices suit their margins better. (1)

In Lambeth, the land-owning Minet family promoted large-scale construction by a number of smaller building enterprises.  Design and quality were overseen by their active surveyor; contractor profits were realised by a leasehold arrangement enabling builders to pay a manageable annual ground rent which cut out the capital costs of land purchase.  At a time when inflated land values and corporate capitalism both in their different ways conspire to reduce housing supply, perhaps this is something, as David Kroll suggests, we can learn from. 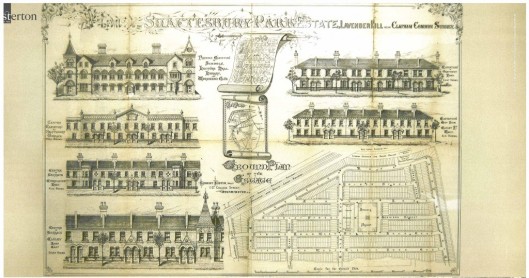 A plan of the Shaftesbury Park Estate, Battersea, built by the Artizans, Labourers and General Dwelling Company from 1872

Colin Thom’s contribution on Battersea makes a similar point about the role of small builders whilst arguing, in the present-day, that local government and the social housing sector should play a more interventionist role in ensuring that rehabilitated terraced housing remains affordable to other than the well-heeled middle-class who dominate this sector of the London housing market.  The general argument that such housing now provides a popular and adaptable housing form is now widely accepted.

Peter Guillery’s chapter on South Acton (he also provides a useful Historical Overview of housebuilding trends and housing fashions since 1850) reminds us this wasn’t always the perception.  South Acton was a rather isolated and largely working-class community; by the 1890s, its 200 laundries had earned it the soubriquet ‘Soapsud Island’.  By the interwar period and with the later assistance of Hitler’s bombs, the need for the replacement of these terraces – at first piecemeal and then by large-scale redevelopment – became pressing though some questioned the loss of community which might result.

Guillery takes us expertly through the various phases of the area’s public housing history: mixed development to high-rise to the problems and backlash which followed to the comprehensive regeneration of recent years – from a broadly ‘liberal and democratising capitalism’ through post-war socialism to present-day neoliberalism. It’s an empathetic account which understands the unintended consequences of well-meant actions.  Several tower blocks have been demolished; the most recent masterplan envisages the ‘complete replacement of post-war housing’ with the new low-rise, high-density, mixed-tenure developments now preferred.

That might send alarm bells ringing as we look at how similar plans have already affected or threaten to impact the homes of established communities across the capital.  Simon Pepper provides a useful outline of how and why high-rise developments took off in London from the 1960s and why that trend reversed.  The collapse of Ronan Point in May 1968 offers only a partial explanation.

Ernő Goldfinger’s Balfron Tower, Grade II listed in 1996, survives and it won’t be demolished but it is being sold off to the private sector and its social housing residents evicted.  David Roberts campaigned to have this social housing heritage honoured, not as ‘exemplar’ but as the essential element of its future use.  Sadly, as he would be the first to acknowledge, Historic England’s Grade II* listing of the building in 2015, made only a token reference to Balfron’s social purpose.

Roberts’s excellent chapter also invites us to re-think how we approach such buildings.  Residents’ participation was central to his campaign, a belated contribution coming long after the media and architectural academics had pronounced their own judgments, positive and negative.  He reminds us too how freighted the term ‘failure’ is and how readily it rests (or is rebutted) on perceptions narrowly grounded in aesthetics or intent rather than lived experience.

Broadwater Farm, Tottenham – allegedly one of the ‘sink estates’ targeted by David Cameron.  Its residents are fighting back against plans to demolish and redevelop parts of the estate.

Issues of perception and labelling are also central, once you get through its rather abstruse academic style, to Ben Campkin’s contribution on ‘sink estates’.  He examines how the label, once applied sociologically to estates in decline, morphed into something cruder and pejorative and how it became the political pretext for an attack on those estates and their communities.  He points too to how resistance from these communities can be rooted in part in the very marginalisation and insult they have suffered.

The new extension to the estate

There’s plenty more.  Irina Davidovici’s article gamely seeks to rescue the reputation of some of the early Peabody Estates, widely condemned by housing reformers as well as the working class for their austere ‘barracks-like’ appearance. She suggests that recent Peabody buildings and refurbishments do offer a viable and attractive solution to the question of housing density that we are now wrestling with.  Richard Dennis addresses this directly in his chapter on the mansion blocks built mainly but not wholly for the middle class from the 1850s.

It would have been nice to see somewhere a straightforward advocacy of new council housing.  We know the mistakes – many corrected in what turned out to be the swansong of council housing in the 1970s – and we know the traductions, many now being questioned.  There’s no secret that policies which confined council housing to the poorest whilst catastrophically reducing overall stock in the context of an economic maelstrom which robbed so many of decent employment have hurt estate communities.  These are to a far larger extent than we are allowed to think political choices and a brave politics might yet reverse them.

Depending on their politics and professional and personal perspectives, readers will emerge with different take-aways from this volume.  For what it’s worth, mine is how susceptible to changing fashion our views on housing are. One lesson we might draw from the volume overall therefore is that we might be more humble in our judgments and more willing to learn from its best practice.

Mobilising Housing Histories is available now from RIBA Bookshops or from their online store.

3 thoughts on “Mobilising Housing Histories: Learning from London’s Past: a Review”