I’m pleased to share another guest post this week; this by Mike Althorpe, aka the London Ambler. This post, based on one of Mike’s guided walks, traces the fascinating housing history and politics of one of London’s most radical quarters. I’ll be participating, alongside author Owen Hatherley and art historian Rosamund West, in Mike’s next tour of the Fleet on June 3.

Of all of London’s great hidden waterways, none can claim the radicalism of the River Fleet. Weaving a route from Highgate to the Thames it has been both life source and life taker, carving out a landscape that became the epicentre for Victorian speculators and have-a-go railway pioneers, but also a landscape where London’s social campaigners, civic reformers and revolutionary agitators found their voice and their architectural expression.

Farringdon Road and the Metropolitan Railway, 1868

To trace its course today, through modern day Kings Cross, Clerkenwell and Farringdon is to reveal the memories of a set of ideas and episodes in housing and urban form that were to have profound national consequences for the UK.

The upper part of the Fleet was locally called the Bagnigge and it was upon the Bagnigge Marsh or Wash where new ideas in housing were pioneered. The river valley defined rich and poor. Put simply, for most of the 19th century the money held the high ground and those without waded in the marsh sharing cheap rents with a host of ramshackle warehouses, service yards, hospitals and factories.

In 1845, living conditions for the poor in Pentonville were deemed critical enough for the Society for Improving the Condition of the Labouring Classes to step in with one of the earliest philanthropic housing ventures in London. On a narrow strip of land behind Calthorpe Street, they created a ‘Model Street’ of 15 buildings for 23 families in a variety of unit types arranged as two respectable terraces.

The ‘model dwellings’ in Pentonville

In one of them there were 30 rooms designated for widows and single women. It was a major advance, but was panned due to its cramped proportions. Writing at the time of its completion The Builder, an influential trade journal of the day, called it a ‘disgrace’, adding that if they didn’t buck their ideas up:

they will rear a hot-bed for infection, and throw a great impediment in the way of that improvement which they profess to seek.

Learning from the mistakes of the Society, just upstream on Wicklow Street, the Improved Industrial Dwellings Company (IIDC) created one of its most outstanding model tenement schemes, Derby Buildings by their builder architect Matthew Allen in 1865.

The design of the blocks was the outcome of years of refinement loosely based on Henry Robert’s Great Exhibition model dwelling cottages of 1851. At Kings Cross, the IIDC scaled up the idea and gave it a heroic urban form with wrought iron access decks taking pride of place at the street. It was architecture where function and the necessity of plan, creating decent space and good ventilation, led. Many more followed.

The IIDC’s site had been left over by the creation of the Metropolitan Railway who smashed out 50 houses and displaced many local residents in the process. This was a story repeated down the length of the Fleet. The valley was a frenzy of commercial activity. As the railway pushed its way down to Farringdon it laid waste to poor neighbourhoods.

In the 1870s the Metropolitan Board of Works stepped in to make good the destruction, acquiring sites via compulsory purchase and selling them at a discount to private builders who would provide new affordable housing. At the edge of Clerkenwell Green, the Peabody Trust was offered one such site and completed Pear Tree Court, one of its characteristic artisan estates in London stock and Suffolk white brick. Clean and straightforward but, for many critics, monotonous and barracks-like.

Critics also highlighted that Peabody, common with many philanthropic housing ventures at the time, operated a strict tenant policy aimed at ‘the deserving poor’. This basically meant that it rehoused those morally upstanding members of the working class who had got married, had stable jobs and the economic means to exercise some choice in their lives. If you were unmarried, jobless, in casual low-paid work or homeless you wouldn’t qualify. It meant therefore that many in most urgent need of housing continued to suffer and were pushed outwards from the area.

By the 1880s, a number of parliamentary acts had been passed to improve working-class housing but the powers and machinery of local government – particularly in London – were grossly inadequate to the task. At a district level, some 30 local vestries existed, most rate-payer dominated and unwilling to act. The Clerkenwell Vestry, on the east side of the Fleet, however, was an unusually activist body as its new town hall, built in avant-garde arts and crafts style in the 1890s, testified.

In 1900, this became home to Finsbury Metropolitan Borough Council – one of the 28 new boroughs created in a radical reform of London’s lower tier of local government.  Finsbury would maintain its predecessor’s reforming traditions.

The controversial problem of London’s strategic governance had been dealt with earlier. The Metropolitan Board of Works, established in 1855 to oversee sewerage, streets and bridges, had long been criticised as unfit for purpose – undemocratic (it was indirectly elected by the vestries and district boards) and, in part, corrupt. The establishment, in 1889, of the London County Council (LCC) transformed this picture and its vision and drive was early manifested in the valley of the Fleet where the new municipal government inherited the Rosebery Avenue urban improvement scheme from its predecessor and expanded and completed it in grand style.

Straddling the Fleet Valley by means of a hidden viaduct between Clerkenwell and Holborn and engineered by the Edward Bazalgette (son of Joseph of the engineering dynasty), Rosebery Avenue was a new type of joined up urban improvement. It provided not only improved communication across the river valley, but land for housing, for business, civic infrastructure and amenities, tramways, public toilets, gardens and fire station. Clerkenwell Vestry’s new town hall at its northerly end was recognition of this transformation.

At the turn of the twentieth century where once Georgian slums and Dickensian rookeries stood, the LCC could claim this part of the Fleet valley as a piece of model city, a practical monument to social and urban progress which they continued to develop upon. A few years later, on the western side of the valley in Holborn, work started on the Bourne Estate, the third in a new generation of large council housing schemes by the LCC after its celebrated work in Bethnal Green and Millbank.

Elsewhere on the slopes of the Fleet and later in the century, a confident Finsbury Borough Council embraced revolutionary architecture to demonstrate their commitment to social progress, pushing building design further than any other authority in the country had previously dared.

Behind Exmouth Market they completed the Finsbury Health Centre in 1938. Local in purpose, its bold modernist design by Russian émigré architect, Berthold Lubetkin, was ground-breaking and it became a rallying call across the UK for a bold new tomorrow, cementing Finsbury’s reputation as one of the most radical and progressive local authorities in the country and inspiring those campaigning for a National Health Service and an integrated Welfare State.

Lubetkin’s association with the borough of Finbury went deep. In his architecture, the leaders of the council had at last found its radical form. It was bold and it was the future. As the health centre was completed, he turned his attention to housing and began work on designing what became the Spa Green Estate, commissioned in 1938 but completed after the war in 1949. 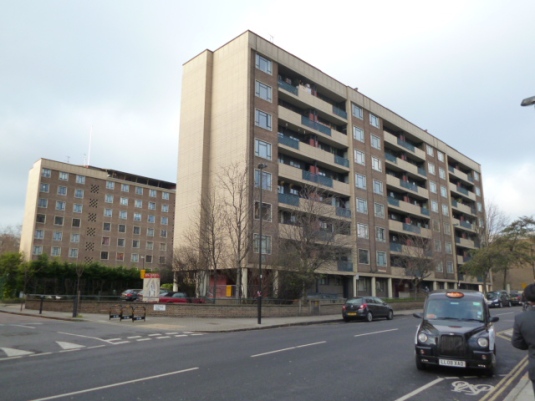 During the post-war years, to the north of the borough and up the hill from Bagnigge Wash and 90 years on from the IIDC blocks on Wicklow Street, Finsbury’s resolve was unshakable. Sweeping away Georgian terraces and squares originally built for the rich, the tiny borough continued to punch well above its weight and created Bevin Court in 1954, Y-shaped block of 112 flats and maisonettes designed again by Lubetkin.

With its gymnastic display of concrete engineering and patterns of alternating balconies and windows, Bevin was inspired by the work of constructivist architects in Russia and it is here that the revolutionary spirit of Finsbury perhaps beats at its strongest with the block marking the site of Lenin’s 1903 London home. It was between here and the secret printing press downstream at Clerkenwell Green that revolution in Russia was forged.

With an election looming a walk through the valley of the Fleet is reminder of London’s own radical inheritance. While some of our most severe urban social problems may now lie elsewhere, it is a landscape loaded with the landmarks of a struggle that in 2017 is as poignant and perhaps as urgent as ever.

There are a few remaining places left for the 3 June walk, A Radical Riverscape: Architecture and Revolution down the Fleet. Click the link if you’d like to book.