We left Broadwater Farm last week, a much improved and increasingly popular estate, but police-community relations were in a state of simmering tension and exploded catastrophically on the night of Sunday 6 August 1985.

One day earlier, police had raided the home of Cynthia Jarrett.  This lay some way off the Estate but her son Floyd – the target of the raid – was a leading member of the Broadwater Farm Youth Association (BWFYA).  Mrs Jarrett died of heart failure. Another black woman, Cherry Groce, had been shot and seriously injured in a similar police raid in Brixton the previous week.  On the Sunday, protestors moving off to what was billed as a peaceful protest outside Tottenham Police Station, found their way blocked – and all other exits barred – by police in full riot gear. The confrontation escalated and, in the seven-hour riot which ensued, PC Keith Blakelock was brutally murdered.

A full-scale state of siege followed.  Four hundred police officers occupied the Estate over the following weeks and some 270 police raids took place over the next six months. Some 159 arrests were made.  In the longer-term, beyond the crude and sensationalist coverage of the tabloids (unsurprising perhaps in such a genuinely shocking event), serious investigation into the causes of the rioting began, most notably in the inquiry, commissioned by Haringey Council, led by Lord Gifford QC.

The overall verdict – supported by the fact that relatively little damage to property or looting occurred – was that: (1)

The riot…was not primarily about poverty, unemployment or bad housing…The protest by the youths was essentially about policing – police activity and police attitudes. 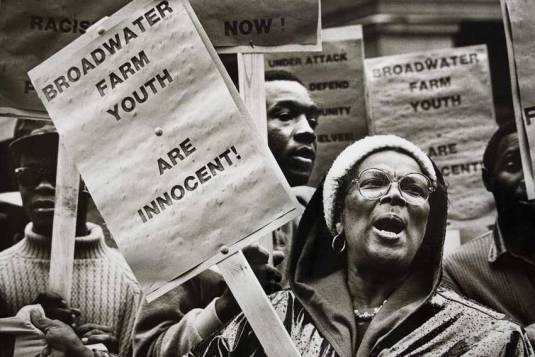 In this sense, the unwise but unfairly misrepresented words of Haringey’s council leader Bernie Grant were accurate:

The youths around here believe the police were to blame for what happened on Sunday and what they got was a bloody good hiding.

In the aftermath, the local community, spearheaded by the BWFYA, and the Council laboured tirelessly – in fact, building on the good work done before the riots – to rescue the Estate from the nightmare which had befallen it.  A £33m grant in 1986 under the Government’s Estate Action programme provided much needed capital.

A large part of that finance went on modifications to what were held to be the design flaws of the original scheme.  A ‘Ground-Level Reinstatement Plan’ removed shops from the deck level of Tangmere to Willan Road and created new lobbies (with concierge services) at surface level for the larger blocks.  The walkways were removed in 1993. 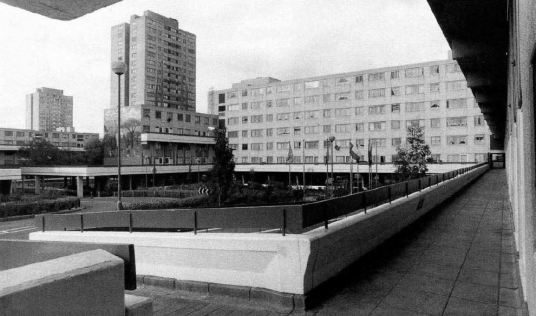 The image from Glendinning and Muthesius, Tower Block, shows Broadwater Farm after refurbishment in 1990. The flagstaffs mark the Remembrance Garden.

There were other improvements too but much of the work improving the environment and ‘feel’ of the Estate was carried out under the aegis of the BWYFA.  A Remembrance Garden (a plaque commemorates ‘those who died and suffered’ in the 1985 riots) and a Nation’s Square celebrating the Estate’s diverse community, were created. (2) 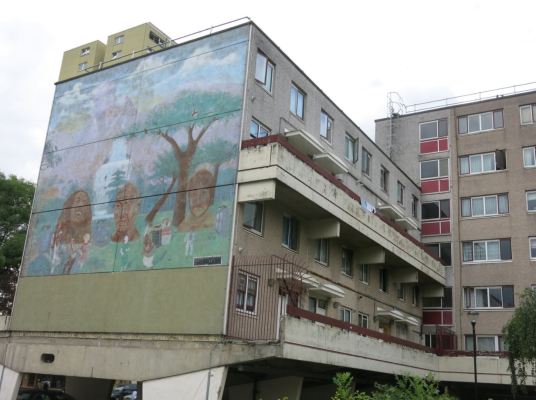 Murals – one on the end of the Rochford block painted by Anthony Steele, a local black youth depicting Martin Luther King, Gandhi, John Lennon and Bob Marley; another on Tangmere by a local Turkish resident with its own symbolic message of peace and harmony – were created to beautify the Estate.  A third – the Waterfall mural on the end of the Debden block painted by Bernette Hall – was added between 1990 and 1991. 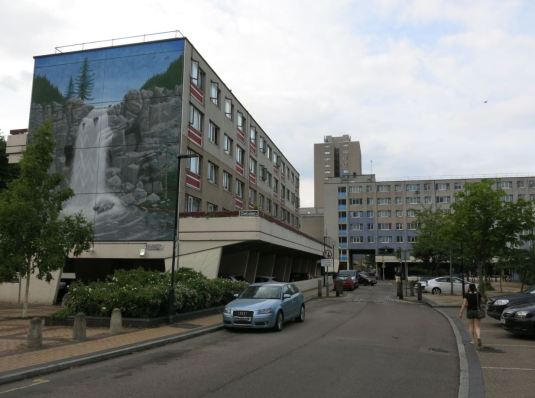 Debden (with Bernette Hall’s Waterfall) and Hawkinge with Kenley to rear. photograph 2016

More tangibly, given a youth unemployment rate of 37 per cent on the Estate (the figure for London as a whole was 12 percent), there were serious attempts to create local jobs. Enterprise workshops and training initiatives, often local co-ops, were set up to provide skills to young people as well as necessary local services.

The effort to employ residents on the ongoing renovation works was aided by the multi-disciplinary, area-based design teams developed by John Murray in the Council’s Building Design Service from 1979 with the support of Jeremy Corbyn, then chair of Haringey’s Planning Committee.  Murray was a founder member of the New Architecture Movement founded in 1975 to democratise the profession and promote cooperative working with ‘users’, those who, too often, were merely the subject of architects’ grand designs.  Murray was elected head of the Building Design Service in 1985 and would go on to become Borough Architect.

On Broadwater Farm, the local team worked closely with Estate residents and employed local labour. Part of the scheme involved appointing two local young people as trainee architects – an important attempt to open up an increasingly closed and elitist profession. At peak, the Building Design Service employed around 200 staff, 60 per cent of whom were black and ethnic minority – figures which reflected the Borough’s rich diversity. (3)

By 2003, the Estate was virtually fully occupied and forty residents had purchased their homes under Right to Buy.  An annual survey found only two per cent of residents felt unsafe in their homes (compared to a Haringey average of 15 per cent) and over half the residents had lived on the Estate for ten years.  It was, by all objective accounts, a stable and safe community.

Christian Wolmar concluded that – beyond the structural changes intended to ‘design out crime’ – much of the improvement lay with the strength of the local community: (4)

the very design of the estate, the fact that the lay-out is so different from the ordinary terraced housing around with a clear line that distinguishes Broadwater Farm from its surrounding area has been helpful in creating a sense of community.

Interestingly, this was a comment echoed in part last year by Victor Olisa, a Haringey police officer: ‘The crime level’s probably lower than other parts of the borough because it’s a contained estate’. (5)

Hawkinge with Kenley to rear. The first floor deck has been transformed into private ‘defensible space’ and a new ground floor entrance provided. Photograph 2016.

This suggests that either those walkways were doing a lot of heavy lifting in the bad old days or that much of what we believe about the Estate depends, not so much on any objective truth – good or bad – but on context, circumstance and perception.

An academic analysis by Dominic Severs makes an interesting comparison between (predominantly outsider and middle-class) attitudes towards the ‘rookeries’, the particularly notorious districts of slum housing of the Victorian era, and the ‘no-go’ estates of the modern era, ‘characteristically high-rise, modernist and “non-street”’.

What they share, he argues, is a defining set of characteristics: (6)

Separation from the mainstream of transit and economic activity; the complexity and ambiguity of constituent spaces; the difficulty of navigation by outsiders; enclosure; covered entrances creating symbolic barriers or markers of ownership; the indirect relationship of street to home; and the complex and potentially illegible relationship between public and private spaces…

It would be absurd to ignore the real problems suffered by Broadwater Farm over the years or gloss over the tragic events of 1985 but it is nonetheless vital to recognise just how much of the obloquy suffered by the Estate – and other similar schemes such as the Pepys Estate in Lewisham or Southwark’s ‘Five Estates’ – rests on their difference and separation, the class prejudices these promote, and the alarmist fears fanned by hostile commentary.

Some of that commentary was revived by the riots of 2011.  On 4 August, Mark Duggan – a young black man raised on Broadwater Farm with a record of criminal activity (though its seriousness was disputed) – was shot and killed by the police.  The death played into continuing tensions between the police and the black community and fed the belief that the latter was unfairly targeted and treated.

In disputed circumstances, on 7 August an initially peaceful protest outside Tottenham Police Station, led from Broadwater Farm but involving many not from the Estate, degenerated into violent disorder, looting and arson on Tottenham High Road.  Comparable events occurred across twelve other areas of the capital and a similar number of towns and cities across England.

This view of Northolt shows that parts of the estate still look poor and rundown. Photograph 2016.

One London study inferred a correlation between the location of rioting and the proximity of ‘large post-war housing estates’; Broadwater Farm, for example, was close to disturbances in Tottenham, Wood Green and the Tottenham Hale retail park to the north. (7)  But broader, national analysis showed an array of causal factors: sheer opportunism was one, the chance of ‘shopping for free’ as looting was described; an inchoate sense of grievance motivated by the disparities of affluence and poverty was another.  What stood out most, however, was a widespread resentment of police behaviour. (8)

Broadwater Farm has a history, a seemingly inescapable one, but – the ‘accident’ of its personal association with the victim of alleged police wrongdoing aside – it seems hard to blame the Estate itself for the riots of 2011 and appropriate to focus on wider societal causes.

This wasn’t the view of David Cameron. (9)

The riots of 2011 didn’t emerge from within terraced streets or low-rise apartment buildings. As spatial analysis of the riots has shown, the rioters came overwhelmingly from these post-war estates.

And accompanying off-the-record briefings suggested that Broadwater Farm was to be one of the ‘sink estates’ to benefit from his razing of the ‘high, brutal high-rise towers and dark alleyways’ which apparently fomented such disorder.

Little of this made sense – its apparent ignorance or wilful disregard of estate regeneration occurring since the eighties, the paltry investment proposed, its evasion of so much more (not least Conservative policies since 1979) which might be blamed for the 2011 riots. As a piece of political grandstanding, it garnered the headlines Cameron presumably wanted but its substance was as evanescent as his own tenure of office.  He was gone six months later and Brexit critic Michael Heseltine, the ‘tsar’ appointed to oversee the proposals, ten months after that.

It’s not perfect – senseless ‘postcode wars’ exist between young people from the Estate and others from neighbouring areas, police-community relations have improved but need work, class and racial inequalities and injustices persist – but it might be thought time to leave the Estate alone.

But Broadwater Farm is threatened – the word seems appropriate in this context – by further regeneration.  Though not directly a part of the Haringey’s controversial Development Vehicle, the Council nevertheless believes that the area ‘presents an opportunity for a large scale regeneration project’ which includes ‘steps to redress tenure imbalances and alter the currently negative perception of the area’. (11)

It’s a now conventional view which sees council estates as ‘improved’ by importing middle-class owner-occupiers and private renters.  As such, of course, it doesn’t challenge ‘negative perceptions’ but reinforces them.

I’ll leave the last word with the Estate’s Residents’ Association: (12)

Broadwater Farm provides decent quality housing for thousands of people. It is a strong, vibrant community. Huge amounts have been spent on providing concierge suites, new roofs and windows, providing a Community Centre and many other facilities. All residents want to look to the future on our estate, rather than having our lives needlessly disrupted by demolitions and decants.

(8) LSE and The Guardian, Reading the Riots: investigating England’s Summer of Disorder (December 2011)