Glyn Robbins, There’s No Place: the American Housing Crisis and What It Means for the UK (Red Roof, 2017)

I’m no expert on US housing – far from it – and before I started reading Glyn Robbins’ new book, I wasn’t sure what relevance American housing struggles and controversies could hold for us in the UK.  Having read this informative, wide-ranging and engaging work, I sadly conclude they are only too relevant.  His core argument – ‘trans-Atlantic housing policy is converging around a pro-business consensus that intensifies housing need and inequality’ – is powerfully justified in the pages which follow.

There are, of course, obvious differences between the US and the UK housing experience. In the US, public housing has never accommodated more than 5 percent of the population; in the UK, at peak in the early 1980s, that figure exceeded one-third. Whereas in the UK, public housing history essentially begins with the 1890 Housing of the Working Classes Act, in the US it starts in 1935 with the aptly-named First Houses on East 3rd Street, New York City.

As Robbins concludes, these first houses have ‘stood the test of time’ – home, for example, to 94 year old Mary Hladek since 1944 and credited by her son Jim as ‘providing a settled, secure environment to grow up in and “make me the person I am”’.  When President Roosevelt’s close adviser Harry Hopkins opened the homes, he declared that ‘private capital never spent a dime to build a house for a poor person’. That judgment seems as plausible now as it did then. 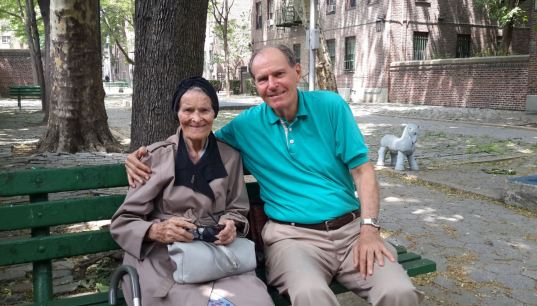 Two years later, as much a New Deal job creation programme as a housing one, the Wagner-Steagall Housing Act set the framework for the creation of public housing authorities in cities across the country. Some 3000 were established; they built around 1.2m homes.

The need to house returning ex-servicemen gave public housing a further boost after the Second World War; a 1949 Housing Act projected 810,000 new homes though, in the event, only 84,000 were built by 1951.  In a decentralised, federal system, there were significant local initiatives too such as New York State’s 1955 Mitchell-Lama programme which provided low-cost public finance for affordable housing and led to the building of 100,000 homes for people on modest incomes.

In overall terms, however, by the 1950s, ‘a far more embedded feature of US housing policy’ had kicked in – the provision of government mortgage subsidies promoting owner occupation.  Between 1940 and 1960 owner occupation in the States rose from 44 percent to 60 percent – a full ten points above comparable figures for the UK.  But where America leads, Britain often follows.

This history is covered by Robbins not merely as history but as a reminder of rival traditions and alternative policies as relevant today as they were in the past.  His book, however, is not a conventional chronological narrative; nor, intentionally, is it an academic tome.  The form is ‘to some extent … a travelogue’, organised around meetings with ‘US housing activists, advocates and experts’ and taking in many of the most important housing schemes and struggles in America. These are mostly – such is the nature of US public housing – in or around the major cities of eastern and western seaboards with Atlanta and New Orleans in the South thrown in for good measure. 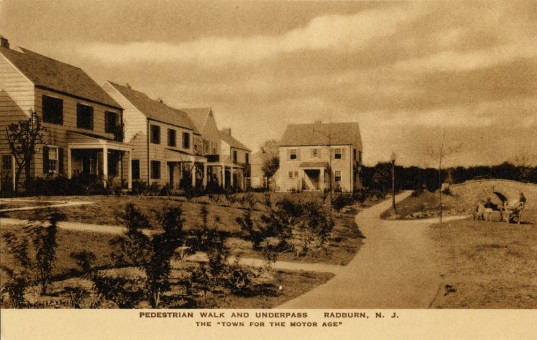 What is lost in overall cohesion by this format is easily offset by breadth and colour.  For a newcomer to the history of US public housing and policy, it offers an accessible introduction to some of the country’s most noteworthy housing schemes. Some will be familiar: Radburn, New Jersey, for example, designed by Clarence Stein in 1929 as ‘a town for the motor age’ and inspired by Ebenezer Howard’s vision of the Garden City. Stein envisaged, in Robbins’ words, ‘a suburban arcadia with communitarian ideals’; the reality was more privatised and less socially diverse than he had hoped.

Van Corlandt Park in the Bronx, New York City, offers another significant case-study. Founded in 1927 by Abraham Kazan and Sidney Hillman of the Amalgamated Clothing Workers Union, it remains a successful and attractive non-profit cooperative of some 2500 homes.  A successor, Rochdale Village (named after Lancashire’s pioneering co-operators), was founded in Queens in 1965 under the Mitchell-Lama programme.

There’s Levittown too – a mass-production, white picket-fence icon of American suburbia, created by William Levitt for returning veterans (the first on Long Island, New York, in 1947) and subsidised by a state-funded mortgage programme.  It’s a potent symbol of America’s inescapably racialised housing and politics that mortgages were granted only to White Americans.

Public housing as such is owned and managed overwhelmingly by those city Housing Authorities founded under Wagner-Steagall.  Robbins visits a range of these – Boston, which still houses around ten percent of the city’s population; New York City, the largest with 178,000 homes (15 percent of the national total) and 400,000 residents; Jersey City (for whom he briefly interned in the 1992); Chicago and so on.  Most are massively in debt; with repairs backlogs to match.  The ‘solutions’ to this crisis – of public-private partnership and ‘mixed income’ redevelopment, rent hikes, speculative private sector development, and so on – will be wearingly familiar to many in the UK.

South Side, Chicago – famous this side of the Atlantic as the childhood home of Michelle Obama and the area her husband worked for three years as a community organiser in the 1980s – offers one, conventionally ‘notorious’, vision of US urban public housing, epitomised in the Robert Taylor Homes, completed in 1962: 4415 dwellings located in 26 gaunt 16-storey blocks stretching two miles along the State Street Corridor.

This, through the ethnic profiling applied, was ‘housing for black people’, as were many other such ‘projects’ (the term generally applied to US public housing estates).  As that community’s traditional economic and social underpinnings declined, it became very troubled.  In 2000, a Plan for Transformation was announced based on the federal Department of Housing and Urban Development’s 1992 HOPE VI (‘Homeownership Opportunities for People Everywhere’) programme.  This aimed at replacing rented public housing with mixed tenure homes.

The last of the Robert Taylor Homes blocks, photographed in 2005. © Kaffeeringe.de and made available through Wikimedia Commons

The last of the Robert Taylor Homes blocks was demolished in 2007.  It’s a measure of the programme’s impact that of 16,500 Chicago Housing Authority (CHA) households tracked in this ‘transformation’, only 56 percent have remained in the CHA system and, of those, some 44 percent are in receipt of housing vouchers placing them in the private rental sector.  Only one in five former CHA tenants were accepted for new mixed income housing.

The book covers a range of similar ‘regeneration’ schemes, such as Columbia Point in Boston and the A Harry Moore scheme in Jersey City alongside campaigns to defend rent controls and secure genuinely affordable homes in major private sector redevelopments across the country.  Most demonstrate similar dynamics and outcomes.

There’s no denying the problems South Side and other similar public housing schemes suffered.  In architectural and design terms, they were sometimes bleak. Even as many cried out for the genuinely affordable and secure homes they offered, they were seen by others as ‘housing of last resort’ and they were home, disproportionately, to those in severe economic or social hardship.

Critics will accuse Robbins of downplaying these problems but he is rightly, in my view, more concerned to challenge the negative stereotypes that dominate conventional wisdom and media portrayals in the US as in the UK.  As he argues:

The Projects or Estates are used to establish a narrative of political justification for their destruction. Clichés depicting ‘disaster’, ‘dependency’ and ‘delinquency’ are trailed through the media and become the stuff of common-sense understandings. A host of so-called experts are summoned to prescribe solutions to problems that are, at most, symptomatic rather than causally related. Invariably the resulting polices are informed by commercial vested interests. They rarely reflect the views of tenants themselves who are seen as incapable of making their own decisions…

He goes on to tackle the ‘mixed income’ goals also unquestioningly adopted by regeneration advocates.  He acknowledges that polarised communities are damaging to their residents – and reminds us of Aneurin Bevan’s own criticism of such ‘castrated communities’ – but he forces us too to re-examine the dynamics of such polarisation and where blame lies: with the politics that has created such division, not, as too frequently and readily assumed, with the poor themselves.

The quest for mixed income neighbourhoods, he suggests (quoting DeFilippis and Fraser) is: (1)

based on the (hegemonic) mantra that low income people are themselves the problem, and that a benevolent gentry needs to colonise their home space in order to create the conditions necessary to help the poor ‘bootstrap’ themselves into a better socioeconomic position.

This is radical, challenging stuff but anyone concerned with housing reform – either in the US or here in the UK – should take these criticisms and the questions they raise seriously.  The claims of ‘state-led gentrification’ and ‘social cleansing’ made by regeneration critics will seem overheated to some but they contain uncomfortable truths.

This returns us to the central thrust of Robbins’ analysis – that there are powerful and troubling convergences within US and UK housing policy.  The author lays these out clearly in his introductory chapter:

US housing protest. Image from Right to the City and Homes for All

If all that sounds depressing the book remains an important handbook for activists fighting for, in the evocative American slogan, a ‘Right to the City’.  Robbins’ portraits of some redoubtable housing campaigners in the US – Mel King in Boston, the late Charlotte Delgado in San Francisco to name but two – are among the most powerful features of the book. His analysis of a vibrant tradition of American housing protest – stronger and more inventive than its UK counterpart in many ways – reminds us that America has more to offer than Trump and the Blackstone Group.

And, if all this sounds too radical, Glyn Robbins concludes with the conservative truism that public housing is not the enemy of owner occupation but its complement in a properly balanced housing market:

The aspiration for private home ownership need not be the enemy of non-market renting, but it will for so long as tenants are portrayed as second-class citizens, thus allowing public spending to be heavily biased in favour of the reputed moral superiority of a mortgage. A truly sustainable, balanced housing policy would recognise that we all need different types of housing at different stages in our lives.

In an era where four times as much US government funding is spent on subsidies to ‘wealthy and middle-class home owners’ and when, in the UK, of £44bn investment in housing to 2020, only £2bn is going to affordable rented social housing, this timely plea to defend working-class communities, their homes and the future of public housing is a powerful and necessary one.

To purchase the book – £10 in the UK $12 in the US – email the publishers at redroofpublishing1@gmail.com. All proceeds, after costs, will go to housing campaigns in the UK and US.

1 thought on “Glyn Robbins, ‘There’s No Place: the American Housing Crisis and What It Means for the UK’ Book Review”