We thought we’d reached paradise.  The bathroom, indoor toilet, central heating, kitchen fitted with an oven, refrigerator and folding table were miracles of luxury. The spacious bedrooms and living room, the integral drawers and cupboards, the huge windows, the large garden and Anderson coal shelter were, to us, more palace than prefab.

Those are the words of Neil Kinnock, describing the South Wales prefab he lived in from the age of six till he went on to university (‘the first Kinnock in a thousand generations to be able to get to university’ if you remember his speech when elected Labour leader) at the age of 18. 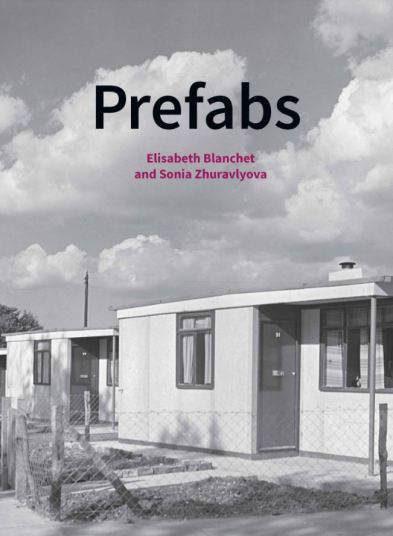 They capture much of the vital story of these prefabricated homes so finely and fully captured in this new book from Historic England. It reminds us these were, predominantly, working-class homes for generations of people moving from the slums. It tells us that, contrary to the cute, folksy image that understandably prevails, these were modern – indeed modernistic – homes, embodying a cutting-edge technology and providing unheralded amenity and convenience for their new residents.

We’re talking here of the post-war prefabs, part of a £150m programme inaugurated by the 1944 Housing (Temporary Accommodation) Act under which some 156,623 prefab homes were erected across the country by 1949.  An appendix provides full details of the range of forms and technology applied. 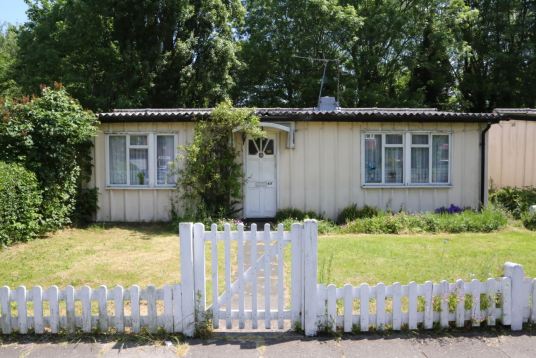 Designed to last around ten years, there were still 67,353 in use in 1964 and in London some 10,000 were occupied into the 1970s. A few survive to the present and some are now listed: six on the Excalibur Estate in south London, 16 on Wake Green Road in Moseley, Birmingham (the latter can be viewed on open days on the 6 and 7 September this year).  Others have been adapted and preserved, notably in Redditch and around Inverness Road in Ipswich where the 142 prefabs form the largest surviving estate of their type. 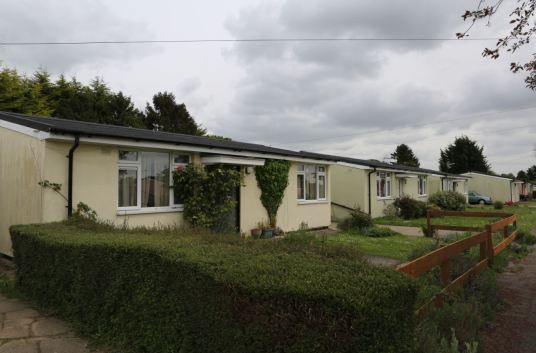 For all that longevity, these post-war prefabs were temporary homes. The wider value of the book lies in its full coverage of prefabricated homes planned as permanent. This longer history and the range of non-traditional forms devised and constructed will surprise many – it surprised me and I like to think of myself as a bit of an expert.

In this, private enterprise has played its part.  Henry Munnings ‘portable colonial cottage’ from 1833 will be new to most; the Sears Roebuck mail order homes in the US are better known with over 100,000 sold between 1908 and 1940.  It’s interesting to learn – and somehow entirely appropriate – that IKEA are currently pioneering a form of emergency flatpack home in conjunction with the United Nations High Commission for Refugees.

But true to form, I’ll focus on the role of the national and local state and here the recurring motif is the desire to meet pressing housing needs as rapidly and economically as possible when traditional brick-built housing was proving both too slow and expensive to build 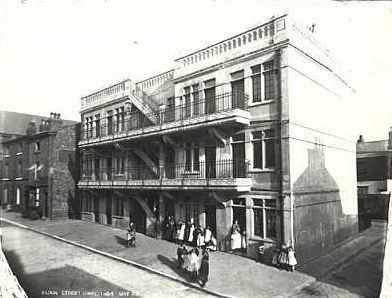 Liverpool City Engineer John Brodie built the prefabricated ‘Labourers’ Concrete Dwellings’ in Eldon Street as early as 1905. A version was featured in the Cheap Cottage Exhibition in Letchworth Garden City the same year and it survives (Grade II* listed) at 158 Wilbury Road.  The exhibition brochure expressed an intent and context which would persist in different forms across the years.  This, it said, was a ‘system of building’:

designed … with the special objective of providing a thoroughly sanitary and economical building, suitable in every way for the housing of the poorest classes displaced owing to the demolition of insanitary areas in Liverpool.

Eleven years later, in the midst of the First World War, Lieutenant Colonel Peter Nissen of the Royal Engineers devised the hut that bore his name. One-hundred thousand Nissen huts were erected to serve military needs by 1918. It’s pleasing that a few were built for peacetime housing purposes in the 1920s, though sadly – as this recent blog post records – not with any great success. 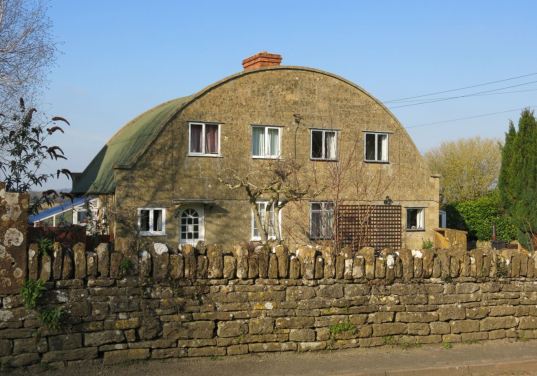 This was part of a broader wave of experimentation in non-traditional construction methods, promoted by the 1919 Housing Act and the newly-established Standardisation and New Methods of Construction Committee. The Committee received 90 proposals of which 75 were approved. The steel-framed Dorlonco homes of the Dorman Long Company, Airey’s Duo-Slab system combining precast and in situ concrete, and Lord Weir’s steel-clad, timber-framed homes were among the more widely built. In total, some 50,000 prefabricated homes had been erected by the end of the 1920s. 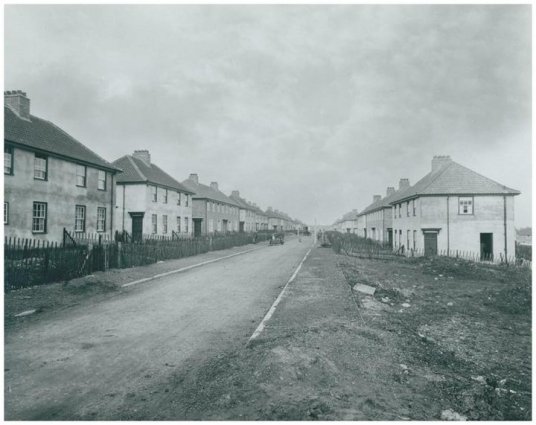 A second world war – and, with it, the same urgent need to provide decent housing for the many who needed it – provided a new impetus to prefabricated housebuilding.  (A 1945 White Paper estimated that 750,000 new homes were required immediately and a further 500,000 to replace existing slums.)  The wartime government anticipated a repeat of the shortages of skilled labour and traditional materials that had hit construction in the early 1920s and set up the Interdepartmental Committee on House Construction (the Burt Committee) in 1943.

To the Architects’ Journal in June 1943, as to many others, there was:

one solution only to the problem of post-war housing. It can be expressed in three words – use the machine

The book again provides an invaluable guide to the range of new prefabricated homes constructed. There were steel-framed BISF (British Iron and Steel Federation) houses, for example, designed by Sir Frederick Gibberd, of which 40,000 were built. 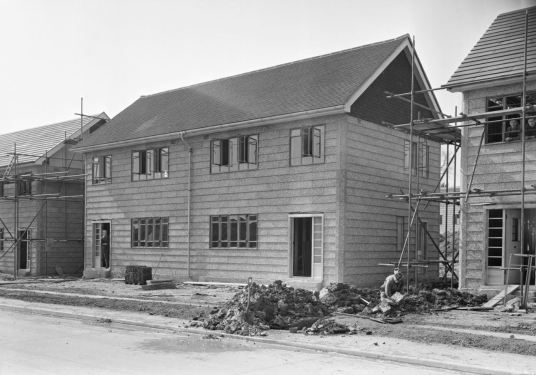 Other designs utilised precast reinforced concrete (PRC).  Here the Wates (60,000 built), Airey (26,000), and Orlit houses (17,000) stand out. The so-called Cornish Units, developed by the English China Clay Company using concrete in which aggregate was a fine sand by-product from their mines, are an interesting variant; around 10,000 were built principally in the south-west. 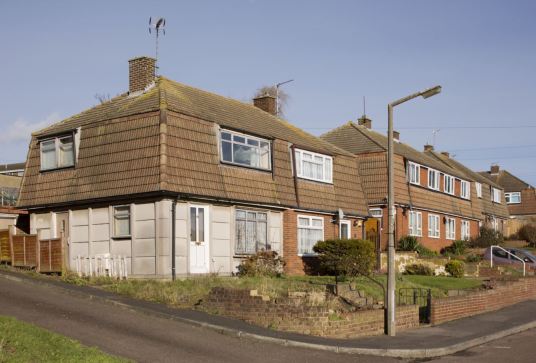 They and the 17,000 aluminium-framed AIROH homes, developed by the Aircraft Industries Research Organisation on Housing illustrate another aspect of the prefabrication drive – the desire to maintain wartime industries in full production in peacetime conditions.  Conversely, some 5000 timber-framed houses – the so-called Swedish houses – were imported in flatpack sections from (you guessed it) Sweden. 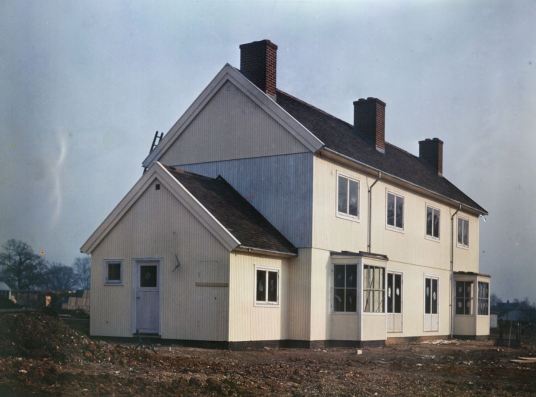 Generally, these homes have stood the test of time though construction and materials flaws emerged in some (nearly all the Orlit homes have been demolished due to a defective concrete mix) and others have required substantial renovation in recent years. Some were disliked due to their unconventional appearance. Generally, cost savings were small if any. Traditional brick-built houses remained more popular and, but for a small spike of prefabricated construction during Macmillan’s housing drive in the 1950s, took centre-stage once more as shortages eased.

This was not, however, the end of ‘the machine’.  An era of mass public housing, rooted in the determination to end slum living forever, took off in the sixties and, in the confident modernity represented by what Harold Wilson had called the ‘white heat’ of the ‘scientific revolution’, system-building emerged as the seemingly obvious solution to the need to build at pace and at scale. 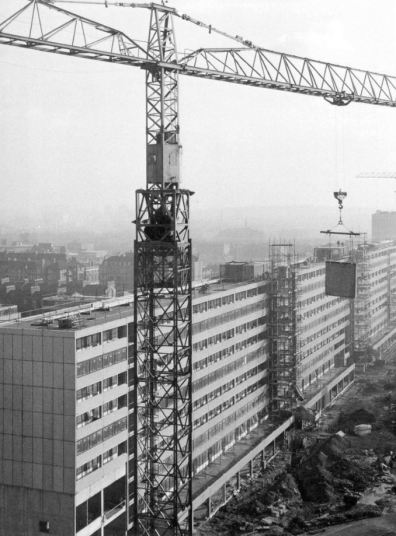 Building the Aylesbury Estate: the LPS method in operation

The Aylesbury Estate in Southwark, currently suffering a slow demolition against residents’ protests, and the Hulme Crescents in Manchester are among the best known, both variants of the very widely employed Large Panel System of construction (LPS).  Due to what was in too many cases very poor build quality and the problems which followed, such estates were rapidly dubbed ‘notorious, none more so than Ronan Point, a Newham LPS tower block which partially collapsed after a small gas explosion in May 1968, killing four.

Ronan Point seemed to mark the end of the apparently hubristic hopes placed in system-building though – suitably modified – system-built schemes continued to be built into the early seventies. A closing chapter of the book, however, tells of a small-scale revival of prefabricated construction in the present housing crisis, both in the UK and globally, and suggests – lessons learned, rigorous standards ensured – that prefabrication remains a plausible and perhaps necessary means of building the affordable homes many millions need. 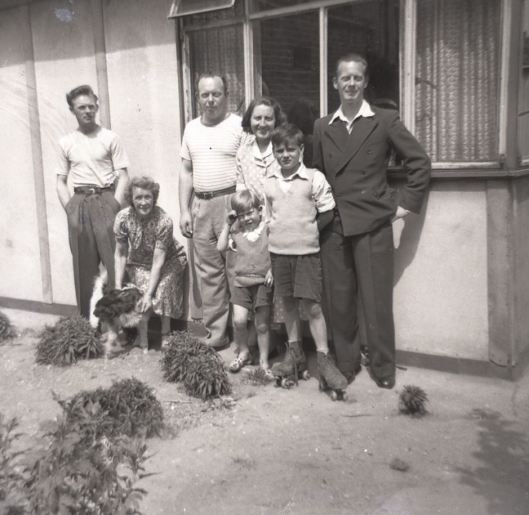 Catherine Bazell’s family in front of their prefab in North London, 1950s © The Prefab Museum

This brief summary – focusing as it does on numbers and forms – might suggest a dry history but a huge quality of Elisabeth Blanchet and Sonia Zhuravlyova’s work is its focus on the lived experience of those that have lived – and continue to live – in prefab homes over the years.  This is a rich social history, full of colour and detail, beautifully illustrated, replete with resident memories and testimonies – a powerful and humane telling of a story in which technology was mobilised to serve human need and societal necessity. 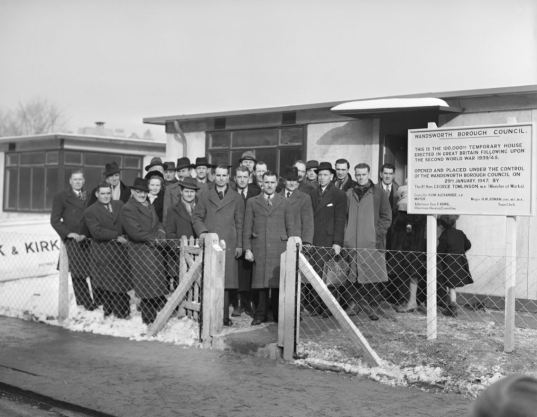 A ceremony marking the completion of the 100,000th, Wandsworth, 1947 © Historic England

Though the authors’ closing words take us back to those seemingly quaint post-war prefabs, they might stand for the broader enterprise this fine book describes:

Although modest to the modern eye and by no means perfect, these temporary prefabs really did change people’s lives by giving them the opportunity to be masters of their very own detached homes – their ‘little castles’. The tenants considered themselves lucky, and the prefabs were a testament to the will to make life better for people after the trials of the Second World War.

You can sample the book via this link. You’ll find publication and purchase details here.

The Prefab Museum is an online archive containing further information, images and testimonies illustrating the history of the temporary post-war prefabs and an interactive map of their past and present locations.