At times, Thamesmead must have seemed less like the ‘Town of Tomorrow’ than the ‘Land that Time Forgot’.  It’s been a chequered story to say the least and it’s one that’s lent itself easily to the usual tropes of planner overreach and misplaced architectural ambition. But Thamesmead, in its latest iteration since 2014 under the stewardship of Peabody, lives on. Perhaps, with Crossrail looming and a DLR connection mooted, some of those earlier promises will be more fully fulfilled though typically, as is now the way, in less visionary form. 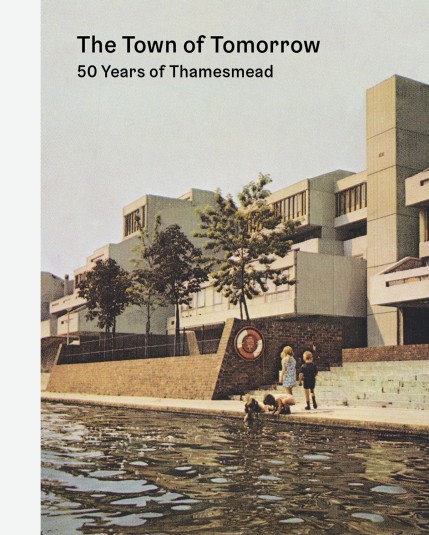 So it’s time to celebrate Thamesmead and we’re fortunate to have a newly published book which does that in a positive though clear-eyed way. The Town of Tomorrow: 50 Years of Thamesmead is, above all, a superb pictorial record of its past and present – of the ideals and plans which formed it, the buildings and landscapes which shaped it, and the people who have lived it.

John Grindrod’s introduction lays out the broad outline of its history with typical panache.  The eyes of the London County Council first looked eastwards towards the Erith Marshes in the early 1960s after their ambitious plans for a New Town at Hook in rural Hampshire were thwarted. Ted Hollamby’s vision of a series of ‘platform villages’ was abandoned as too costly and impracticable but the new Greater London Council (GLC) formed in 1965, seeking to fulfil its strategic housing mandate and aided by Government plans to redevelop abandoned Ministry of Defence land such as the Woolwich Arsenal site, returned to the concept. 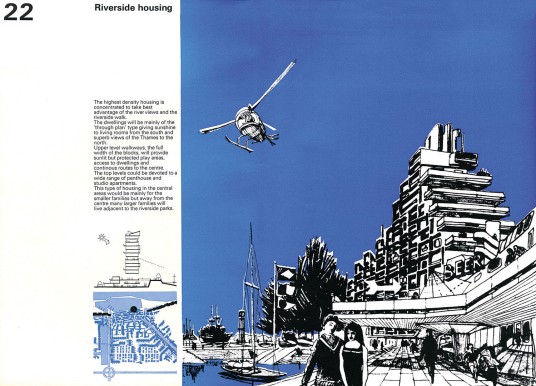 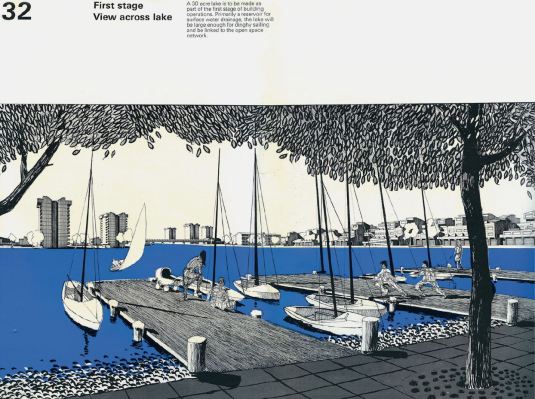 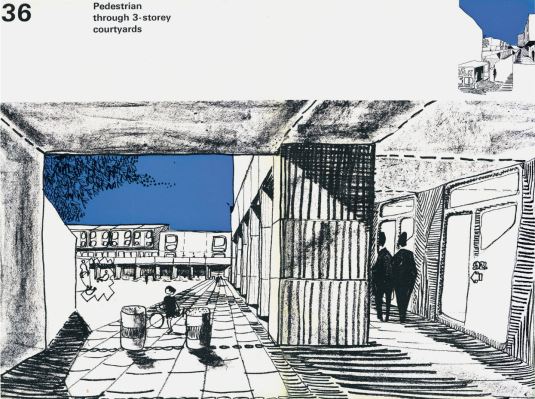 ‘Woolwich-Erith: a Riverside Project’ was born in 1966 – a plan, in conjunction with the Boroughs of Greenwich and Bexley, to create a new town of some 60,000 people on 1300 acres of largely unused land lying on the southern back of the Thames.  Water was one of its defining features – Robert Rigg, the GLC planner, had been influenced by Scandinavian schemes built around the presence of water and how, in Grindrod’s words, that ‘helped create an atmosphere of calm and wellbeing’. 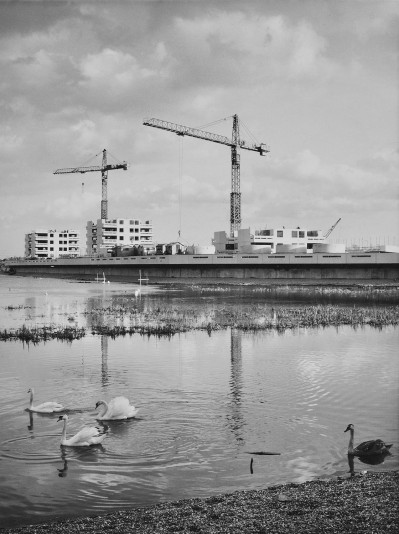 More practically, the risk of flooding demanded unusual means to keep people safe and dry – towers raised on stilts, deck-access homes and high-level walkways dotted around the artificial lakes which would ensure proper drainage. But the conceptual genius of the scheme was to make virtue of necessity. If separation of cars and people was a contemporary planning mantra, there was in Thamesmead, as Grindrod describes:

a more Venetian approach, with bridges and paths floating above what might at any moment become canals and overspill from the river.

The architects’ impressions featured in the book capture a ‘Cool Britannia’ in its first, sixties’, iteration and with a heavily Continental slant:

It was pure south of France, white concrete buildings shining in the warm blue waters, reflected alongside yachts, bikinis and polo necks.  The ambition for Thamesmead would bring the lifestyle of the European jetset – the kind of world portrayed in art house movies and racy novels – and combine it with the more functional aims of creating much needed council housing.

The prosaic minutes of the GLC’s Thamesmead Committee in 1967 record the latter – the ‘central objective of the development [was] to provide housing, and in so doing, create a reservoir of housing for decanting population from the hard-pressed inner area’ in an era when slum clearance was in full spate.

The long spinal terraced ziggurats of Coralline Walk and Binsey Walk and adjacent thirteen-storey tower blocks were the first fruits of this approach; system-built and ‘as modular and groovy as any Habitat stackable moulded plastic furniture of the day’. 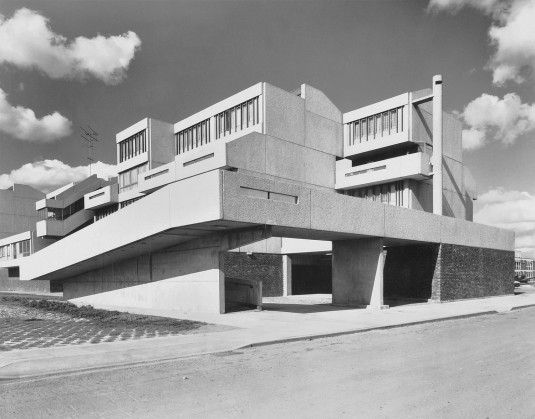 The first residents, Joan and Terence Gooch and their two children, moved into 64 Coralline Walk in July 1968 – the sole residents for six months at a time when the new ‘stark white modernist homes were marooned in a wasteland of mud, puddles, concrete and construction equipment’. 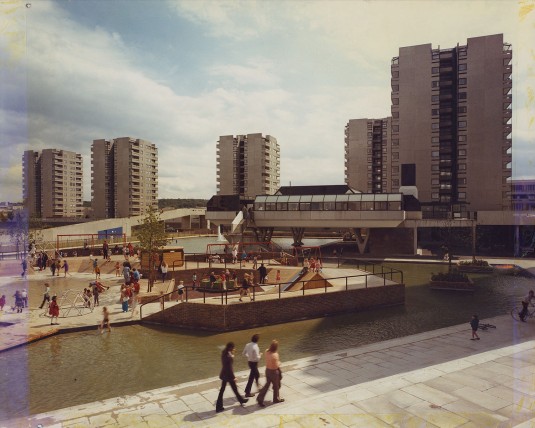 The first school opened in 1968. The health centre – a wonderful modernist building built at Tavy Bridge over one of the artificial lakes and sadly demolished in 2008 – opened in 1970; the first shops amazingly not till 1971.  By 1974, the population stood at around 12,000. 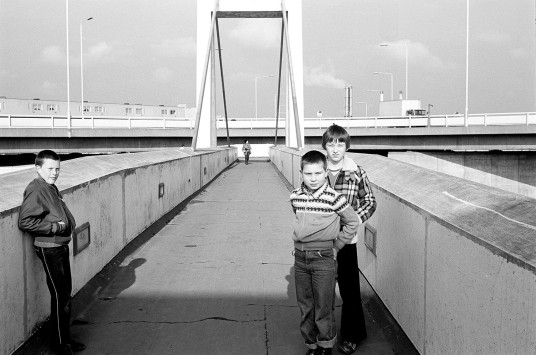 Philip Samuel – one of a number of residents who tell of their own experience in the book – moved to Thamesmead in 1975 with his family at the age of eight:

We lived on Maran Way. I could ride my bike for miles without ever touching the ground. I felt like I was in a Judge Dredd futuristic paradise. It was a good place to be a kid. There was so much nature and wide-open space. In the spring, there would be grass fights, in the summer there’d be water fights, autumn would be mud bombs and winter would be snow balls. 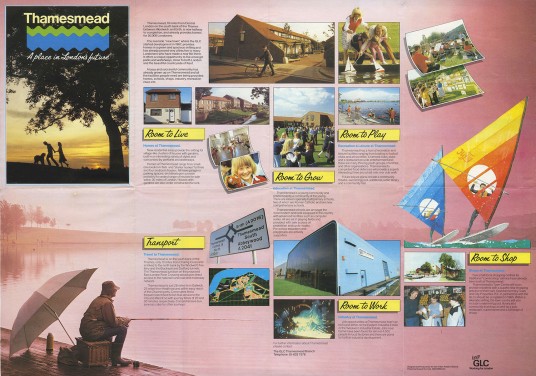 Salianne Heaton, who arrived the following year, has similar memories:

Thamesmead was like a giant playground. You never had to cross any roads, everywhere had flyovers. We used to play knock and run in the squares in the middle of the housing estate.

Generally, looking back as adults, people remember a close-knit community – as Robert Dyer recalls ‘everybody knew everybody back then so, if you did anything bad, someone would tell your mum’.

Of course, nostalgia and selection plays its own part in these perhaps unusually affectionate remembrances but it’s vitally important to allow people to tell their own stories which, all too often are at odds with dominant media narratives. 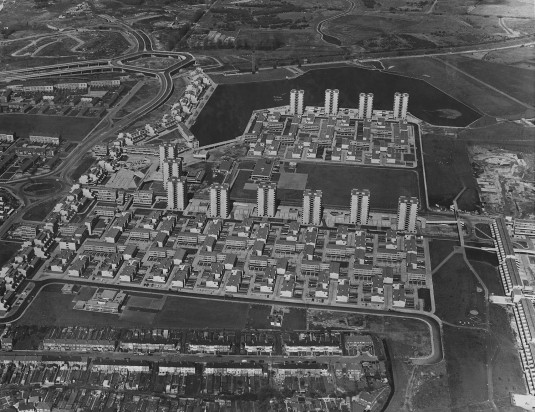 One unwitting element in the latter was Stanley Kubrick’s filming of Clockwork Orange in Thamesmead in 1971. Grindrod points out that Kubrick had intended its ‘formal beauty, lakes and crisp white architecture’ to serve as counterpoint to the film’s scenes of sudden violence, making them ‘even more shocking and incongruous’.  In practice, it was the myth of Thamesmead as some kind of futuristic dystopia which became dominant. (1)

Still, there’s no doubt there were real hardships and difficulties for these early pioneers. The great failing, apart from that slow development of infrastructure which is all too common in major schemes, was the failure to provide the new township with the quick and efficient transport links its population required.

And then it was failed by a changed politics and faltering ambition. Thamesmead’s projected population was downgraded from 60,000 to 45,000; by the end of the 1970s no more than 400 new homes were being completed annually and by 1982, the population stood at 20,000, around half the initially projected figure. 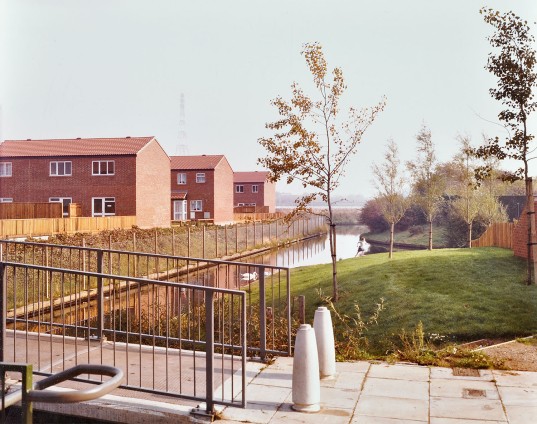 Manordene Road, off Crossway, Area 5, looking north-east along the waterway that runs from Moat Gardens to Tump 39 and the Thamesmead Ecology Study Area, 1982
© London Metropolitan Archives

System-building and modernist design were abandoned and conventional brick build – admittedly the new vernacular was often more to popular taste – became pre-eminent. This also, no doubt, sat more comfortably with a desire to promote ‘mixed communities’ and owner occupation – a 40 percent target was set for the latter in 1978 and 96 tenants had bought their formerly council-rented homes by 1979, well before Margaret Thatcher’s implantation of Right to Buy.  (At present, around 40 percent of homes are social rented.)

The aesthetic shift was facilitated by the raising of the Thames riverbank in 1974 which alleviated flood risks and enabled ground floor construction but it spoke more broadly to a loss of the more audacious hopes which had initially inspired the project. 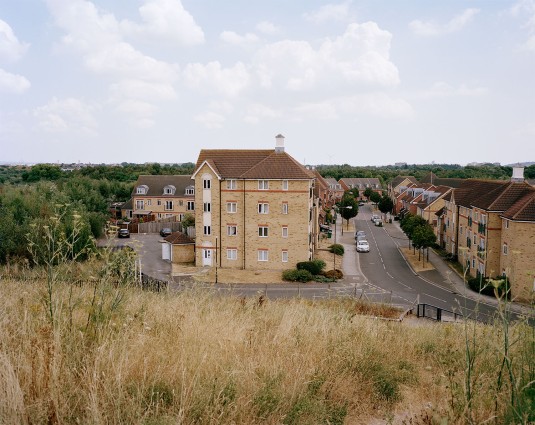 Thatcher’s politically-motivated abolition of the GLC in 1986 seemed merely confirmation of the retreat of social democracy. Thamesmead Town Ltd, a not-for-profit private company, took over the project from the GLC until it split in the later 1990s into three components – the Gallions Housing Association managing housing stock, Trust Thamesmead supporting community development, and Tilfen Land, a commercial property developer.

The demolition of some of the original town’s signature landmarks (including the health centre) and the unimaginative replacements and newbuild which followed resulted, according to a typically caustic Owen Hatherley, in a ‘straggling half-demolished mess of crap spec housing, wasteland and forlorn Brutalist fragments’. (2) 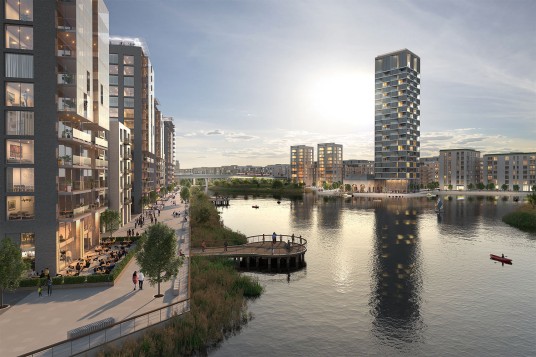 Now, since all three of those bodies were absorbed by Peabody in January 2014, a new and more exciting vision is being proclaimed once more: ‘20,000 new homes, thousands of new jobs, plus new leisure, cultural and commercial facilities’ alongside ‘immediate improvements needed in areas such as pedestrian routes, play facilities, lighting and local amenities’. Ultimately, Peabody say, ‘our plan for Thamesmead is simple – to create an amazing place that people love to work in, to visit, and of course, call home.’ (3)

Well, you can’t argue with that, can you?  It will, however, be important to see how the promised mix of ‘affordable’ (80 percent market rate) and genuinely affordable social rented homes works out and here we may be less optimistic. 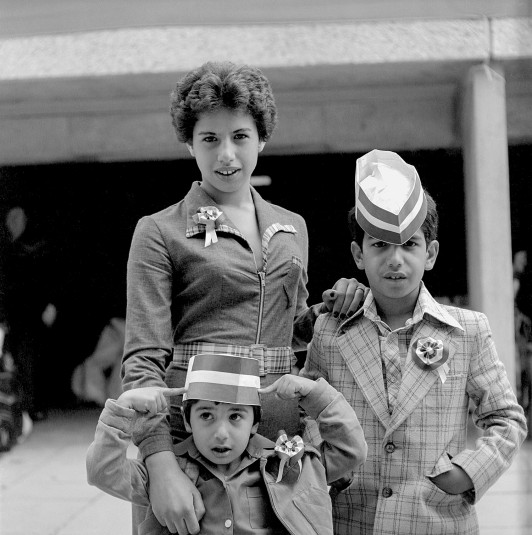 Sheniz Bayraktar (née Mehmet) with her brothers at a celebration of The Queen’s Silver Jubilee in South Thamesmead, 1977
Photography © George Plemper

The book, edited by Peter Chadwick and Ben Weaver with contemporary photography and interviews by Tara Darby, is a great introduction to Thamesmead, and John Grindrod provides a sensitive and eloquent account of its planning and architectural evolution. It’s good to see residents’ memories and experiences also featured strongly. For many people, the 193 colour and black and white illustrations (I’ve included a small representative selection of these in this post), which tell so much of its story so powerfully, will suffice to capture both the bold vision of its inception and more troubled maturity.

Further information on the book and purchase details are available here on the Here Press website.

(1) The article by Inez de Coo for Failed Architecture, ‘Ultraviolence in Representation: The Enduring Myth of the Thamesmead Estate’, offers an excellent account of how Kubrick’s film and later depictions have adversely shaped attitudes towards Thamesmead.

(2) Owen Hatherley, ‘Don’t repeat the mistakes of the past at Thamesmead’, Architects’ Journal, 8 April 2015 (subscription required)

(3) Quoted from the Thamesmead Now website, Thamesmead: the Plan.