I’m very pleased to feature another guest post from Andrew Parnell who wrote an earlier post on Charles Dickens House in Bethnal Green. Andrew is a walking tour guide with Footprints of London and East London on Foot who leads walks on architecture and housing history in Tower Hamlets. These include walks in Bethnal Green which take in buildings designed by ECP Monson. More information and tickets for Andrew’s walks can be obtained from the Footprints of London website.

The architect Edward Charles Philip Monson (1872-1941) designed over 25 London housing estates in the first half of the twentieth century. He worked in private practice but dedicated his life to public building, the overwhelming majority of it housing. In a period when housing provision for the less-well-off grew from its 19th century philanthropic beginnings to the inter-war surge in local authority building, he worked for a variety of housebuilding bodies which reflect that progression. 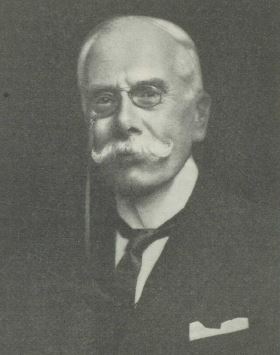 Monson remains relatively unsung in architectural circles, his work overshadowed by that of more celebrated, sometimes flamboyant, figures who came to prominence later in the century. His practice – in partnership with his brother Harry and son John – has been described as ‘capable, prolific but perhaps rather stolid.’ That may be true, but his work can also be seen as highly accomplished, adapting stylistically to changing trends and tastes whilst placing residents’ needs – practical and psychological – before architectural display.

After starting off professionally working in the practice of his architect father, Monson set up in his own right in 1904. Among his early commissions were several of the early estates built by the William Sutton Trust, a philanthropic body founded in 1900 with a huge monetary endowment by a wealthy benefactor. It joined a group of similar housing bodies formed by wealthy individuals in the mould of the Peabody Trust which had been operating since the mid-19th century. The estates Monson designed were ‘grand and impressive places,’ in a relatively mellow, decorated style which distinguished the Sutton Trust’s work from that of the other philanthropic bodies which were variously criticised as ‘barrack-like’, ‘cliff-like’ and ‘prison-like.’ At the Sutton Estate in Chelsea, completed in 1913, for example, he used rustication, stone wreaths, swags and Corinthian colonnades to add ‘liveliness’ to the massive five-storey blocks. According to one resident, ‘the pointing [of the estate] was said to be so perfect that people used to come specially to see it.’ 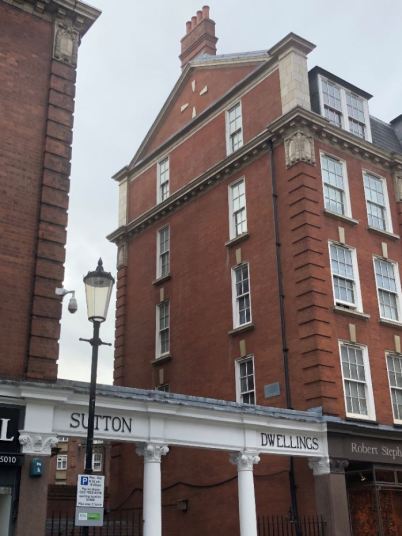 An attempt by the current owner to demolish most of the century-old Chelsea estate’s buildings was fended off by residents and others in 2018 on the basis not only of their architectural but also of their historical significance as early examples of large-scale social housing. That case brought to light another, much earlier conflict which arose around the time the estate was built between the Sutton Trust and the London County Council (LCC) which was then the ‘new kid on the block’ in the housebuilding world. The LCC criticised what it saw as the low level of spending, and the consequent basicness of the accommodation, created by the Trust which was operating under the financial constraints of a ‘no-profit’ approach. The fledgling local authority had levelled this criticism at the work of other philanthropic bodies – which it saw as competitors – and it was referred to in the recent case by the would-be demolishers to question the merits of the estate’s design. 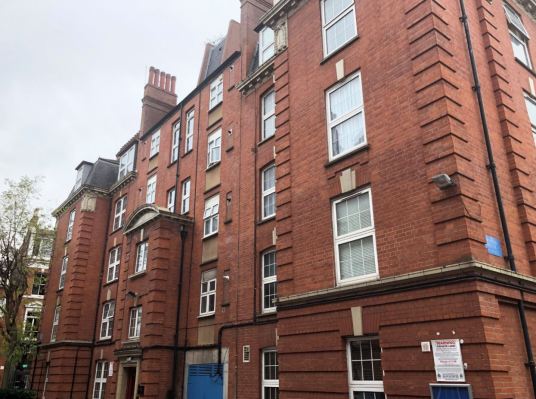 The argument failed when the context of the tension between the LCC and the philanthropic bodies was taken into account. The housing Monson designed for the Trust may have been very simple but it was intended to be affordable: by keeping building costs down, rents could be kept down. Ironically, the LCC in its first great housing project – the Boundary Estate in Bethnal Green – found itself obliged by financial pressures to charge high rents to recover its relatively lavish expenditure on building the estate with the result that the new buildings were occupied not by residents of the slums they replaced but by more affluent tenants. The Chelsea Sutton Estate, whatever its limitations, continues to provide 383 badly-needed social housing units (compared with 237 which the proposed redevelopment would have included).

After World War I, the rate of house-building by London’s Metropolitan Boroughs increased substantially, boosted by the introduction of housing subsidies and other measures contained in the Housing Act 1919. Monson attached himself to the Metropolitan Boroughs in two areas: Bethnal Green and nearby Stepney, both later absorbed into the London Borough of Tower Hamlets, in London’s East End; and Finsbury and next-door Islington, which later merged to become the single London Borough of Islington, in North London. He would go on to design a stream of estates for these councils in the 1920s and 30s.

One of Monson’s early projects for Bethnal Green, which was known as the Parmiter Estate during construction, gave rise to an amusing controversy when, as it was nearing completion in 1927, the left-wing (part-Communist) council voted to call it the Lenin Estate.

At the Parmiter Estate, Monson’s style had moved on from the gigantic blocks of the philanthropic period to a version of the neo-Georgian style widely used by the LCC and other local authorities by that time: simple, orderly and well-proportioned with windows taller than they are wide. However, at Parmiter Monson added decorative flourishes, such as venetian windows in the gables, which were uncharacteristic of this ‘house style.’ This may have reflected the Bethnal Green council’s desire to make a splash with the first estate to be designed by its ‘own’ architect. A splash it certainly made, with right-wing newspapers expressing outrage at the extravagance of ‘luxury’ flats built with public money by a left-wing council.

In fact, during his career Monson adopted, or showed touches, of a variety of styles, reflecting latest trends, but sometimes seeming to jump back and forth across time, perhaps reflecting his clients’ preferences, or what they thought residents would prefer, or his own perception of what would be appropriate. As well as Neo-Georgian, the labels Queen Anne (itself a sort of potpourri of past styles), Arts and Crafts, Edwardian Renaissance/Baroque, Art Deco and Modernist have been used in relation to his various works.

For example, later in Bethnal Green he produced the Delta Estate (1936-7), a gem of a building which, with elegant curved-ended balconies and semi-circular concrete door canopies, discreetly adopts elements of the Art Deco-influenced style, used by other local boroughs in the 1930s, which they sometimes called ‘Moderne’ (everything sounds better in French!). Delta has what the architectural bible Pevsner calls ‘jazzy Expressionist brickwork’ over the doorways.

Brickwork and balconies on the Delta Estate, Bethnal Green

Lively brickwork can also be seen in another of Monson’s Bethnal Green projects, the Digby and Butler Estates (1936 and 1938), which, like the Delta Estate, have the wide windows (wider than they are tall) characteristic of the 1930s.

However, another of his Bethnal Green works of the 1930s, Claredale House (1931-32), has windows which would look more at home in the old neo-Georgian style and even features a high brick archway entrance which seems to hark right back to the huge, stern archways found in some philanthropic blocks of earlier decades.

Arches at the Sutton and Claredale Estates

In Bethnal Green and the other boroughs he was associated with, Monson worked for some radical councils implementing a huge social programme of public housebuilding. But from the limited information we have, it is hard to imagine he was a socialist firebrand. His photo shows him with big moustache, pince-nez spectacles and wing collar, looking every inch the Edwardian bank manager or solicitor. His curriculum vitae lists memberships of just about every relevant professional body, to many of which he devoted copious amounts of time voluntarily in committee and executive work, including as President of the Institute of Structural Engineers. A keen and senior member of the Territorial Army, he was also, as his father had been, a prominent Freemason.

Whatever we may think of these associations, it should not detract from the fact that his professional life was overwhelmingly focused on what contemporaries referred to as ‘the Housing of the Working Classes.’ The output of estates by his small firm would have done credit to the whole architects’ department of a local authority.

Islington was the area where Monson was most prolific. His work there shows a variation and progression of styles, as in the East End. But there is one estate which, for me, represents an epitome or culmination of Monson’s work. The Brecknock Road Estate (1938-9) was recently added to Islington’s Local List of Historical Assets. It was nominated as being:

an evocative example of a thoughtful and proudly municipal conception of modern architecture.

By this late stage of his life and career, Monson had visited Europe and seen how some designers of mass housing there (for example in the Weimar Republic and ‘Red Vienna’) were adopting a modernist approach. At Brecknock Road, Monson used this style, but in a characteristically restrained manner. By this time, he may well have been working with his brother and son who continued the practice under his name after his death.

Modernism at Brecknock Road can be seen in the rectangular balconies which now have 90 degree corners (no curves) and in corner windows at 90 and 135 degree angles in the two-faceted and three-faceted bay windows. The horizontality of long balconies and rows of windows is cut through by the vertical lines created by the bay windows and rubbish chute ‘chimneys.’ But this modernism is tailored to its context. The estate – comprising 225 flats in 16 perimeter blocks around two internal courtyards – makes a virtue of the sloping topography and irregular shape of the site. The blocks have stepped rooflines and their arrangement is not entirely symmetrical, so they occupy the space ‘in a relaxed way.’ The slate roofs are not flat – as strict modernism would dictate – but slightly pitched to match the Victorian roofs of surrounding streets. Between the blocks are glimpses into the attractively planted sloping courtyards. The outward-facing sides of the blocks are predominantly red brick punctuated by the white rendered balconies. The inward-facing sides are predominantly white and pale green, producing a light, airy feel.

Altogether this creates an environment in which you feel that people can live comfortably. One resident and (art) critic has written that the blocks are not monolithic but each ‘is a knowable community,’ and the lack of grand and large-scale effects mean residents can ‘feel more entitled to be there.’ It has a ‘sense of refuge and quiet.’ For an architect of social housing, those comments, coming from a resident of one of his estates, could be seen as the highest praise, an accolade as satisfying as a Grade I listing.

Monson’s work now stands in the shade – physical and critical – of that of more radical individuals with perhaps greater socialist credentials such as Denys Lasdun (whose Keeling House of 1957 in Bethnal Green towers over Monson’s Claredale House across the road) and the emigres from eastern Europe Berthold Lubetkin and Ernő Goldfinger. But Monson’s comparatively quiet, gentle and sensitive approach, expertly using changing styles but without letting any design imperative stand before the wellbeing and contentment of residents, could be said to have produced housing that has stood the test of time and fulfilled its primary function at least as well.

Letter from The Victorian Society to The Planning Inspectorate re: William Sutton Estate, Cale Street and Ixworth Place, London, 28 March 2018

9 thoughts on “ECP Monson: A Thoughtful and Proudly Municipal Architect”