In last week’s post, we saw how Shrewsbury Borough Council had built homes even before 1914 and had built on a large scale after 1918. A second world war created new needs and ambitions in its aftermath. In fact, the Borough emerged from war largely unscathed – just two bombs fell on the town – but its population and significance as a manufacturing centre had grown and it faced the same housing crisis affecting most of the nation.

The local responses – driven in any case by national policy and direction – were similar too. This was seen firstly in the temporary prefab bungalows erected in the town, part of 156,623 nationwide – 50 at Harlescott (some for essential workers in the nearby Sentinel Waggon Works), 55 in Abbots Gardens, 30 in New Park Close and a smaller group for elderly people in the Old Heath Estate. (1)

Permanent prefabs seemed to offer another solution. The steel-framed BISF (British Iron and Steel Federation) House had been designed by Frederick Gibberd during the war; 50 were built on the new Crowmeole Estate from 1948. Of the 329 new homes planned for the Springfield Estate from December 1948, 150 were Wimpey No-Fines, a form of in-situ concrete construction.  Of 624 homes planned for the Meadows Farm Estate from autumn 1950, 212 were of Wates pre-reinforced concrete panel construction. 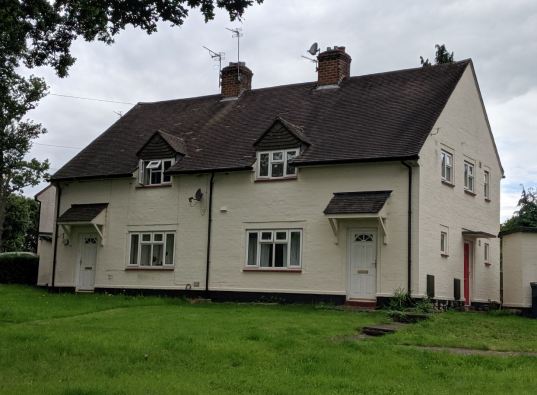 The majority of the homes, however, were traditional brick-built houses, most of conventional design, a few with a slightly more modernist aesthetic. Those built in the 1940s reflected the generous space standards of the Bevan era; those after 1951, the economising of the Macmillan era.

The occupation of disused military bases had been another – highly unofficial but practical – response to the post-war housing crisis. By October 1946 it was estimated that around 46,000 people were squatting some 1811 camps across the country. Similar direct action in Shrewsbury and vicinity came later – with reports of military buildings being occupied in 1948 in Monkmoor, Atcham and Forton amongst others – but testified to the same pressing need.

Occupation of Harlescott Camp, May 1949

The largest and best-organised local squat, however, began in May 1949 when Thomas G Ryder, local leader of the Amalgamated Engineering Union, led a group (complete with seven to eight lorries of furniture) that occupied 22 huts at RAF Harlescott. The trigger here seems to have been the belief that the buildings were about to be allocated to single Polish men working at the Sentinel factory. Ryder declared:

We are not going to allow it to become a glorified camp for Poles paid for by the British tax-payer when British families have nowhere to go.

I’ll let you determine the balance between laudable working-class activism and xenophobia in that particular episode.  Ryder himself would go on to become, in modern terminology, a ‘centrist’ leader of the Labour Group on Shrewsbury Borough Council and a senior manager at Sentinel.

Construction of new housing continued apace with the commencement, in 1954, of the 500-home Meole Brace Estate on the south-eastern fringes of the borough. As other towns looked to high-rise, plentiful land and, presumably, political choice kept Shrewsbury building low.  The rather austere five-storey blocks built by Wimpey at Meole Brace seem to have represented the physical, height of its ambition. 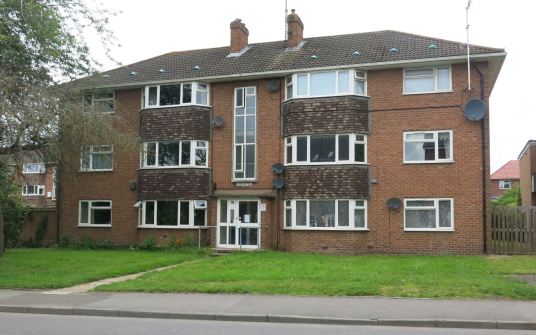 As the immediate housing crisis declined, thoughts turned again to the slum clearance programme begun in the 1930s.  Between 1955 and 1959, the Council demolished 515 unfit homes – around 144 deemed individually unfit but a greater number (371) in designated clearance areas. Three-storey blocks replaced derelict housing around Ditherington Mill; passages and courts in Frankwell and the town centre were also cleared.

By 1956, the council housing waiting list had increased to over 1700 and the Council faced having to rehouse some 794 families from homes designated unfit. This pressure brought about the borough’s next major housing expansion – a further 143 homes on the Meole Brace Estate and a large new estate on agricultural land at Harlescott Grange. (2) By the summer of 1958, the Council had built 2382 homes since 1945 and boasted 857 underway or approved.

Ditherington and Harlescott in 1948 showing Shrewsbury’s expansion to the north © Britain from Above, eaw017470

A local press report described Harlescott as ‘Shrewsbury’s industrial suburb’, a sign of the borough’s expanding manufacturing base. The Ministry of Housing and Local Government provided additional support to housing for skilled workers and the Council agreed that 20 of its ‘bonus’ 30 houses should be allocated to Rolls-Royce employees, the company having taken over the Sentinel works in 1956. (3)

Housing allocations, however, were controversial. Shrewsbury came late to a points-based system and, ironically, when it did in 1954, it downgraded what had previously been the sole criterion – overcrowding.  Now points were added for waiting time and local connection as well as obvious priorities such as number of children and medical need. Localism cam to the fore again nine years later when councillors across the spectrum unsuccessfully opposed the priority given to incoming skilled workers. (4)

Smaller schemes continued in the 1970s but the great age of council housebuilding was over.  Shrewsbury itself was amalgamated with Atcham Rural District Council (itself a significant housebuilder) in 1974 and together in 1994 – after the depredations of Right to Buy – the new council owned and managed 6205 council homes. Seven hundred fewer council homes – 5593 to be precise – were transferred by large-scale voluntary transfer to Severnside Housing in 2001.

Then Shrewsbury itself disappeared, administratively at least; absorbed in 2009 into the new unitary authority of Shropshire. An active Town Council (in fact, a newly created parish council) remains. By 2011, around 16 percent of the homes in the district were social rented, a little below the national average.

Shropshire Council is an overwhelmingly Conservative body but it’s a sign of the times and the new housing crisis that its 2017 Local Plan Review concluded that ‘the market is not, and will not, build the housing needed to meet the broad future needs of communities’.  Essentially, despite a significant building programme, private developers were failing to deliver the affordable and smaller homes that many local people required. (5)

It’s an uncomfortable echo of the case made by Shrewsbury’s first socialist councillor over a century earlier: ‘if it would not pay private enterprise to provide such houses, then the municipality must undertake the responsibility.’  (6)

The Council set up its own wholly-owned, private housebuilding company in February this year. It plans to build 2000 new homes, some for key workers, some for elderly people, some for younger people leaving care. Naturally today, ‘affordable homes’ and homes for sale are in the mix and it’s unclear what the proportion of social rent homes will be.  That market failure and local government intervention remind us that council housing as such – let at genuinely affordable rents – is as necessary today as it ever was when Shrewsbury’s housing efforts began. (7)

(1) WA Champion and AT Thacker (eds), A History of Shropshire, vol VI, Part 1 Shrewsbury General History and Topography (The Victoria History of the Counties of England, IHR, 2014). Other detail and quotations in this post are also drawn from this source.