We left Vienna in last week’s post in 1934 when its 66,000 municipal homes housed around one in ten of the city’s population.  Currently, 25 percent of Viennese citizens live in one or other of the city’s 1800 municipal housing schemes and, in total, 62 percent live in social housing. These may seem extraordinary numbers but more important than the mere numbers is a commitment to quality and inclusivity that makes Vienna’s social housing amongst the most popular in the world. Alt-Erlaa, which we’ll come on to, is one of its contemporary showpieces.

Politics and money make that possible so it’s right to begin with those. As the city’s logo proclaims, ‘Vienna is different’. With a population of 1.9 million, it is Austria’s sole metropolitan area and one of the country’s nine Bundesländer (provinces).  Austria’s federal constitution devolves considerable powers to its provinces, not least in housing policy, and Vienna – largely under the control of the Austrian Social Democratic Party since World War II (the party currently governs in coalition with the Greens) – has pursued an ambitious housing programme since 1947.

Nationally, social housing (here the term covers both social rented housing and subsidised homes for purchase) is financed by a fixed, earmarked portion of income tax and corporation tax as well as housing contributions paid directly by all employees. Nationally, Conservative politicians have favoured subsidised owner occupation whilst Social Democrats have supported social rental homes in various forms.  In 2018, Vienna was allocated around €450 million to spend on housing – around £405 million at the time. (1)

Right to Buy legislation affecting parts of the social housing stock was passed nationally in the mid-1990s but has been resisted by provincial governments and had little impact. In Vienna, some 8000 formerly social rent homes have been bought privately but the loss has been made up by new construction.

In comparison to the UK, Vienna – and Austria – remains a renters’ paradise. Rent controls imposed under 1917 Tenancy Act remain largely in effect to the present. All social renters benefit from indefinite tenancies as do the two-thirds of private renters in Austria whose homes were built before 1945. Liberalising reforms affecting new tenants enacted in 1994 have weakened private sector rent controls and introduced fixed-term tenancies. Their effect has been to create a far more dualised system than hitherto, favouring those – in both public and private sectors – with long-established tenancies against those increasingly reliant on the market. (2)

Social rents vary widely according to length of tenure and the size and nature of the home but on average tenants pay under a third of their income on rents, generally less, with, of course, additional financial support for those in need. A recent calculation estimates that in Vienna tenants pay on average 21 percent of their income on a one-bed flat compared to 49 percent in London. (3)

Crucially, this relative affordability is not a pretext for confining social rent housing to the poorest. Income thresholds for eligibility are set at around €46,500 for a single person and €69,000 for a couple (about £42,000 and £62,000 respectively).  In the words of housing spokesperson Christiane Daxböck:

Vienna has always said that it doesn’t want ghettos. Today, there is not one area where you wouldn’t dare to go. There’s a social balance throughout the districts, and a high quality of life, peace and security. The reason for that is mostly found in social housing.

To Kathrin Gaál, Vienna’s lead councillor for housing, ‘what makes Vienna unique is that you cannot tell how much someone earns simply by looking at their home address’. (4)

Since 2004, the municipality’s social housing construction programme has been outsourced to housing associations and cooperatives.  Fortunately, this long-established and well-regulated sector has a good record in delivering decent and affordable housing (though rents are slightly higher than in municipal equivalents) over many years.

One such, GESIBA, was jointly founded in 1921 by the Austrian government, Vienna City Council and the Association for Settlement and Allotment Gardening. At that time, over 30,000 families were squatting public and private land on the city fringes in a series of so-called ‘wild settlements’ and the Gemeinnützige Siedlungs- und Bauaktiengesellschaft to give it its full name –  a Public Utility Settlement and Building Material Institute – was charged with providing cooperative and settler associations with cheap building materials. It went on to build 5000 family homes in the 1920s and, since the revival of social housing after 1945, it has become one of the largest non-profit housing providers in the country, managing around 22,000 homes. (5)

Its most prestigious scheme is Wohnpark Alt-Erlaa – a housing estate, more properly a satellite town lying six miles south-west of Vienna’s city centre, built between 1973 and 1986.  With 3172 homes and a population of 10,000, it is Austria’s largest social housing complex. It is also, without doubt, its most striking and, in my eyes at least, one of its most attractive.   To George Clarke, architect and housing campaigner, it is ‘humane caring design of the highest order’. (6)

Alt-Erlaa was the brainchild of architect Harry Glück. To a visitor, his sweeping vision is seen firstly and most obviously in the 70-metre, 27-storey-high cascading, terraced blocks that dominate the scheme.  The first twelve storeys have broad balconies and large plant troughs, providing a greenery and privacy that soften an architecture that might otherwise seem overpowering. (7)

Glück’s design concept rested on the ‘stacked family home’ and 65 percent of the apartments have at least three bedrooms though the 35 different floor plans across the scheme provide for a wide variety of housing needs.  The single-aspect nature of the design leaves natural light short on the corridor side but seems to work in context.

But Glück went further in his ideal of ‘building for the lower classes with the quality the rich people are fond of: close to nature and water’.  Alt-Erlaa is situated amongst winding paths and landscaped parkland – quiet and a little bare when we visited on a cold but sunny day in early February – but a green and pleasant environment. Fittingly, the parkland bears his name. (8) 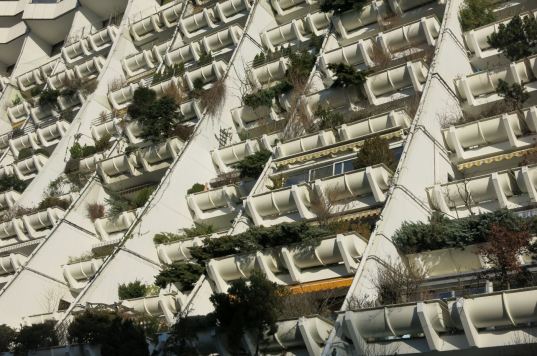 There are six children’s playgrounds within the park but naturally, in a scheme built in the proud tradition of Red Vienna, the social infrastructure extends much further. There are two nurseries, a children’s day care centre, a sports hall and tennis courts, a church, three schools, a youth centre, a multipurpose hall, two health centres as well as a local shopping centre. 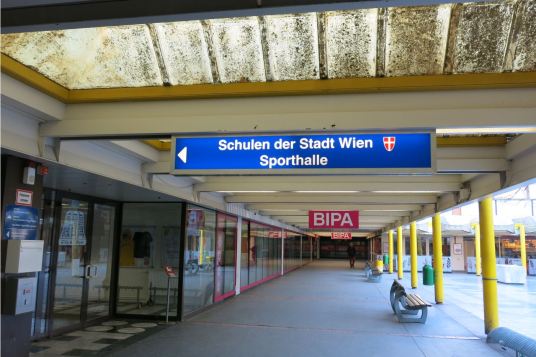 The headline feature which almost does justify one of George Clarke’s interviewees describing the complex as a ‘five-star hotel’ are the saunas, solariums and swimming pools on top of each of the main housing blocks. Unsurprisingly, the scheme enjoys a 93 percent favourability rating amongst its residents and there is currently a five-year waiting list for apartments. 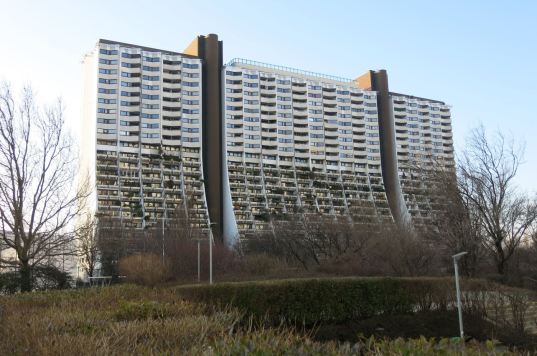 It’s all a reminder of what progressive policies, proper public investment and idealistic and intelligent design and planning can achieve.  And a symbol of all that public housing can and should be.

For some fine photographs of the estate and particularly its community life, see Zara Pfeifer, Du, meine konkrete Utopie (text in English)

For a good film essay on the history of Vienna’s social housing, see Angelika Fitz and Michael Rieper, How to Live in Vienna (2013) with English subtitles.

(2) For a full and critical examination of the currently complex housing situation in Vienna, see Justin Kadi, ‘Recommodifying Housing in Formerly “Red” Vienna?‘, Housing, Theory and Society, vol 32, no 3, 2015

(4) The first quotation is drawn from Denise Hruby, ‘Why rich people in Austria want to live in housing projects’, GlobalPost, 26 October, 2015; the second from Forrest, ‘Vienna’s Affordable Housing Paradise’