Portsmouth is the UK’s only island city.  Though the relatively narrow Portsbridge Creek, on the landward side, has been bridged several times, historically the city’s location has given it the highest population density in the country and it’s helped contribute to what is a particularly rich and diverse housing history.

Portsmouth’s population grew from around 32,000 in 1800 to over 188,000 by century’s end.  That rapid growth created the poor housing conditions typical of the era; a cholera outbreak in 1849 killed around 1000 people and a Government health inspector Robert Rawlinson described the town as ‘one huge cesspool’. It had become through its long Victorian terraces what some call ‘the northern city on the south coast’.  (1)

Municipally, our story begins in 1909 when the unusually go-ahead Medical Officer of Health of the Borough Council (it became a city in 1926), Dr Andrew Mearns Fraser, carried out a survey of Portsmouth’s insanitary housing. He identified, in a report entitled ‘Improvement Scheme for an Unhealthy Area in Portsea’ published the following year, a particular area near the naval dockyards as worthy of reform and, unusually, recommended not mere clearance or a garden suburb but an inner-city town planning scheme. (1) 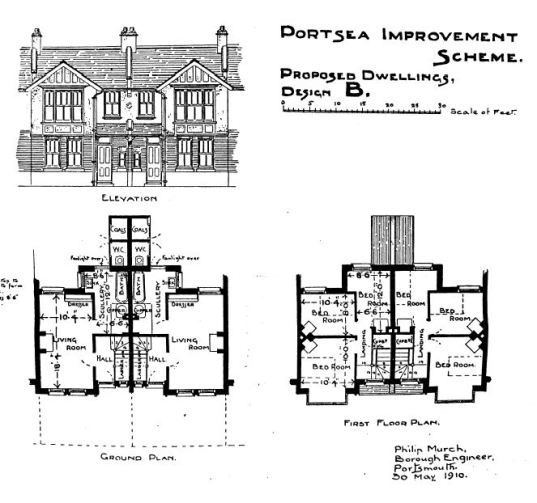 A notable feature of Mearns Fraser’s proposal was a central square ‘planted with trees, which shall be a lung for the neighbourhood, and afford a playground for children’.  His determination to tackle the prevalence of lung disease in the neighbourhood (seven times higher than the rest of the borough) was shown in another innovation; whilst the cottage designs generally reflected the progressive influence of housing reformer Raymond Unwin, Type B offered ’a more original plan’ – a single, dual-aspect ‘large, and well lighted living room’ to replace the smaller parlour and living room then usually favoured.

In the end, cost-cutting won the day. Though 193 run-down houses were demolished, a far more conventional – though still attractive and well-proportioned – linear street of 43 new houses emerged. The council could, however, still take justifiable pride in Curzon Howe Road when it was officially opened in October 1912.  The Cluett family recorded a tenancy of 76 years at no 26, beginning in 1915 but apparently now just three of the homes remain in council ownership.

The plaque unveiled in 1912 and pictured contemporarily

The First World War and its aftermath brought more pressure to clear slums and build the ‘homes for heroes’ promised by prime minister Lloyd George. The Council, still securely in Conservative hands, hesitated initially, concerned over high building costs (at around £1000 per house) and rents likely reaching 12 to 16 shillings (60 to 80p) a week. It’s an indication of the pressure brought by central government at the time that it took a phone call from the Ministry of Health and Housing’s local commissioner – threatening a motion for default against the council – to force its hand. (3)

Councillor Charles Childe (chair of the Housing Committee) at least was clear that the Council must seize the moment:

He agreed the housing schemes were not a business proposition, but there was a side of the housing question that was not economic. By carrying out these schemes they would be providing for the health and betterment of the people. It was better to spend money in that way rather than in building sanatoria.

In the end, helped by a 1920 boundary extension which incorporated Cosham and Wymering on the mainland to the north, Portsmouth built 591 homes under Christopher Addison’s 1919 Housing Act.  Among the largest estates were Henderson Road in Eastney, with 254 homes, and what was called a little grandiloquently Wymering Garden Village. After that, the Council’s eloquence failed and most of the estate’s hundred or so new houses – good quality homes along tree-lined streets – were built on First, Second and Third Avenues off Medina Road.

Unusually this pair of houses on Medina Road, Wymering, is precisely dated: 1924

Lloyd George’s promise and Addison’s programme were cut short by spending cuts in 1921 but municipal housebuilding was revived by Housing Acts in 1923 and, more importantly, 1924.  Portsmouth built 951 homes under the 1924 Act, most dotted around the island, a few to the far north on Portsdown Hill. 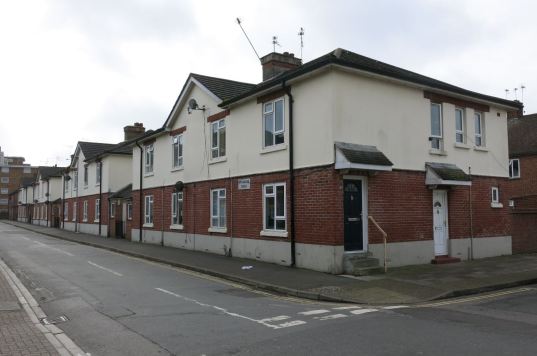 Nationally, the housing programme took a new direction in 1930 when Arthur Greenwood’s Housing Act targeted slum clearance and the rehousing of its residents for the first time. Here Portsmouth was ahead of the game, having demolished 381 derelict homes in Portsea under the 1924 Act.  Eighty-nine further homes were cleared around Voller Street in Landport.  The street disappeared but the 52 cottage flats built to replace them on St Faiths and Temple Streets remain.

Campaigning by the local press may have played its part. The Evening News invited readers on the waiting list – over 1000-strong in 1924 – to send details of their housing circumstances and it publicised the most egregious cases, for example a five-roomed cottage inhabited by twelve people: ‘the applicant has six children and his wife died of tuberculosis and the lodger is in the last stages of the disease’, it reported. (4)

Portsmouth built a further 1148 homes under the 1930 legislation – houses in Landport and Portsea on the island and major schemes to the north in Wymering, north of Whitstable Road and south of Medina Road on the so-called Isle of Wight Estate where roads were named after Wight towns.

Slum clearance remained a priority, however, pushed by central government and encouraged by Mearns Fraser’s successor as Medical Officer of Health, Dr AB Williamson, who described slums as ‘radiating centres of disease and health and mental degradation’ at a local church conference in 1934.   That message was endorsed by Councillor AE Allaway, chair of the Health Committee, who was clear that ‘money spent on slum clearance will be more than saved in other health services’. (5)

For the moment, Portsmouth was prepared to put its money where its mouth was. The Council had scheduled (declared for clearance) fifteen areas, nine of them on the island, involving the demolition of 796 homes and the rehousing of some 3659 residents. Some 508 individual insanitary houses were additionally slated for demolition. In total, the Council estimated around a 1000 new council homes would be required. (6)

The issue of where this housing should be was also beginning to preoccupy the Council.  Councillor Allaway hoped that by means of three-storey flats it would be possible to ‘to put quite one-third more people on the sites than if we built houses’.  By 1937, turning back to the pioneering work of Andrew Mearns Fraser, a Special Committee of the Council had been convened ‘to consider the layout of the Portsea area’. (7)  The time and expense of travel to work from distant Corporation suburbs were a particular issue for many of the poorer residents displaced from central Portsmouth.

By 1939, the Council had built 2806 new homes. Around 430 of these were flats in the inner city including those in Privett House, a five-storey block north of Cumberland Street, commenced in the late 1930s. 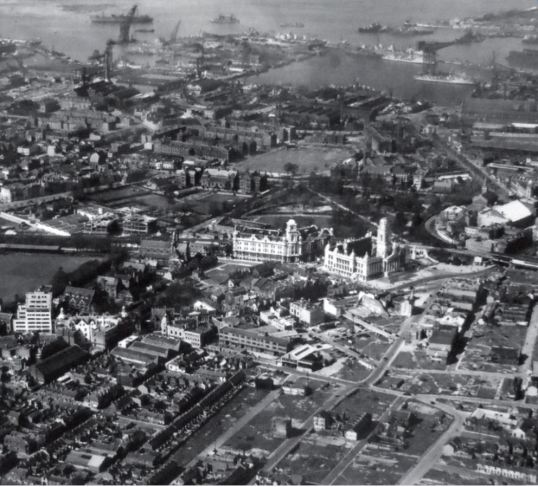 This image of the centre of Portsmouth with cleared bombsites in 1950 shows the extent of the impact of wartime bombing.

But that constructive work was rapidly overshadowed by the devastating impact of the Blitz on Portsmouth. From July 1940 to May 1944, the city suffered 76 air raids and some 930 civilians were killed. It was estimated 6625 houses were destroyed – around 10 percent of housing stock – and a further 6549 severely damaged. 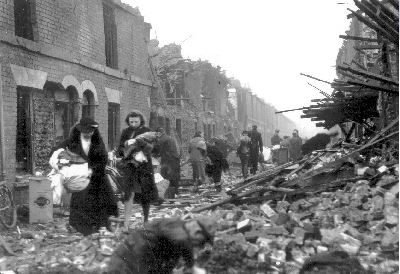 This photograph of Conway Street in Landport in 1940 shows its personal impact.

Typically, planning for the post-war world began early with the Council setting up a Special Replanning Committee in February 1941. It was boosted by a visit from Lord Reith, Minister of Works and Buildings, in March at which he urged Portsmouth ‘to plan boldly and on a large scale … with the expectation that a good many of the difficulties that have prevented them doing so in the past will be adjusted’. FAC Maunder, then Deputy City Architect, was tasked with preparing preliminary proposals for the Council. (8)

Other interested parties also made their views known. A Replanning Advisory Panel of the Chamber of Commerce, set up in July 1941, recommended the dispersal of around 50,000 of the city’s current population to large new settlements on the mainland. In 1943, the Replanning Committee of the local Labour Party urged municipally owned estates and ‘self-contained houses wherever possible’.  Despite their political differences, both reports opposed flats except, in the Labour Party’s words, ‘in a few instances where absolutely necessary’. In this, they captured popular sentiment: a Mass Observation survey in the city showed 92 percent wanting to live in a house rather than flat. (9)

Maunder’s report, accepted with one dissentient, was published in February 1943 and largely followed these lines. It advocated an urban (in effect, island) population of 150,000 at no more than 70 persons per acre, grouped – the coming idea – into neighbourhood units. Its big idea was to disperse around 60,000 of the current population into two new settlements, one around Leigh Park (on land within Petersfield Rural District and Havant and Waterloo Urban District) – envisaged as a satellite town, ‘the Garden City of the South’ – and another, more of a dormitory estate, around Waterlooville.  Maunder himself was appointed City Planning Officer heading a new City Planning and Reconstruction Department in July 1944.

Little could be achieved under the exigencies of war but the Council had already acted boldly as Reith had advised in setting in motion the purchase of land at Leigh Park. It had rather daringly entrusted Conservative councillor FGH Storey with full powers to negotiate the deal as early as August 1943 and the land (with an additional extension in 1946) was bought in 1944.

We’ll continue this story in next week’s post, examining what became – amongst other things – of those high ideals around Leigh Park and the conflicting ideas around suburban and inner-city development.

(1) Portsmouth City Council, A History of Council Housing in Portsmouth (2011).  The ‘northern city’ quotation is drawn from John Ashmore, ‘Rebalancing Britain: The northern city on the south coast’, CAPX, 18 July 2019.

(3) Details drawn from ‘Portsmouth Council. More About the New Houses: their Cost when Erected’, Hampshire Telegraph and Post, 14 May 1920 and ‘Portsmouth’s Housing. The Council and the Hill Scheme’, Portsmouth Evening News, 4 December 1920

(6) Councillor AE Allaway, ‘The Housing and Slum Clearance Problem in Portsmouth’, Journal of the Royal Sanitary Institute, vol 55, no 1, January 1934

4 thoughts on “Council Housing in Portsmouth, Part I to 1945: ‘Providing for the health and betterment of the people’”