If your image of Bath is Regency beaux and Jane Austen (or only that), think again. There’s a working town beyond the Crescents and that town had the slums and squalor typical of its age before 1914.  If the problems were typical, Bath’s response was not.  It became an early pioneer of municipal housing and, as so often in this early period, that response owed a great deal to the zeal and professionalism of key individuals. It was a city too where social housing would have an unusually significant and sometimes controversial visual impact.

William Symons became the town’s Medical Officer of Health in 1896, aged 42. His worthy but conservative predecessor had generally taken a laissez-faire attitude to the town’s housing problems but Symons was determined to take full advantage of the new powers granted by the 1890 Housing of the Working Classes Act.

North of Julian Road and little more than five minutes’ walk from the Royal Crescent lay Lampard’s Buildings and within that area, Viners Court.  Here there were ten cottages: (1)

originally two-roomed, but the upper has been divided in two by a wooden partition…In such  cabins as this two or three children sleep in six of the cottages.  As regards water supply, one tap provides for the wants of 54 persons. The WCs in the front gardens, one being common to two houses, are fully exposed to view and are difficult to access by night or in bad weather.  This leads to the retention of excrement in vessels in rooms, which are otherwise filthy…All this within a stone’s throw of some of the best property in Bath.

Symons condemned the housing as unhealthy and persuaded the Council to demolish and rebuild.  After some delay in acquiring the land, plans – drawn up by the City Surveyor, Charles Fortune – were approved in 1902.  The Lampard’s Buildings municipal housing scheme of 36 homes – made up of two-storey houses of two and three bedrooms and four one-bedroom tenements for a population of around 176 – was completed in 1906.

The housing, though an improvement on the insanitary slums which preceded it, was basic.  The homes had no bathrooms and toilets were provided in outside lean-tos.  It wasn’t a cheap development, however.  While the new housing itself cost £7200 to build, compensation to existing owners, purchase of old properties and the erection of retaining walls necessary on the steeply-sloping site added an additional £9500.

The plans and elevations of the three-bedroom Type B housing, approved by the Local Government Board in 1902 (taken from Hitchcock, ‘Public Housing in Bath, 1890-1925’)

Still, William Thompson, that indefatigable campaigner for municipal housing in Richmond and elsewhere, could claim that ‘a wonderful improvement in the neighbourhood’ had been effected.  (2)

Symons had also identified another area urgently requiring redevelopment. Dolemeads was a seven acre site wedged between the Kennet and Avon Canal and the river.  Prone to frequent flooding, it was known locally as Mud Island.  The building of the Great Western Railway viaduct through the area in 1840 did little to add to the area’s amenities. 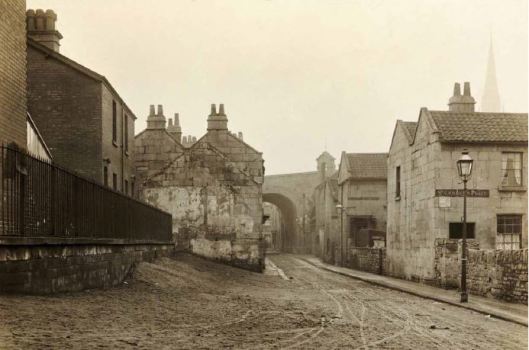 Middle Lane (later Broadway), Dolemeads, in 1901. The first new cottages, raised above flood level, are shown to the left. © Museum of Bath at Work

In 1898 the Council obtained an estimate for ‘the cost of preparing the site at Dolemeads and raising it to a sufficient height above flood level’.  Preparatory works – raising the site, building a new street, providing sewers, drains and foundations would cost £937 before the construction of new homes – 36 houses of four rooms each and four of five rooms – could begin. (3) 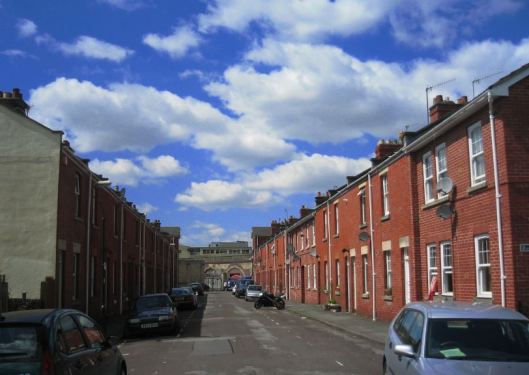 Fortune – who described these municipal housing schemes as his ‘magnum opus’ – was again the architect and the houses were very similar to those of Lampard’s Buildings though constructed of a cheaper and locally uncharacteristic red brick rather than ashlar.

The first were opened by the Dowager Lady Tweedmouth – a local resident and Liberal matriarch (a grand-aunt of Winston Churchill and the mother of a Progressive member of the London County Council’s Housing Committee) – in July 1901. Another eighteen – on the eastern side of Archway Street and Middle Lane – were erected before the outbreak of war.

With rents set at 5 shillings (25p) for the smaller homes and 6s 6d (32.5p) for the larger, this was, as Dr Symons recognised, housing for the better-off working class:

There will no doubt be a ready demand for them at these rentals; but it is obvious that they will be occupied by the well-to-do artisan classes and cannot be considered as making provision for the very poor.

Some of the terraces suffered bomb damage during the Second World War and others were cleared in the 1970s.  Still, the area remains a little red-brick enclave in Bath and a testimony to early improvement ideals though Patrick Abercrombie, in his 1945 Plan for Bath, would later be critical of the dull uniformity of this ‘bye-law’ housing. (4)

The 1970s would also see the Council inflicting a far greater affront on some local sensibilities.  The so-called ‘Sack of Bath’ saw the demolition of the original Lampard’s Buildings council housing alongside six dilapidated terraces of Georgian and Victorian housing in a comprehensive redevelopment scheme.

The Ballance Street Flats erected on the site between 1969 and 1973 were designed by City Architect and Planning Officer Dr Howard Stuchbury.  It’s a development of 350 flats and maisonettes with ‘as much exposed concrete as Bath Stone and the approach to its building was uncompromising’.(5)

Critics thought its scale and exposed concrete ill-suited to Bath’s architectural context and perhaps to local gentility.  One described it as ‘the most detested addition to the Bath scene’: (6)

Tall, angular, inappropriate, overbearing apartment blocks, crowded again with frowning sham mansards. They demand our attention and insult our senses…ugly, intrusive, and tasteless; out of character and scale and harmony.

They don’t to me look that bad from the photographs and they did, of course, provide good city centre accommodation for the less affluent citizens of Bath.  But public outcry ensured further rebuilding was abandoned – a rather sad last hurrah for Bath Corporation’s ambitions to rehouse its people.

Local circumstances lent peculiar force to a wider national context which was turning away from high-rise housing and towards the reconditioning of homes which earlier generations had condemned as slums.  From 1979 the very idea of council housing at all was being anathematised.

Between times Bath had built garden suburbs, tenement blocks, prefabs, high-rise – in fact, the whole range of housing types by which the national and local state had once sought to provide good quality and genuinely affordable accommodation for its people.

This could not be a flawless record but it was a noble endeavour which fortunately – perhaps surprisingly – in Bath has been appropriately honoured.  We’ll revisit it and if you visit Bath look beyond the Royal Crescent and give respect to the more democratic ideals represented in the city’s social housing.

(5) Museum of Bath at Work, ‘The Best for the Most with the Least: Council Housing in Bath – a Social History’

A big thank you to the Museum of Bath at Work for providing details of their exhibition on the history of Bath council housing which closed earlier this year.  The Museum is situated near to Ballance Street Flats in an eighteenth-century building saved from those over-ambitious redevelopment plans of the 1970s.

I’m very grateful also to the Bath Preservation Trust for providing a copy of the Malcolm Hitchcock article.  Their page on Post-War Bath contains a number of useful resources on the city’s more recent history.

Bath in Time has many excellent photographs of the developments and redevelopments described here.

4 thoughts on “The First and Last Council Housing of Bath”