We left Hull in last week’s post standing, figuratively at least, in its civic heart, Queen Victoria Square.  We’re looking at municipal Hull – the plans and promises as well as proud accomplishment.

Queen’s Gardens, which lie beyond Queen Victoria Square to the north-east, fall somewhere in the middle of that spectrum.  The area was once the Queen’s Docks, the first Hull docks constructed in the 1770s.  Obsolete by the interwar period, they were sold to the Corporation, infilled and opened (by Labour MP Herbert Morrison) as a park in 1935 and, as such, were a key element of the 1930s’ redesign of the city centre.   The fountain at the western end survives from that time but the Gardens as a whole were remodelled by Frederick Gibberd from the 1950s, building on the earlier Lutyens and Abercrombie vision for a new grand civic space, including assembly hall and winter gardens, which incorporated the Guildhall to the south.

Those larger ambitions remained unfulfilled and the Gardens remain poorly integrated into the wider cityscape – an issue addressed by a new masterplan issued in 2013 – but it’s a lovely space and walk into them to appreciate some fine past and present landscaping and public art. (1)  Amongst the latter are reliefs by Robert Adams by the pond at the eastern end and five panels by Kenneth Carter on a northern wall in front of the 1959 former Police Station, both commissioned by Gibberd (a great patron of public art as we’ve seen in Harlow).

What will catch your eye is the grand terminal vista of the Gardens at their eastern end.  The Wilberforce Monument (local boy William Wilberforce was the town’s MP from 1780) was erected by public subscription in 1834, just one year after the slave trade against which Wilberforce campaigned tirelessly was abolished in the British Empire, and moved to its present site in 1935. 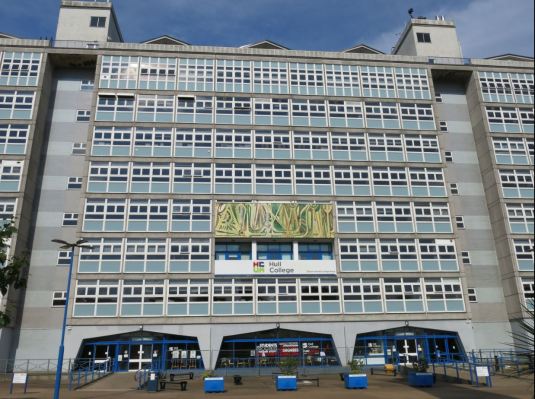 Beyond it lies the Hull College of Technology (now Hull College), designed by Gibberd in Festival of Britain style in the 1950s, but completed in 1962.  Old Pevsner didn’t much like it – ‘run of the mill’ it thought – but the new guide is more complimentary of its ‘agreeable symmetry’.  A William Mitchell panel – depicting nautical and mathematical instruments – sits strikingly on the building’s façade.

From the College head south towards Alfred Gelder Street.  Alfred Gelder, an architect by profession, councillor and alderman for 43 years, was another of the nonconformist Liberals who left their progressive mark on the city.   The English Baroque-style Guildhall and Law Courts complex, designed by Edwin Cooper, on the street fittingly named after Gelder was begun on the latter’s initiative in 1905 and completed in 1916.  It’s a striking presence, monumental externally, lavishly decorated internally: a powerful statement of civic pride and purpose. 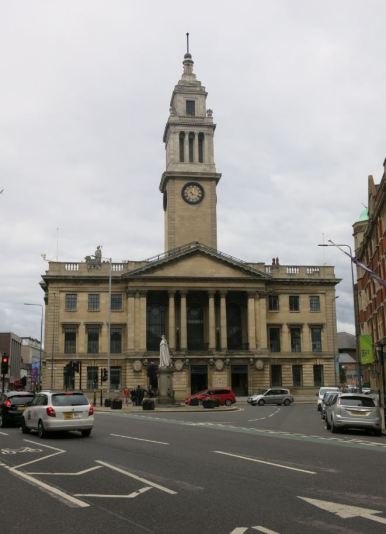 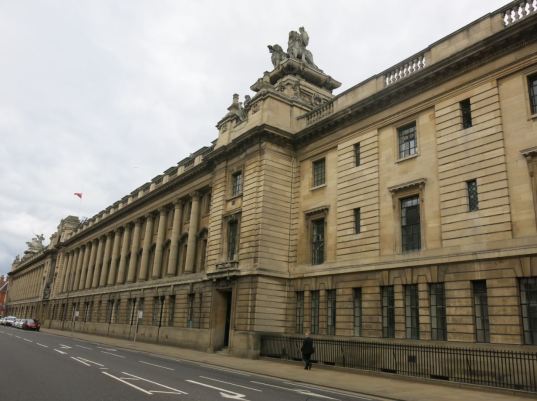 Facing the Guildhall on opposite sides of the road are the Maritime Buildings, a fine Edwardian office block, Grade II listed, awaiting new use and some TLC, and the former General Post Office, fully justifying its architectural descriptor, Edwardian imperial.  Buildings of their time just as their current redundancy or repurposing indicates changed times.  A Wetherspoons in the former post office building allows you to see some of its former grand interior. (2) 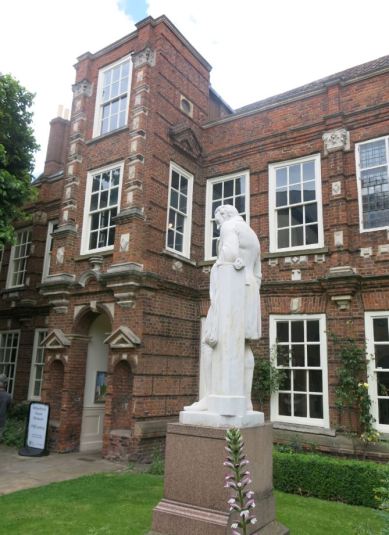 From here it’s a short walk to the heart of Hull’s Old Town (the new town of the 14th century) and at the top end of the High Street, the city’s Museum Quarter – three excellent museums run by the council and free to enter.  Wilberforce gets due recognition in the house, now museum, where he was born and grew up.

Municipal tram in the Streetlife Museum

But a shout-out here for the excellent Streetlife Museum which offered a great combination of transport and social history – and a chance, keeping to my municipal theme, to take a photograph of a Hull Corporation tram of pre-First World War vintage.  The trams were municipalised in 1896, converted to a trolley-bus system in 1945, and finally closed in 1964.

Walking further south along the River Hull, you come to some impressive infrastructure – Myton Bridge, a swing bridge carrying the A63 opened in 1980, and the Tidal Surge Barrier of the same year designed by Oliver Cox.  Cox made his name as a major figure in the housing division of the London County Council’s Architects Department so it was impressive to see the versatility displayed in this later work.

Further on is The Deep, designed by Terry Farrell and completed in 2002 – an aquarium and major visitor attraction intended to regenerate this redundant area of former dockland. 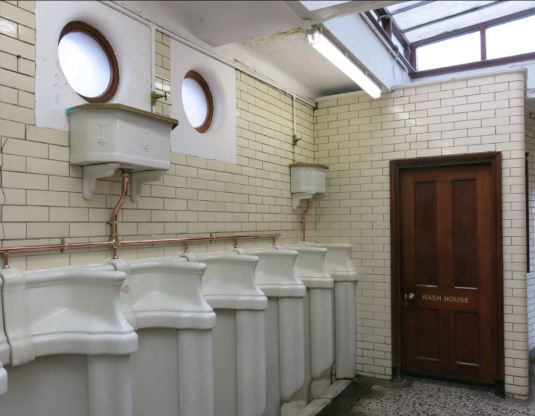 I should really spend more time on that bit of self-consciously showpiece architecture but we’re walking on, west along the Humber, towards Nelson Street and the now celebrated public toilets, Grade II listed (alongside the Tidal Surge Barrier and some other Hull landmarks) a few weeks ago. (3) Opened in 1926, the provision for women as well as men was innovative for the time and offers its own bit of social history as a mark of the greater independence allowed women in the interwar period. Otherwise, just enjoy the quality and beauty of the original Art Nouveau styling and fittings which survive to the present. (4)

Finally, on this perambulation, you can stop off for some well-earned refreshment in the revitalised Fruit Market area around the corner on the eastern side of Princess Docks. Now rebranded as an arts and cultural quarter, not so long ago it was just what it said it was as some of the surviving shopfronts and signs on Humber Street testify.  The Gibson Bishop building on the corner – once a fruit and vegetable merchant and now Thieving Harry’s café – is another fine example of 1950s’ reconstruction.

All that represents a full day’s visit but, hopefully, you’ll take time to explore the city further.  I’ll conclude with another idiosyncratic, municipally-themed, selection of other highlights. 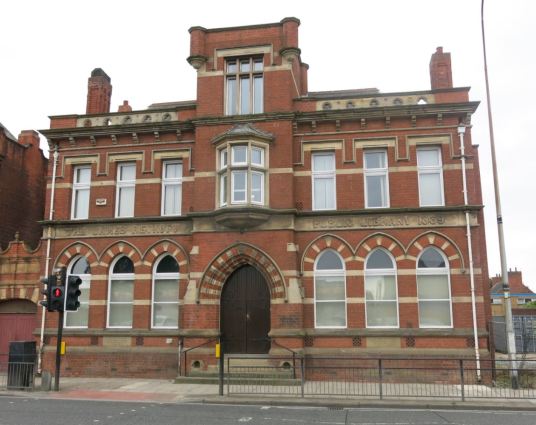 Immediately adjacent are the more exuberant East Hull Baths, designed by Joseph H Hirst, then of the City Engineer’s Department, and opened in 1898.

A little under a mile further east, you reach the edge of the garden village developed before the First World War by Reckitt for the workers of his nearby works.  It’s a beautiful ensemble though now, for the most part, firmly for the more affluent middle classes.  The sweetly-named Frederick I Reckitt Havens, run by Anchor Housing, remain a not-for-profit enclave for elderly persons.

– The ‘Khyber Pass’ in East Park

Next is East Park, originally 52 acres, now 120, designed by Borough Engineer Joseph Fox Sharp and opened by the Corporation in 1887. The Khyber Pass folly was constructed, possibly as a project for the local unemployed, between 1885 and 1888.  Not the worst reminder of Britain’s imperial past perhaps.

Alternatively head north along the Beverley Road, there are more examples of progressive municipal endeavour – the Stepney Primary School, a Queen Anne-style building of the Hull School Board erected in 1886 and, next door, the Beverley Road Baths, designed by Joseph H Hirst, again, in 1905.

Further north along Beverley Road is Britain’s last surviving Second World War Blitz site. The National Picture Theatre, a 1914 cinema, was bombed in 1941 and has remained largely undisturbed since then as an unintended memorial to wartime destruction.  There are now plans to resurrect the listed building as a formal commemoration of the era.

Pearson Park just to the west, originally the People’s Park, opened in 1862 – the city’s first public park – is a superb example of Victorian concern for working-class wellbeing and healthy recreation (even while the latter didn’t generally extend to their profit-making working lives or usually squalid homes).  The poet Philip Larkin’s home, another of the recently listed sites, is an attractive middle-class residence of the 1890s on the northern edge of the park.

Larkin was famously chief librarian of Hull University which lies off Cottingham Road to the north.  If you cut across west from Beverley Road, you can take in another of the Hull Board’s fine schools, that on Sidmouth Street, erected 1912 and designed by the industrious Joseph H Hirst.

Across the road and on Exmouth Street nearby you’ll see some rare surviving examples of the court housing – short facing terraces built as cul-de-sacs off the main roads – which dominated much of the city’s working-class housing before the First World War.  These are later, and better built, examples from the 1880s.  One of the residents we spoke to was pleased that a couple of people up from London had ventured beyond the city centre. 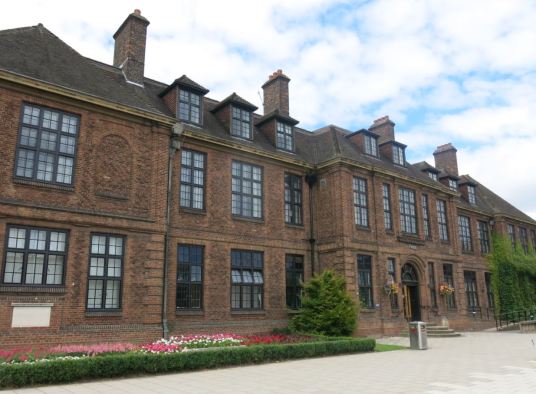 – The Venn Building, University of Hull

On to the University and we’ll stretch a point here – though not too far – to make this our final example of municipal investment and innovation. The University was founded in 1925 on the back of a £250,000 donation from Thomas R Ferens and a £150,000 grant from the City Council.  There’s a lot of good architecture to be admired here but I’ll give you the Venn Building of 1928 (‘Neo-Early Georgian’ according to the experts) designed by William Forsyth to capture these interwar origins.

And that’s it. I’ve done a bit more than scratch the surface but all this is only really a taste of what Hull has to offer and a poor substitute for a visit in person.  Above all, it’s a reminder of the huge and important role that local government – as well as a broader civic culture supported by progressive actors – has played in the building and civilising of our cities.

Hull’s deserved status as the UK’s City of Culture in 2017 marks a later iteration of this same endeavour and I hope that the investment and interest it has attracted genuinely improves the lives of local residents as well as entertaining mere visitors such as myself.  I’ll end with a plea that this revival of municipal dreams is an exemplar, not a one-off – a testimony, like so much of what went before, to how a properly resourced and ambitious municipality can improve the lives of its citizens.

Much of the architectural detail in this post is drawn from the invaluable Hull (Pevsner Architectural Guides, 2010) by David and Susan Neave.

(3) For fuller detail on all the new Hull listings, take a look at the Historic England webpage.

(4) Of course, the issue of public conveniences (or present-day inconvenience) isn’t merely a matter of historic or architectural interest. The provision of public toilets was an important part of municipal service in its earlier years and the withdrawal of such provision is a major concern to many sections of the community now.  This is well dealt with, past and present, in a Hull context, in Paul Gibson’s post on Public Toilets in Hull.

Jones the Planner offers a full and more critical perspective on Hull’s post-war planning and architecture in ‘Hull: City of Culture’ (9 February 2014) and, alongside other case studies, in the book Cities of the North (2016).