Sometimes, when we got there in the morning the snow would have blown in on to the tables and chairs and we would have to clear it off before we could start.

But by all accounts, it did Norman Collier, a pupil at the Aspen House Open Air School in Streatham in the 1930s, ‘the world of good’.

The school was opened by the London County Council in 1925 for pupils described at the time as ‘pre-tuberculous’ – children who were anaemic, asthmatic or malnourished.   It was the fifth of the LCC’s open-air schools.  The first had been opened in Bostall Wood in Woolwich on land donated by the Royal Arsenal Cooperative Society in 1907.  But it was the first built to the council’s ‘improved design’ which would go on to be used in fourteen schools across the capital.

Administrative offices were contained in the adapted stable block of the villa which had formerly occupied the property and there was additional space provided for dining and sleeping – both important parts of the school’s regime we’ll examine later.

But the heart of the school lay in its classrooms – four square pavilions, built on timber posts with timber half-walls and exposed roofs.  The continuous windows above the dado were unglazed until sometime in the 1950s. (2) 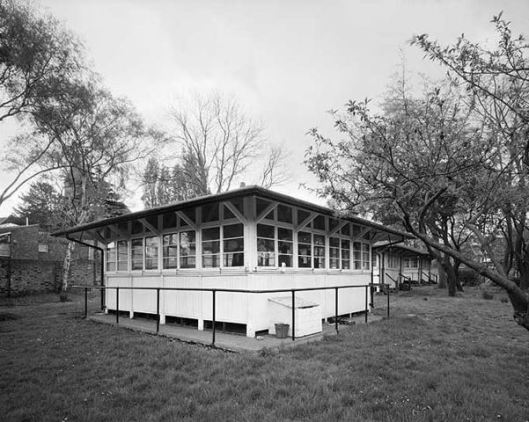 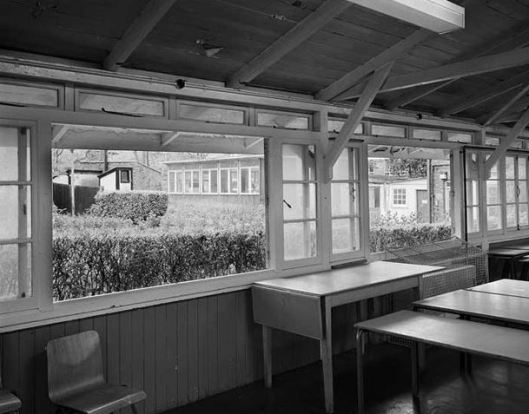 Of equal importance were the school grounds.  For the school’s first head teacher, Mr IG Jones, there was no such thing as too much fresh air: (3)

Although our classrooms are open-sided shelters which cannot be closed, yet it is much pleasanter to work in the open-air without a roof overhead whenever possible.

This outdoors teaching required ‘stands’ and raised pathways – ‘eighty large duckboards or wooden slats were made; measured and cut by the bigger boys and nailed together by the smaller ones’.  The boys also made ‘coat-racks, toothbrush racks, soap boxes, carrier boxes with handles for gardening purposes’.

There’s no mention here of the school’s female pupils but they played their full part – albeit in traditionally gendered fashion – in the gardening, nature study and handicrafts which were a major part of the Aspen House curriculum.  Mr Jones founded a bee keepers’ society, for example, for older pupils and one admiring observer noted: (4)

one of the most remarkable results of the training in this delightful school is the spirit of cooperation that makes the children feel the garden belongs to all, and its pleasures should be shared by all.

In 1930, the school roll comprised some 204 pupils – perhaps the peak number: 115 boys and 89 girls.  They travelled from across London, receiving breakfast before lessons began at nine. They remained until around four, provided dinner and tea and required to take an early afternoon nap of between one and two hours in special hammocks with their own designated blankets.

In these early years, each pupil also received a weekly bath. A full-time matron on-site and regular medical examinations completed a regime which catered to body and soul.

This was an education rooted squarely – though without the rhetoric – in the principles of the Swiss pedagogue, Johann Heinrich Pestalozzi: a focus on the equilibrium between head, hands and heart, a belief in the free development of each child’s potential through observation and discovery of nature and the material world.  Don’t tell Mr Gove!

Norman Collier remembers that the pupils were all taught their Three Rs but generally they remained at the school for around eighteen months before resuming a more conventional education.  Students remember principally the kindness of teachers in an era where home circumstances and schooling were not always as kind.   JV Morley recalls only one instance of caning – ‘frankly deserved’ – when one boy had struck another with a milk bottle.  (5)

Aspen House remained in these premises until 1977 when it moved to new purpose-built premises in Kennington Park where it still operates as a ‘Community Special School’.  In those fifty years and beyond, it serves to remind us of the best of local government education – now so maligned – and a vision of schooling which catered for the wellness and wholeness of its students.

Few now believe that its spartan fresh air regime was as restorative as its early adherents claimed but the space the school afforded for children’s personal development and, more prosaically but perhaps of greater practical impact, the clean environment and three square meals a day it provided were crucial.  Perhaps the cod liver oil, given at no charge on a daily basis to pupils who received free school meals, helped too. (6)

In 1939, there were 155 open-air schools across Britain, fifteen in London alone which educated around 2000 children.  The LCC also boasted a residential open-air school in Bushey Park which gave every year ‘some three thousand London schoolboys a spell of camp life’ and similar schools for girls in St Leonard’s and elsewhere.  Open-air classes in London’s parks were attended by 6000 children. (7)

After the Second World War, the welfare state – its health services and structures of social security currently under unprecedented attack – combined to make the work of the open-air schools less pressing.  The 1955 Clean Air Act also did much to reduce the atmospheric pollution that had blighted the lives of so many.

But Aspen House and the movement it represents aren’t of merely historic interest. Many of its principles went on to inform post-war education – both in terms of school design and pedagogy – and we jettison these values in a numbers-driven vision of educational quality at our peril.

My thanks to the staff of the Lambeth Archives for their help in accessing the primary sources noted above.