This is the second of four posts telling the story of council housing in Walsall.  Beyond any local interest, it reflects the dynamics of a wider national history of council housing.  That fuller story will be told in my forthcoming book Municipal Dreams: the Rise and Fall of Council Housing which will be published by Verso in April 2018.

As we saw in last week’s post, Walsall’s and the nation’s housing programme stalled in 1920 but the drive to provide decent working-class homes revived in the mid-1920s and in the 1930s was joined by a determined effort to address the slum conditions afflicting so many.  In both, Walsall took a prominent role though it was dominated by a Conservative-Liberal ‘anti-socialist’ alliance which outnumbered a growing but disunited Labour presence on the Council.

Neville Chamberlain’s 1923 Housing Act kick-started this process nationally but it was under the more generous 1924 Act passed by a short-lived Labour government that council housebuilding in Walsall took off.  In fact, the Borough built 4204 homes under the 1924 Act, a rate of housebuilding – at 40.8 homes per 1000 of its population – which placed it second among county boroughs only to Carlisle, ironically another council dominated by a self-declared anti-socialist alliance. (1) 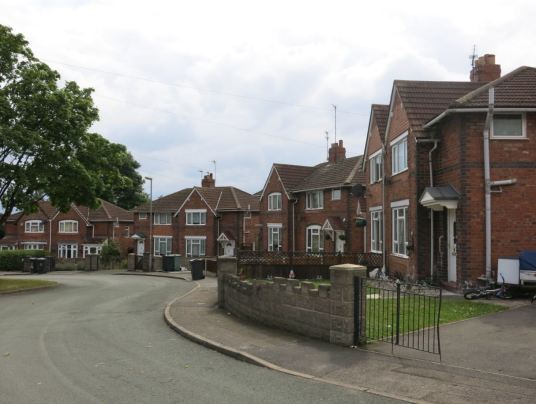 In January 1925, as the town’s housing shortage (blamed in the Council on the lack of skilled labour and building materials) became apparent once more, it was agreed to purchase land for housing purposes in Pleck.  Three months later the Council approved a large scheme of 1671 houses at a cost of over £750,000. (2)

By this time, cheaper non-parlour homes were preferred (parlour homes formed only 12 per cent of the new build compared to 40 per cent in the 1919 programme) but – at 98 per cent of the total – three-bed family homes dominated.  These early Walsall estates featured ‘a small range of standard designs, either semi-detached pairs or “triplets”’.  Their solid redbrick housing can be seen across Walsall, still providing good decent homes even if the purists will regret the replacement of their original wooden casement windows ‘by bland UPVC’. (3) 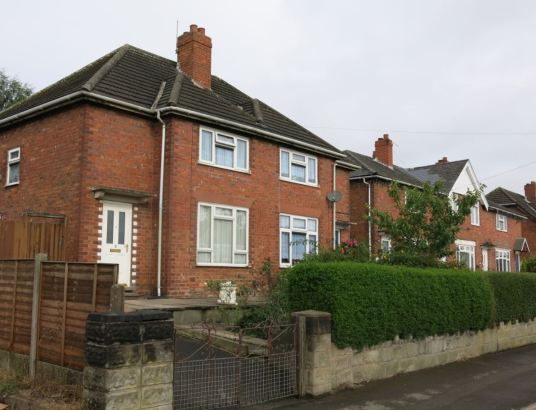 Homes on the Poets Estate, Harden

A second wave of construction under the 1924 Act began in 1930.  In April, the Council purchased a 91.5 acre site between Field Road and Blakenall, sufficient for 1000 homes and three months later, the Council voted, without division, to build 500 immediately. (4)  Despite this ambition and a rapid scale of construction (2417 houses were built in the five years to 1930), Walsall was running to stand still and its waiting list for homes had actually increased in the same period by 1500 to 3500. (5)

In the late summer of 1930, a new Housing Act – the product of another brief and minority Labour government – received the Royal Assent which instigated a new direction for the national housing programme. Arthur Greenwood’s legislation focused on the slums which continued to blight working-class lives in huge numbers by providing financial incentives for slum clearance and obliging local authorities to rehouse all those displaced. 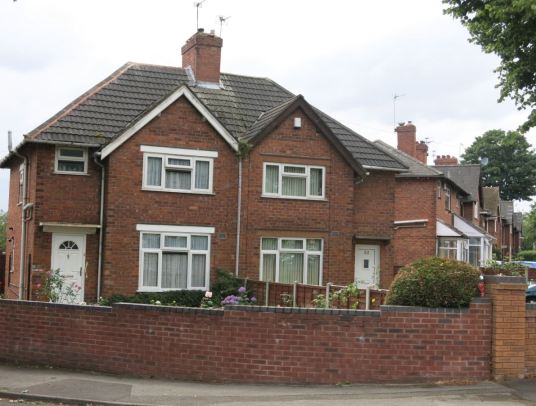 Walsall responded rapidly. A special joint meeting of the Council’s Housing and Health Committees in December 1930 proposed a £1.8m five-year building programme for 5000 houses – 4000 to meet ordinary needs and 1000 for slum clearance.  In the end, a still impressive scheme of 4000 new homes was agreed. The first ‘clearance area’ (an area of housing designated ‘insanitary’ under the terms of the 1930 Act) was declared at the same time.

Alderman Hucker, the Labour chair of the Health Committee, stated that the Council had spent £28,000 in last five years dealing with epidemics: (6)

He believed the slum clearance question had never been tackled before in the borough but under the 1930 Housing Act they were able to make a start to give the people better living conditions.

In larger towns, central slum clearance typically required its replacement by multi-storey flats (still no more than five or six storeys so long as lifts were deemed too costly for working-class homes) if housing densities were to be maintained and people kept close to their work. Walsall was small enough for the time being to escape this fate and was able, as one councillor urged, to rehouse ‘people in spaces where there was plenty of fresh air’. (7) 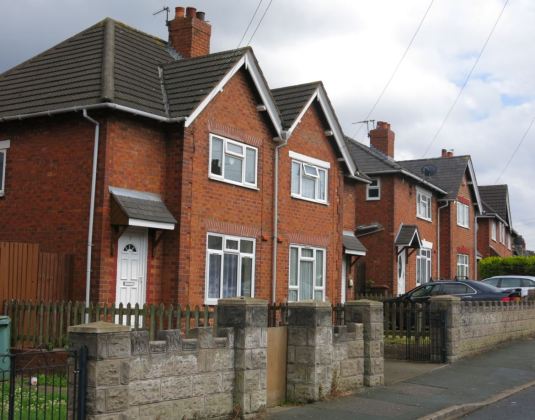 This time all the new homes were non-parlour but all were standard two-storey houses – yet again three-bed homes dominated – with the exception of the 344 one-bed bungalows constructed, reflecting the needs of elderly persons rather than the younger families to whom council housing had overwhelmingly catered for previously.

The Ministry of Health’s 1933 circular stipulating that henceforth all public housing subsidies were to be dedicated solely to schemes of slum clearance sharpened the Council’s focus.  By 1934, some 1159 houses were scheduled for demolition and some 5200 people rehoused. It represented one in twenty of the Borough’s total housing stock. 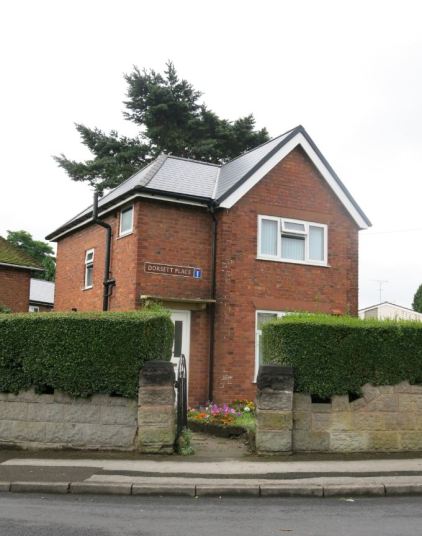 Despite this, the Council’s Chief Sanitary Inspector, CA Stansbury defended the Victorian ‘jerry-builder’ (and supplied the quotation marks).  The houses they built were apparently already being described as ‘desirable working class investment properties’ and practically all, in his view, were ‘readily capable of being kept in a fit state for human habitation at reasonable expense’.  In this, he might be seen as prescient, anticipating both the rehabilitation drive of the later 1960s and the more recent cachet of some of these once condemned older terraces.

He challenged some conventional wisdom, however – that which we’ve seen in Walsall and elsewhere which blamed the personal failings of slum dwellers for their living conditions: (8)

A new spirit is abroad, these folk are getting anxious to move, and, what is more important, are reacting to their improved conditions ; they are now fit to take their place as worthy citizens in our towns. It is amazing to see how some of them set about getting their new house and garden in order. It is then that one realises that this programme is worthwhile. There are black sheep, of course, but there is high hope for the future.

Under the National Government’s 1935 Housing Act, the attack on slum living acquired a new metric – overcrowding. All local authorities were required to survey local conditions and in Walsall it was revealed that almost five per cent of its 26,894 households were living in overcrowded conditions.  Surprisingly, some 519 families living in the town’s 5491 council homes were found to be overcrowded; at 9 per cent a rate of overcrowding which exceeded that in private homes (3.6 per cent).  The anomaly was blamed on the slightly smaller rooms of council housing though it might reflect too the prevalence of young and larger families living in council homes. A proposal to build 500 new homes of which 350 would be four- to five-bedroom was made to address the point. (9) 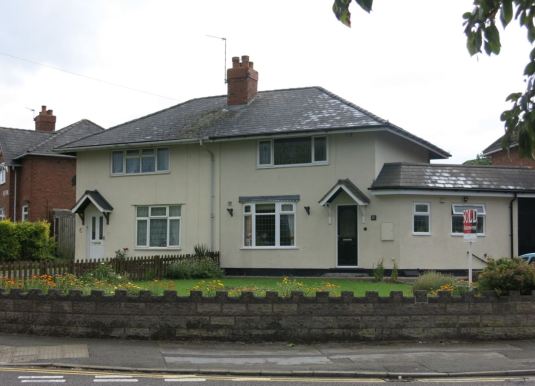 In March 1935, Walsall’s 5000th council home was opened – at 11 Walstead Road West in Delves Green.  This was part of an extensive building programme in the town’s southern suburbs – some 400 homes had been completed by the mid-thirties in Fulbrook and Delves Green; around 1000 in Palfrey.

In a clockwise direction, new large estates were developed to the west between Wolverhampton Road and Pleck Road and to the north, where Walsall proper merged into Bloxwich, Leamore, Harden and Goscote.

There was little rebuilding in the centre but further slum clearance was agreed in 1936 around St Matthew’s Church and, further north, around Coal Pool.  A new estate was built in the latter in the late 1930s. By 1937, it was reckoned that 107 clearance areas had been declared in the town and some 2262 houses represented as unfit. (10) But much remained to be done. Although almost 11,000 people had been rehoused, around 556 condemned homes were still in occupation. And when war broke out and new construction was halted, only 2664 houses of the 4000 planned in the 1930s had been built. (11) 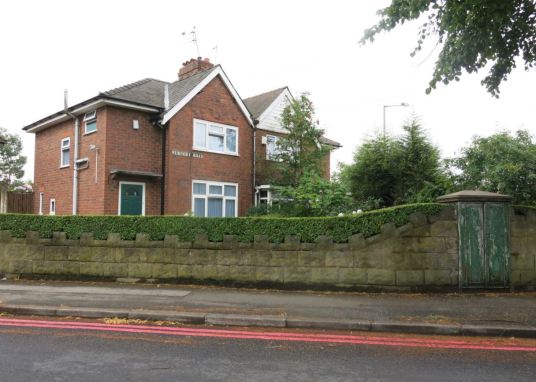 Nursery Road, Leamore. The distinctive garden walls seem to have been a feature of most of Walsall’s interwar housing.

During the war itself, despite its importance as an industrial centre, Walsall suffered relatively lightly from the Luftwaffe’s bombing raids. In 1944, it even acted as a safe haven for around 1500 evacuees from the V1 and V2 bombing raids in London. (12)  Nevertheless, lack of maintenance and the cessation of new construction created in Walsall, as elsewhere, an immediate housing crisis as the country turned towards peacetime reconstruction. 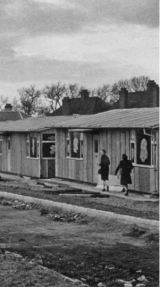 The 1944 Housing (Temporary Accommodation) Act committed £150 million to a programme of prefabricated homes and Walsall was allocated some 446 of the 156,623 two-bed bungalows that sprung up across the country.  The first was erected on Alumwell Road in September 1945. With a projected life-span of ten years, many in Walsall survived into the 1970s.

Despite that longevity, the prefabs were understood as a temporary fix. In 1945, the local housing waiting list stood at 5000 and thoughts had already turned to the creation of the modern, permanent homes that its people both needed and – with expectations raised – demanded.

The next post after Christmas looks at Walsall’s extensive building programme in the post-war era.  Much of this built on earlier achievements and forms but by the later 1950s multi-storey and high-rise solutions entered the mix too and a new chapter of council housing history took off.

My thanks to the Walsall Local History Centre and Archives for providing some of the sources used in this post.