Carlisle claimed to have built more council housing for its size than any town in England in the interwar period.  This was an anti-Socialist council, committed (in its own words) to ‘careful housekeeping’ but also to ‘good and progressive government for the city’.  That, in this period, meant building housing and the Council took pride in the quality as well as the quantity of the houses it built. (1) 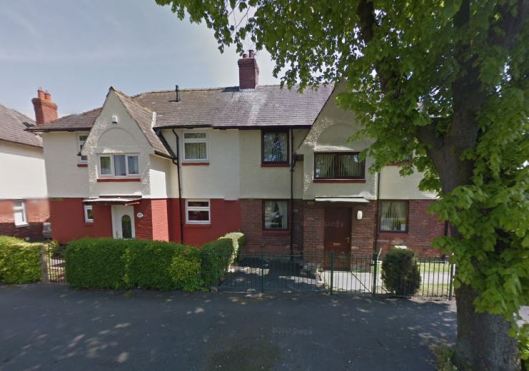 Before 1914, the Corporation had built just 40 council homes – tenements provided in connection with a 1900 clearance scheme.  In 1917, it committed to constructing 600 for immediate needs and planned another 1500 for those living in unfit housing.  The scale of need was unquestionable – almost 15 per cent of the city’s homes were back-to-back; over 10 per cent were one- or two-room tenements. (2)

When that survey of housing need took place, Carlisle’s population included an additional 3000 munitions workers employed at the nearby Gretna Green works.  They provide a fine illustration of the power and reach of the state in a time of total war – an overall workforce of 15,000 creating the weapons of war and, from July 1916, pubs and breweries in the district under state ownership – a wartime expedient to keep local munitions workers at work free from undue distraction that somehow survived through to 1971.

In this context, a more benevolent expression of state power – the construction of homes – and its embrace by a conservative council might surprise us less though, of course, it wasn’t universally welcomed.  One Carlisle councillor blamed the working class for the housing shortage as ‘they would not allow landlords to charge economic rents’.

Nevertheless, the Corporation acted quickly to acquire land for building in May 1919 for the Longsowerby Estate, a mile to the south-west of the city centre, and plans for 225 houses were submitted in 1920.  In the event, only 98 houses were completed under the Addison Act but the estate would grow to contain 330 homes before the next war.

A small start was also made on the Currock Estate, just to the east, in 1921 – 40 homes built under Addison but, with progressive extensions, reaching a total of 1234 by 1939.

Of the 308 houses completed by 1923, all had ‘fixed baths’ (when only one in five of the city’s homes did).  Over half also had parlours but the tide was turning against such perceived extravagance.  Percy Dalton, Carlisle’s City Surveyor, was anxious to build to high and contemporary ‘garden city’ standards, but he allowed himself a sardonic view of the respectable working-class’s desire for a front-room sanctum: (3)

Whilst feeling that the ideal house should have a parlour, which should be properly used, and not regarded as a museum for stuffed birds, or a handy place to store gramophones and bicycles in, it must be realised that a roomy living room is the first essential for the home.

Future schemes would largely do without therefore despite the complaint of the Labour councillor who thought that ‘the working class had as much right to a parlour as anyone’.

Dalton also pointed to an unusual innovation in the later homes – an external washhouse: the ‘advantage of this, in keeping all steam out of the house, will be easily realised’.    But he kept quiet about a less popular aspect of this adapatation – the fact that the WC was also accessed from the back door.  It was not technically an outside toilet as it remained part of the main fabric of the house but the inconvenience was widely resented. The Corporation made a small concession to complainants by providing an additional outside door where homes were next to bus stops!

For these reasons perhaps, Longsowerby remained the most prestigious of Carlisle’s council estates.  At the time of its building, some complained that middle-class employees were taking tenancies at the expense of the poorer working classes, a fact seemingly borne out by Jean Turnbull’s research which shows 12 per cent of heads of household on the Estate in 1936 were white-collar workers (compared to no more than five per cent on any of the other estates).

The small Wigton Road Estate, just to the west of the city centre, was begun under 1923 legislation but Carlisle’s building programme really took off after John Wheatley’s 1924 Housing Act under which the Council built more houses – at 45 per 1000 of its population – than any other county borough in the country. (4)

The Raffles Estate was begun on a 98 acre greenfield site in 1926 and – at over 1500 homes – would be the largest in the city by 1939.  Raffles has its own stories and story-tellers and we’ll look at the troubled history of the Estate in greater detail next week.

The Botcherby Estate – 544 houses on completion in 1933 – was built on 117 acres of land purchased in 1927 on the eastern periphery of Carlisle.  It soon became the most unpopular estate in the city mainly as a result of its inconvenient location.  Adversity bred a strong tenants’ association, active in the later 1930s in campaigning for improved bus services, better pedestrian access and local schools. 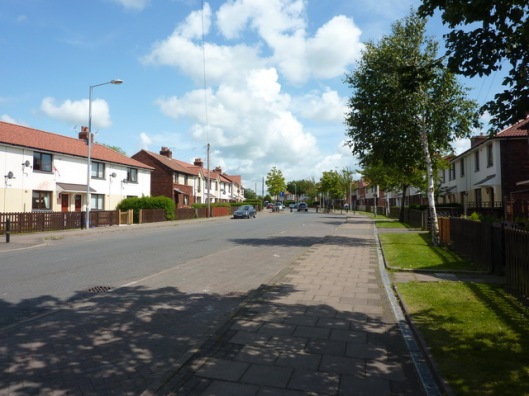 Holywell Crescent, the Botcherby Estate © Alexander P Kapp and made available under a Creative Commons licence

There were empty homes on the Estate at this time and requests for transfer to estates closer to the centre and employment on the western side of the city.  The small Fusehill Estate (renamed Vasey Crescent), built under the slum clearance legislation of 1930, was purposefully located close to the city centre. 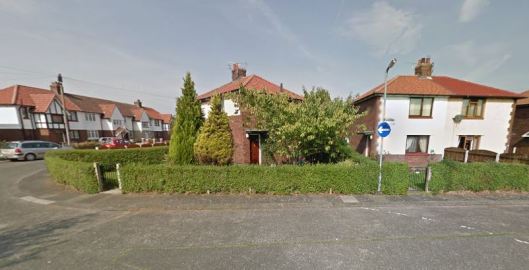 But Petterill Bank, designed for those displaced by slum clearance after 1935 was also located on the eastern fringe of Carlisle and similarly unpopular.  Perhaps because of its distance, it was the only estate provided with shopping facilities from the outset and it contained a larger number of four- and five-bedroom houses, in order to house larger families from the inner-city.

In fact, Carlisle’s efforts to clear the slums – particularly the notorious Caldewgate district of the city – had begun early, in the 1920s and it had rehoused 525 families before 1935.  At around 75 per cent of those displaced this was a creditable record but in general council housing remained disproportionately the prerogative of the better-off working class.

In Carlisle, in particular, a good many council tenants – 42 per cent – were employed on the railways. Railway workers, particularly those in the higher grades, were a labour aristocracy at the time and, as the industry was the city’s largest employer, the figure is not altogether surprising.  But it remains highly disproportionate – in 1919 only around 13 per cent of the local workforce worked in the industry.  One tenant later recalled that railway workers were ‘like freemasons’ and almost always got council housing if they wanted it.

Labour councillors may have kept quiet about that particular unfairness but they were quick to accuse the Council of favouritism in its allocation procedures in its alleged preference for those who could pay reliably over those in greatest need.  In 1931 – and we might savour this as a symbol of very different times – it was said some new tenants had previously been owner-occupiers and some had sold homes in order to move into council accommodation. 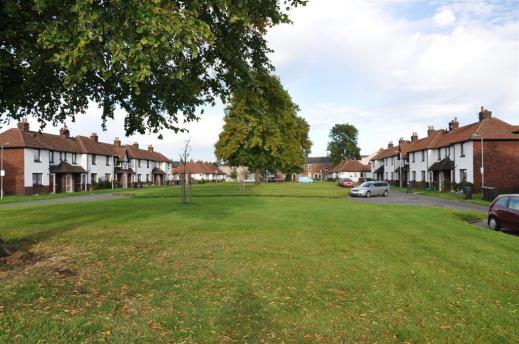 One other aspect of Carlisle’s interwar record deserves notice – the Council took justified pride in its housing for elderly people, particularly in the first and best of its purpose-built schemes, Margaret Creighton Gardens, opened in 1931.  Attractively designed and landscaped, the one-bed homes were also well-equipped and came at an all-inclusive rent of just 4s 4d a week.  One home in the development was allocated to a live-in nurse who enjoyed ‘free use of a telephone’.  It was a highly popular development and, to Percy Dalton, its ‘best recommendation’ was ‘the evident happiness and contentment of the old people’. (5)

The Corporation built 4702 houses in the interwar period and by 1939 around 27 per cent of occupied homes in Carlisle were Council-rented.  In the 1950s that proportion would reach 60 per cent and already some of the hopes and dreams of earlier years were a little faded. We’ll explore that story and the rise and fall of the Raffles Estate next week.

(1) Quoted in Jean Turnbull, ‘Housing Tenure and Social Structure: The Impact of Inter-War Housing Change on Carlisle, 1917-1939’, University of Lancaster PhD, 1991.  Other detail and analysis which follow are drawn from this very informative source.

(3) Percy Dalton, Deputy City Surveyor, ‘Some Aspects of Housing in Carlisle’, The Journal of the Royal Society for the Promotion of Health, November 1923; vol. 44, no. 11

(5) Percy Dalton, City Surveyor and Water Engineer, ‘Recent Improvements in Carlisle’, The Journal of the Royal Society for the Promotion of Health, February 1935; vol. 56, no. 2