The Cutteslowe Walls in Oxford – built by developers in 1934 to separate their private estate from council housing next door – were infamous: a symbol of a contemporarily class-ridden society but also sadly a prejudice towards residents of public housing that has survived their demolition in 1959. This week’s post looks at that story and takes a broader, more nuanced look at the housing politics of interwar Oxford.

The Cutteslowe Wall seen from Aldrich Road on the council estate

Oxford was one of the fastest growing industrial cities in Britain between the wars. That takes us some way away from our usual image of the ‘city of dreaming spires’ (though they were to pay their part in this history) but the statistics are stark. Oxford’s population grew by 88 percent – from around 57,000 in 1921 to (with a significant border extension to absorb growing suburbs) 107,000 in 1941.

This breakneck growth was largely due to the rise of the local motor industry and allied trades. William Morris built his first car – the doubly eponymous Morris Oxford – in 1913; his workforce grew from 200 in 1919 to around 5000 from the mid-1920s. Pressed Steel, founded in 1926, employed similar numbers. The new trades provided almost a third of local jobs by the late 1930s when almost half Oxford’s insured male workforce were immigrants to the town, many from the local region but a significant number from the unemployment blackspot of south Wales. (1)

This would affect the city’s politics in due course but it did so only slowly; for the time being the old order reigned. Oxford was a reformed corporation dating to 1835, a county borough from 1889, but its council retained university representation (nine councillors – three elected by convocation and six by college heads and senior bursars – and three aldermen) which persisted, incredibly, to 1974.

That said, it’s not clear that this affected the fundamentally conservative nature of the council: ‘Between 1918 and 1939 the distinction between Liberals and Conservatives on the council was said to have become almost nominal’. Against this, Labour representation – the first member in 1918, rising to 13 by 1939 in a council of 68 members – had little impact. (2)

Despite the depth of housing need and the prevalence of inner-city slum housing (St Ebbes was described as ‘a swamp converted into a cesspool’ as early as 1848), the Corporation was largely passive: (3)

Before 1914 undiluted laissez-faire predominated on Oxford City Council, in the field of housing as in other municipal activity. The council was notoriously unwilling to enforce sanitary improvements and impose building controls, and made almost no use of national legislation to deal with the worst unfit housing.

The First World War changed much, particularly in the field of housing. The first council homes in Oxford were actually built by Headington Rural District Council in 1920: 101 in total on London Road and Barton Road, designed by local architect James Wells and described by the Oxford Times as of ‘smart appearance, with their whitewashed fronts and red tiled roofs’. (Headington became an Urban District in 1927 but was incorporated into Oxford proper in 1929.) (4) 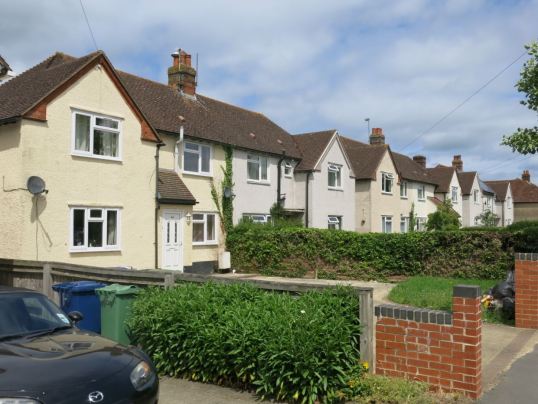 But Oxford City Council could no longer afford to ignore local needs and national pressures though it did continue to follow its own path. In response to national directives leading to the 1919 Housing Act, the Council initially proposed to build 400 homes; in the event just 215 were completed by 1922.

These first estates were built at the fringes of the city on Iffley Road and Cowley Road, of high quality and architect-designed with ‘steeply gabled roofs and careful Arts and Crafts detailing [showing] a strong debt to the work of Parker and Unwin at Letchworth Garden City and Hampstead Garden Suburb’. Their rents, though, were among the highest in the country as, perversely, the Council rejected Treasury funding, preferring to finance the schemes from its housing revenue account. (5)

It relented in 1924 when it acquired powers to borrow but the high standards remained as did the high rents. The latter were, apparently, a deliberate choice, intended to confine council homes to the better-off and more ‘respectable’ working class and allowing the worse-off to move from city slums to the slightly superior homes vacated by the new council tenants – the ‘filtering-up’ theory which was influential before the First World War.

An early view of the South Park Estate

The new, generously-sized, neo-Georgian-style homes were designed by Kellett Ablett who joined the City Engineer’s Department in 1925. (He went on to become Chief Housing Architect for Nottingham City Council and Chief Architect to Hemel Hempstead New Town.)  The South Park Estate and Morrell Avenue in particular, built between 1929 and 1931 on Headington Hill, is the showpiece, built on land formerly owned by the locally prominent brewing family; ‘as good as any of this kind built in England at the time’, according to Geoffrey Tyack.

An early image of Morrell Avenue

That quality is first apparent in the streetscape – a curving, tree-lined road with verges separating road and footpath. It’s seen in the semi-detached and terraced homes in their brick banding, clay tiling and classical pilastered doorcases amongst other careful detailing.  Similar homes of the same quality and design can be found in the earlier housing of the nearby Gipsy Lane Estate. 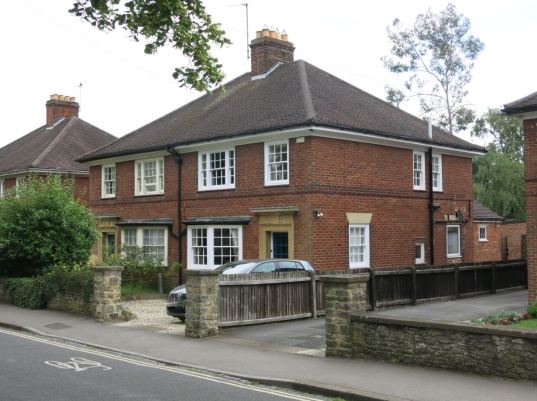 After a slow start, the Council had built 1647 homes between 1923 and 1930, its room for manoeuvre hampered by the city’s growth and pressure on land and the reluctance of Oxford colleges to sell land for public housing. The problem of slum housing – only 129 houses had been demolished by 1929 – and the rehousing of its residents remained, however.

1930 – the year of the Greenwood Housing Act targeting slum clearance – marked a sharp turn nationally and locally. By 1939, the Council had cleared 872 slum houses, most of them in St Ebbes and there were plans for the demolition of almost another 600 St Ebbes’ homes and their replacement by working-class flats. 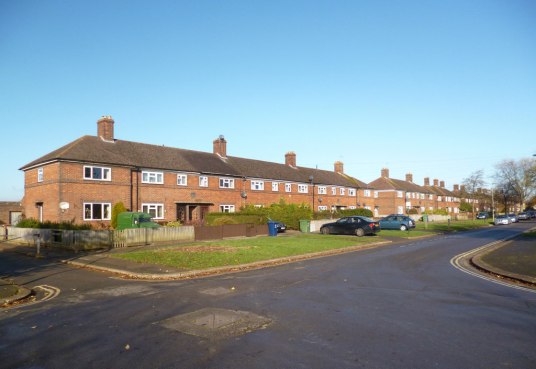 Croft Road, New Marston. The houses bear a plaque marking their date of construction, 1935 © Des Blenkinsopp and made available through a Creative Commons licence

The Council built several hundred more council homes in the 1930s (others were acquired through the expansion of its borders), principally on new estates in a constellation around the city fringes: Wolvercote to the north, New Hinksey to the south, and New Marston to the east.

Some were built to previously high standards, as seen above in the plans and finished housing on Abingdon Road but most, while solid, decent homes were notably plainer and smaller than their predecessors. This reflected the changing and less generous subsidy regime over the interwar period and a belief that the so-called slum working class might be housed more cheaply.  The contrast can also be seen clearly in the later housing built on the Gipsy Lane Estate.

That prejudice lay behind one of the great causes célèbres of interwar Oxford – the Cutteslowe Walls.  The Council had bought agricultural land for housing in Summertown in the 1920s. The first Cutteslowe Estate was built between 1931 and 1932. Work on the second began in August 1933. Meanwhile, the city had sold part of the land to private developers, the Urban Housing Company.  Through some apparent miscommunication, Aldrich and Wolsey Roads on the new council estate joined up with their private estate counterparts. (7)

The Company alleged council tenants were responsible for vandalism on the private estate. It also claimed that the rehousing of former slum-dwellers on the estate breached an undertaking given by the Council that it wouldn’t be used for this purpose. Whatever the (not so) niceties, it’s not hard to see the naked class prejudice and commercial interest that lay behind the Company’s supposed grievances. It erected two-metre high, spiked walls – separating the council homes from their private equivalents – across the connecting streets in December 1934. They forced a 600-metre detour for council estate residents trying to reach the main road.

This local class war provided an obvious opportunity for the city’s Communists led by Abe Lazarus but the Party’s attempt to lead local residents in the demolition of the walls in May 1935 was thwarted by the police and, in the words of another Oxford communist, the capitulation of ‘certain legalist members of the [tenants’] committee’. (8)

In this fight, however, the City Council was on the right side of history.  They wanted the walls down and, having pursued various legal avenues, they ended up taking what turned out to be their own form of direct action in June 1938 when Council workmen bulldozed both walls. A back and forth ensued between the workmen of both parties while Urban Estate residents looked on with some concern, as reported by the Daily Herald: (9)

‘We don’t despise these people’ said a Carlton-road dweller, ‘but …’ – and a finger was pointed at three cheerful urchins climbing a tree.

‘It is not that we look down on them’, said another, ‘but we live a different life from theirs’.

The High Court found the Council to have acted unlawfully and the walls were duly reinstated. And amazingly there they remained, despite a few mishaps, until demolished on 9 March 1959 – a sign of changing times perhaps but achieved by the legal manoeuvre of the Council buying the land on which they stood.

Class divides were not always so clear-cut. Oxford City Council had built over 2000 houses since the war; private developers around 7000.  We’ve seen an intra-class division operating within council housing – between the superior housing designed for a more ‘respectable’ working class in the 1920s and that provided for displaced slum-dwellers in the 1930s. Some of the new private housing would have been occupied by a more affluent working class too, notably the relatively well-paid car workers.

I’ve written previously about a similar wall erected on the Downham Estate, south London, which stood between 1926 and 1950.

Surprisingly, the class divide reared its ugly head again in Oxford in 2018 when the City Council repaved ‘posh’ Wentworth Road and halted its resurfacing as it became Aldrich Road on the council estate at precisely the point where the wall had previously stood. At least one local saw this as ‘Class War’ and expressed the view in spray paint. The Council claimed it was a purely pragmatic decision based on need.

There’s been a fair amount written on the Cutteslowe Walls, notably Peter Collison, The Cutteslowe Walls: A Study in Social Class (Faber and Faber, 1963). Apart from the sources listed below, the Past Tense blog provides an interesting perspective in this post: Class Walls – Cutteslowe, Downham and roadworks.

Much of the detail on individual estates in Headington is drawn from the well-researched and informative local history website, Headington History and this page on the area’s newer estates.

(2) CJ Day, Modern Oxford: a History of the City from 1771 (Reprinted from the Victoria County History of Oxford by Oxford County Libraries, 1983)

(5) The quotation is from Geoffrey Tyack, Oxford: An Architectural Guide (Oxford University Press, 1998); the reference to funding from Crosby, ‘Housing and Urban Renewal: Oxford 1918-1985’

(7) Much of the detail here is drawn from Brian Robert Marshall, Cutteslowe Walls

(8) Duncan Bowie, Reform and Revolt in the City of Dreaming Spires (University of Westminster Press, 2018)

4 thoughts on “Council Housing in Oxford, Part I: ‘‘We don’t despise these people but …’”