Between the wars, Conservative-controlled Birmingham built over 51,000 new council homes – more than any other local authority in the country outside London.  When Neville Chamberlain, a former city councillor and now Edgbaston MP, opened the city’s 40,000th council home in 1933 he spoke with much local pride and only a little exaggeration of:(1)

While Chamberlain might seem the quintessential interwar Conservative, his name and local heritage stood for something more.  Before his father Joseph Chamberlain, a dominating figure both as local councillor and MP, became a Unionist, he was a radical.  His influence, that mix, remained powerful in Birmingham.  Neville, his more pallid son, represented some of its good intent and many of its contradictions. 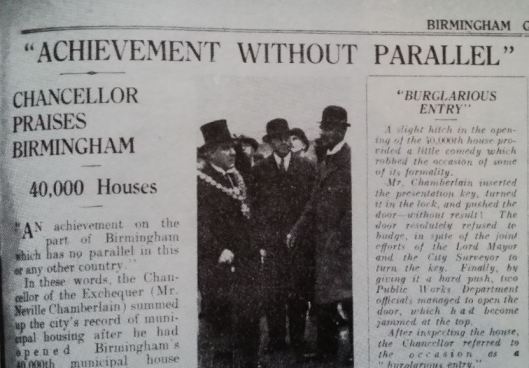 In fact, Birmingham’s record of municipal house-building before 1914 under Joseph’s influence had been dilatory.  The crowded slums of its inner-city remained – and would remain – among the worst in the country.  But in 1919 the combination of a reforming city council and a national commitment to reward wartime sacrifice created an unprecedented drive to build

A survey undertaken under the 1919 Addison Act estimated that 14,500 new homes were needed within three years – an enormous figure though a modest one given that Birmingham’s so-called Inner Ring still contained some 40,000 back-to-backs and 200,000 people living in unfit accommodation.

The Council planned to build 10,000 within three years.  In the event, only 3234 houses were built under the 1919 Act – around 92 per cent of them the superior 3B type with parlour, living room, scullery and three bedrooms.   The first homes occupied, in 1919, were in Cotterill’s Lane, Alum Rock. (2) 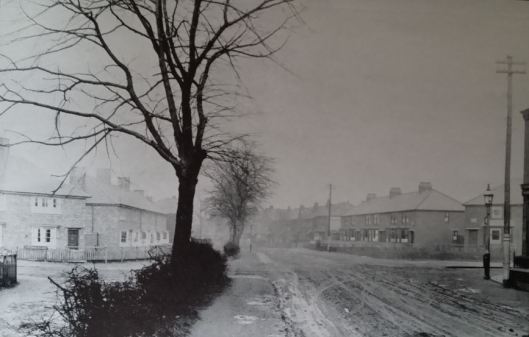 This relatively modest figure – though not uncommon in a period of severe difficulties for the building trades – prompted a Special Inquiry into the Housing Committee in 1922, critical of inexperienced officials and the Public Works Committee. 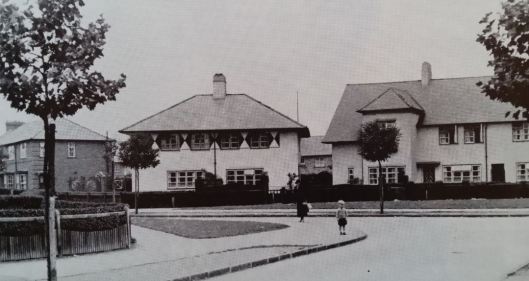 Responsibility for building was transferred to a new Public Works and Town Planning Committee whilst the Estates Department was placed in charge of managing the new estates which had sprung up across the suburbs of Birmingham in Birchfield, Bordesley Green, Bournville, California, Erdington, Gospel Oak, King’s Heath, Little Bromwich, Quinton, Short Heath, Stechford, and Warstock. 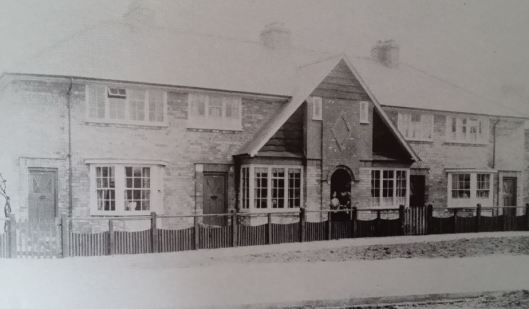 The Batchelor’s Farm Estate in Bordesley Green was one of the earliest large estates completed – with a total of 1360 houses – and, at three miles’ distance, one of the closest to the city centre, its design typifying the garden suburb ideals of the day. 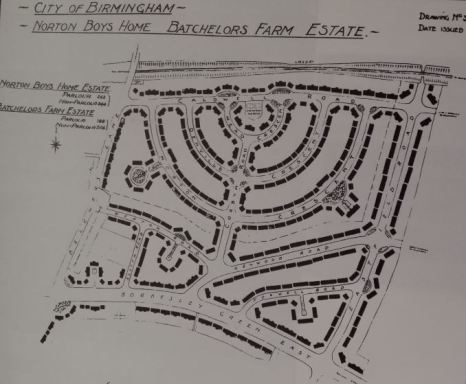 Ironically, only 3433 municipal homes were completed under Neville Chamberlain’s own 1923 Housing Act.  Birmingham’s Conservative council shared Chamberlain’s faith in private enterprise and went so far as to implement its own generously subsidised mortgage scheme, aided paradoxically by the fact that Birmingham, uniquely, possessed its own Municipal Bank (founded by Chamberlain in 1916).  By 1929, when the subsidy was discontinued, £1m had been loaned to buyers of 3314 houses but, with average repayments inclusive of rates reaching almost £1 a week, the scheme did very little for the ordinary working-class inhabitants of Birmingham, let alone the poorer slum dwellers.

It was under Labour’s 1924 Act that municipal house-building took off in the city. By 1926, with 13,000 council homes completed, Birmingham had become the largest municipal housing provider in the country outside London.  Altogether, it would – by 1933 when the scheme was ended – build 33,612 houses under the Wheatley Act. 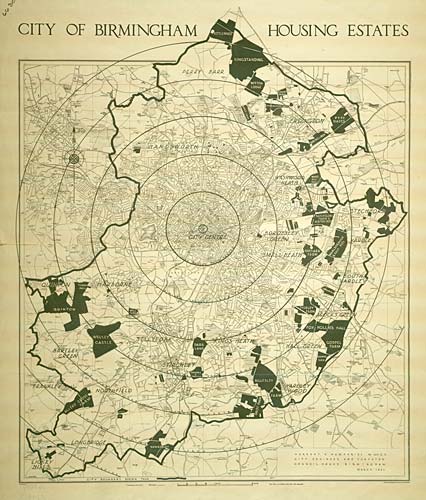 A 1931 map of Birmingham’s council estates

Nearly all those homes were built on Birmingham’s periphery, the City’s efforts being focused on new cottage suburbs in green-field sites.  The strength of this commitment was demonstrated in 1928 when the City incorporated 3000 acres of predominantly agricultural land in Perry Barr on its northern borders. 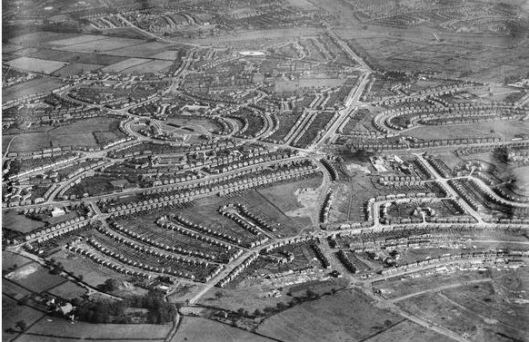 This area would over the next decade come to comprise an almost unbroken series of new municipal estates in Kingstanding, Kettlehouse, Witton Lodge Farm and Oscott College – almost 10,000 homes with a population the size of Shrewsbury. 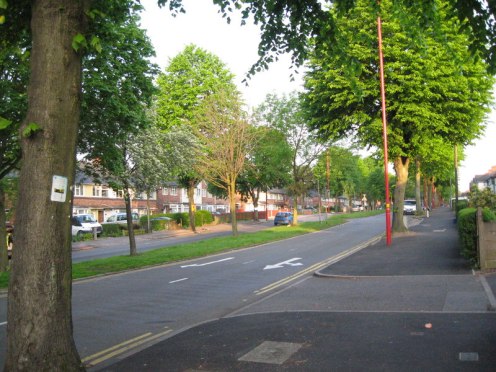 Another land grab – as suspicious neighbouring authorities no doubt saw it – occurred in 1931 with the acquisition of 4466 acres to the east in Sheldon, Warwickshire.   By 1939, the Lea Hall Estate here comprised 3500 council homes. 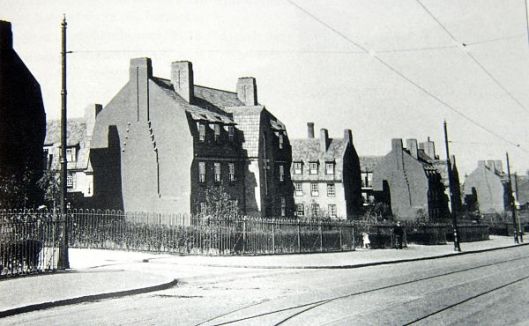 The Holmes Estate on Garrison Lane, built in the late 1920s – an early interwar flatted scheme

As yet, very little had been done to tackle the scourge of the inner-city back-to-backs and courts.  There had been small-scale experiments with multi-storey schemes near the centre but the scale of the problem was daunting and, it was said, the ‘Birmingham prejudice against flats’ remained.

But pressure for action was gathering.  The continuing squalor of inner-city conditions grew more intolerable as expectations rose.  The need to clear the slums and redevelop at density this inner core seemed undeniable.  And it was understood that, so long as local wages remained low and living costs on suburban estates high, cheaper housing in the centre was essential for those displaced from the slums.

Greenwood’s 1930 Housing Act represented the first concerted attempt to clear the slums and rehouse their population.  The year would also mark the peak of Birmingham’s house-building efforts in the interwar period – 6715 homes completed.  Greenwood himself formally opened the City’s 30,000th council home in (the Conservative council giving due deference to the Labour Minister for Housing) Greenwood Place, Kingstanding. 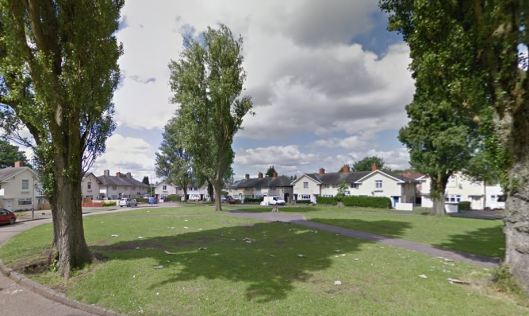 In response to the Act, Birmingham informed Greenwood’s Ministry that it planned to build 30,000 homes over next five years.  For the first time, 7000 of these were specifically to target slum clearance and rehousing.

In practice, little was achieved before 1939 but the sweeping changes of the post-war era were anticipated.  In 1935 Herbert Manzoni was appointed City Engineer and Surveyor.  He would become a controversial figure but his vision, energy and impact are unquestionable.  It was Manzoni who would push for what was planned in 1937 as the most extensive redevelopment scheme in England – the clearance and rebuilding of 267 acres of inner-city Duddeston and Nechells.

to bring back an obsolete district to a high standard…can only be achieved if the whole layout is changed with the proper zoning, and all the amenities of a new and up-to-date development; to rebuild a few groups of houses in an already dingy setting will never do this – the whole area must be new and it must look completely different.

This was a strong anticipation of much wartime and post-war planning wisdom (epitomised in the various plans proposed by Patrick Abercrombie) and a clear marker for the new Birmingham.

Earlier, the 1935 Housing Act had identified the need to tackle overcrowding as major thrust and measure of rebuilding efforts.  In a survey which followed, Birmingham assessed that 13.5 per cent of the city’s population were living in overcrowded conditions (an underestimate given the laxity of the legislative definition).  Most of these, of course, were living in the congested Inner Ring. 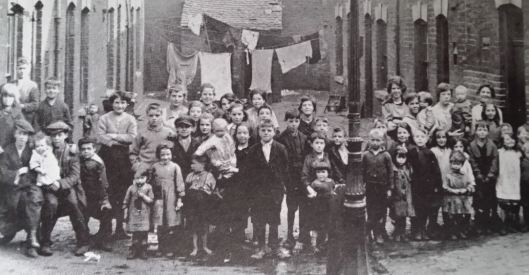 In 1938 a joint report from the Estates and Public Works Committees estimated 37,000 new homes were needed to meet the city’s needs.  It planned to build 25,000 in the next five years;  of these, 15,000 were to be flats or maisonettes.  The Birmingham love affair with the cottage suburb was well and truly over.

The Second World War would derail these immediate plans but it would reinforce their thrust and help create – for good or ill – a new Birmingham which we will examine in future posts.  In the meantime, next week we’ll take a closer look at the form and politics of the city’s new interwar estates and we’ll see how the Chamberlain grip on Birmingham was loosening.

(2) Carl Chinn, Homes for the People. 100 Years of Council Housing in Birmingham (1991).  Much of the detail which follows is also drawn from this source.