Maybe it’s the funny name but people don’t think of Tooting as being somewhere to find extraordinary social history. And, to be fair, most people now would give the Totterdown Fields Estate only a passing glance – just another pleasant but somewhat anonymous early council estate at first sight.

But the Totterdown Fields Estate is special – deserving of our attention not only as the first municipal ‘garden estate’ and the forerunner of many which followed but impressive both for its design and architecture and the vision which underlay them.

The origins of the Estate lie in a combination of events and currents. The London County Council (LCC) was formed in 1889 and enjoyed – until 1907 – a solid Progressive majority. The 1890 Housing of the Working Classes Act empowered the LCC not only to clear slums but to replace them.

Two years later,  the LCC’s Architects’ Department established a new group dedicated to the ‘Housing of the Working Classes’. Its idealistic members, ‘excited by the socialist philosophy of William Morris and its architectural expression in the buildings of Philip Webb and the teaching of WR Lethaby’, became ‘a breeding ground for architectural design of a peculiarly rational and elegant kind.’

Morris is well-known but Lethaby is a complex figure.  He is seen in some respects as an early functionalist – he once famously said that a ‘house should be as efficient as a bicycle’.  But his belief in ‘good honest building’ and respect for its craft and appearance ensured a visually attractive and decorative quality to his designs.

One more date: in 1898 Ebenezer Howard launched the garden city movement with the publication of Tomorrow: a Peaceful Path to Real Reform. The Garden City Association was formed two years later. (OK, that’s two dates if you’re counting.)  These were vital influences on much of the ‘garden suburb’ council house building of the interwar period.

Before that, however, came Totterdown Fields. The LCC’s first housing development had been the Boundary Estate in Shoreditch (which I’ll cover in a future posting) but that was a tenement scheme.  LCC planners were keen to develop a cottage estate. A 39 acre site south-west of Tooting Common was identified and purchased in 1900 for £44,238.

Benefitting from a new LCC tramline reaching to the Embankment, the site was well placed to cater for working men who could afford the 3d tram fare to get to work in central London.  (The Northern Line extension would arrive in 1926 and offer additional transport connections.)

Plans were drawn up to construct 1,244 cottages in four different classes: from ‘first’ with five rooms to ‘fourth’ which comprised ground floor and first floor flats, each with three rooms.  A five room cottage with bathroom and scullery on the estate would rent at 12/6 (62.5p); the cheapest three room flats at 6/0 (30p) – rates that excluded the unskilled or irregularly employed.

In the event, the finished estate in 1911 comprised 1,229 cottages for a population of 8788 people.  Four shops were built.  (The lack of retail and community facilities and the absence of in situ employment distinguishes the ‘garden suburbs’ from Howard’s self-sufficient garden city ideal.) 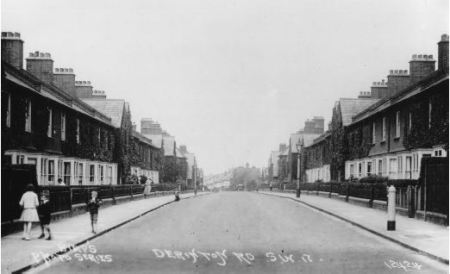 Each cottage had a living-room; a kitchen with dresser, food cupboard and plate rack; and a scullery containing sink, copper (for washing clothes), coal bunker and, in many cases, a gas oven.  Bedrooms were supplied with wardrobes.  Many – but not all – of the cottages had baths.

Economy was a necessary watchword and was achieved through the cottages’ narrow frontages and small – 5 to 15 feet – setback from the roadways. The cottages were constructed in two-storey terraces of up to 20 units, 12 to 20 feet apart.

Nevertheless, despite these financial constraints, one contemporary commentator observed:

it is a matter for congratulation that the architectural design is pleasing and varied, and though necessarily simple, in no way commonplace, but in strong contrast to the usual type of building erected for the working classes.

The plan was a simple one – a basic grid but gently curved and with existing trees retained wherever possible and new plane trees planted to line the main thoroughfares.  Each cottage possessed front and back gardens, small but civilising.

Housing density – at 31.8 per acre – was quite high (Port Sunlight, a model for the early garden estates, had just 8 cottages per acre) but the Estate’s planners had – by necessity and choice – to steer ‘a middle course between their own well-tried and practical vernacular style and the picturesque conceits of the model villages.’

The particular delight of the Totterdown Fields Estate, however, lies in its detail. Its principal architect was Owen Fleming who, choosing on principle to live in a working-class tenement in Stepney Green, understood better than most the hard lives of the poor and believed passionately in their right to comfortable and attractive housing. 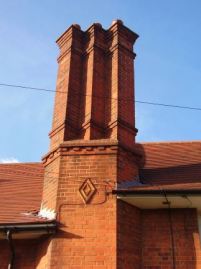 The conservationists can put this better than I can (the Estate was designated a Conservation Area in 1978) but the skill of Fleming’s design lies in both its variety and homogeneity. Arts and Craft features – heavy gables, tall Tudor-style chimneys, single and double storey bay windows, a range of door styles and porch designs – are widely employed but all in the service of a broader and coherent vision.

Specific features gave different groups of cottages distinctive identities but the detailing overall, deployed throughout the estate in varying combinations, provided unity and cohesiveness to its appearance.

As Susan Beattie has written, within tight constraints but with genuine vision and an applied idealism, Owen Fleming and the LCC’s Housing of the Working Classes group:

created a modified form of garden city that introduced thousands of working class people to a new style of life that is no less remarkable a contribution to the movement for largely having gone unrecognised within it.

This was, in a sense, ‘Freedom for Tooting’ and the respectable worthies and earnest professionals of the LCC achieved more for working people than the Tooting Popular Front ever did or ever could.

Most quotations are taken from Susan Beattie, A Revolution in London Housing: LCC housing architects and their work, 1893-1914 – the best overall guide to the Estate and its architects.

Wandsworth Council, Totterdown Fields Conservation Area Appraisal and Management Strategy. Most of the images above are taken from this source.

17 thoughts on “The Totterdown Fields Estate, Tooting: ‘Architectural design of a peculiarly rational and elegant kind’”