In the sixties, London was swinging and Harold Wilson had promised a new Britain forged in the ‘white heat’ of a technological revolution.  That may have been hype but something of it resonates when you look at Camden’s Alexandra and Ainsworth Estate – Alexandra Road or even Rowley Way to its friends.  There was hope in the air and Camden was well placed to capture it.

The Metropolitan Borough of Camden was formed in 1964 and comprised the former boroughs of Hampstead, Holborn and St Pancras – respectively intellectual, wealthy and radical. It was also the third richest borough in London in terms of rateable value.(1)  Add the politics of a young  and ambitious Labour council, for whom ‘the main aim was more housing – beginning and end’ and conscious of its flagship role, and that made for some of the most exciting council housing of modern times.(2)

The Council found in Sydney Cook, Borough Architect, and the team he recruited people with the vision and ideological drive to match its ambitions.  Cook rejected the system-building then in vogue as the means to build as much as cheaply as possible – ‘I’ll use standardised plans if you can find me a standardised site,’ he said.(3)  And he rejected high-rise, particularly the tower blocks set in open landscape popular at the time.

In Neave Brown, the architect of Alexandra Road, he found an ally. Brown wanted to: (4)

build low, to fill the site, to geometrically define open space, to integrate.  And to return to housing the traditional quality of continuous background stuff, anonymous, cellular, repetitive, that has always been its virtue.

For non-architects, this was a call to return to the traditional values of terraced housing – not necessarily working-class housing, the Royal Crescent in Bath was another role model – in which each dwelling had a front door to the street and its own open space with a view of the sky.

Alexandra Road in its heyday

Before the development, Alexandra Road was an area of some 600 decaying Victorian villas, scheduled for demolition.  Residents mounted fierce opposition to a commercial redevelopment plan which projected three fourteen-storey high tower blocks.  The developer  withdrew and the Council purchased the 13.5 acres for social housing purposes in 1966.

The basic design of the finished estate was determined in 1968 but met resolute opposition from Camden’s Planning Department which believed a low-rise development could not achieve the population density required.  The policy brief stipulated 136 persons per acre, Planning asked for 150, Brown won the day by promising 210 – a figure higher than most high-rise schemes achieve.

The Council (under Conservative control from 1968 to 1971) approved the scheme in April 1969 and planning permission was granted the following year.  One last hurdle was overcome when a 1972 public enquiry approved the pedestrianisation of the road against objections from Westminster residents.

A final budget was set at £7.15m.  Building began in 1972, the first residents moved in in 1978 and the estate as a whole was completed in 1979.  But not before myriad difficulties involving the 175 contractors, a layer of soft clay causing huge problems with foundations and a massive burst water main.  Construction costs were also raised by the shortages of materials and labour.  The overall price of the scheme ballooned to £20.9m – though this did include significant additional works in the provision of a youth club and play centre, for example.

Not surprisingly, the eventual expense of the development and its high maintenance costs were widely criticised. Ken Livingstone, who became chair of Camden’s Housing Committee in 1978 and no friend to those now regarded as Camden Labour’s old guard, set up a public enquiry to investigate.  It criticised the Council’s project management procedures.  Others blamed excessive architects’ fees.  A less blameworthy factor is simply the quality and ambition of the estate’s design.

Architect’s drawing of the estate

There are excellent architectural descriptions of the estate which I won’t attempt to match here but in brief it comprises two parallel pedestrianised streets and three, 300 metre-long, terraces.  The largest of these, seven storeys high, backs on to the West Coast mainline, and is built ziggurat-style, high at the rear, to block the noise of passing trains.

The rear of the seven-storey Rowley Way block

Two other four-storey blocks, run parallel, and between them is a four acre park. 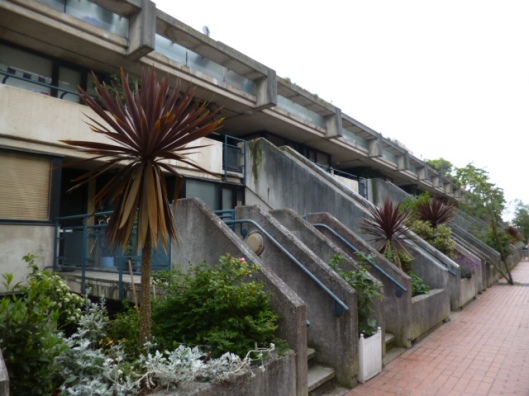 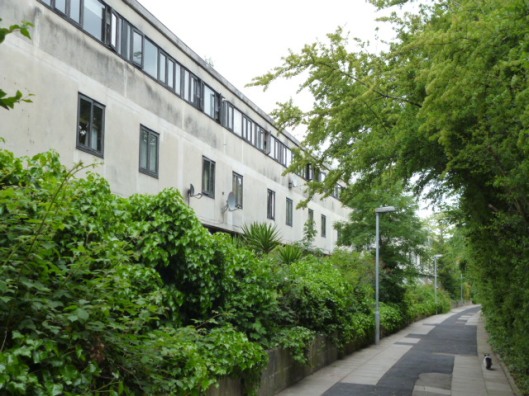 Ainsworth Way: the rear of the four-storey block skirting the park

The estate as a whole is constructed of site-cast board-marked white, unpainted reinforced concrete with black-stained timber joinery.  But any starkness here was to be offset by profuse greenery and the estate has managed this pretty well, leading one critic to describe Alexandra Road – he argued the vegetation was being used to hide the architects’ mistakes – as the ‘hanging gardens of Camden’.(5)

Internally, the two-storey dwellings have bedrooms on the lower floor and living rooms on the upper. Each living room has an external balcony with fully glazed sliding doors.  Sliding walls allow the interior space to be subdivided.

In all, 520 dwellings were provided, housing some 1660 people.  Now the key question.  Beyond the architectural hype, what has been the experience of the estate’s residents? 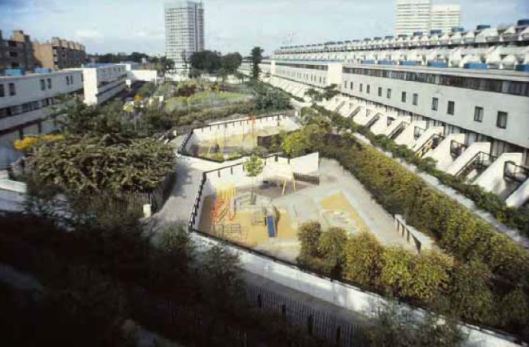 To begin with, it was positive.  The Council feared the estate would be unpopular but 137 of the first 278 prospective tenants accepted tenancies and they were said to be impressed by the ceramic-tiled kitchens, huge picture windows and sliding wall partitions – and by the central heating hidden inside the walls.  Some dubbed it the Costa del Alexandra and one early resident at least didn’t begrudge her £23.50 a week rent – ‘It’s just like being on the Riviera’, she said.(6)

As severe teething problems developed, chiefly with the heating system, that comment came to seem ironic.  Each heated wall served two flats and residents complained about extremes of heat.  One particularly vituperative article in the Camden Tenant was headlined ‘How to rent a sauna bath and a freezer at the same time’.  It went on to complain about crumbling concrete, railway noise and insect infestation and concluded ‘all in all, this estate represents a disaster of the first magnitude and I for one will be moving.'(7)

The heating problems were admitted and hard to fix with the Council eventually agreeing to pay half the affected tenants’ heating bills till the matter was resolved.  The difficulties with concrete in the British climate are more intractable and were exacerbated in the 1980s by the Council’s poor maintenance of what was always understood as a construction that would need some looking after.  Current views of the concrete are mixed, ranging from ‘I think it’s quite brave and brutal’ to ‘it just looks dull’.(8)

Some weathered concrete on an unforgiving grey day

By the late eighties, the estate had also come to be viewed as unsafe – the incidence of both reported and unreported crime said to be significantly higher than in surrounding streets and estates.  A contemporary survey placed blame on the ‘complex design and layout of the estate’.  But, in hindsight, it seems as realistic to look at wider social problems as any particular issues with the estate itself.(9)

In 1989 tenant disgruntlement with Camden’s management led to their vote to place the day-to-day management of the estate in the hands of the South Hampstead Housing Cooperative.  An £8m refurbishment project was awarded to a firm of private architects.  In the event, the contract was taken over by the Council and completed by in-house architects and the estate as a whole returned to Council management in 2005. 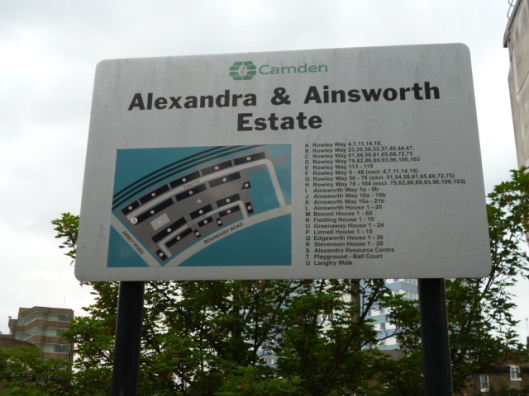 In 1994, well before the thirty years normally required before a building may be listed, the estate was listed Grade II* to ensure any refurbishment matched original specifications.  It was described by Peter Brooke, then Heritage Secretary, as ‘one of the most distinguished groups of buildings in England since the Second World War’.

Architecturally, despite the weathering, the estate remains impressive – a worthy site of pilgrimage for students of modern architecture, some of whom wax lyrical. For the modernist architect John Winter:(9)

Between the system building spree of the sixties and the late seventies slide into folksiness there was a magical moment for English housing when eminently habitable places of clarity and calm were designed and built…Camden has contributed richly to this scene.

Residents’ views remain mixed.  Some liken it to Alcatraz.  One resident describes it more imaginatively as ‘an enormous concrete crocodile that has been in an accident’.  On the other hand, there’s the resident who claims, with a little poetic licence, that they ‘live in a penthouse apartment in a Grade II-listed building in St Johns Wood’.(10)  For others, it is simply home and it is described overwhelmingly as a friendly, neighbourly estate.

Keeping our feet on the ground, it’s hard not to admire the enterprise and idealism of those responsible for Alexandra Road.  It couldn’t happen now and according to Neave Brown it only happened then because of:(11)

the youthfulness and energy of the people involved, and also because the various figures of authority in the Council were relatively young and inexperienced.

There’s a pleasure in remembering that this vision was committed to public sector housing, so often underfunded, so often marginalised, that makes it easy to forgive some of the missteps and extravagance along the way.  As of 2012, only 18 per cent of the estate’s flats were leasehold so the estate remains social housing in the truest sense.

Martin Pawley, writing with prescience in 1990, compared Alexandra Road to:

an epic silent film. It suffers from having been released into a different world to that in which it was conceived…set on the very cusp of the change from socialism to the me-generation.

(4a) Reyner Banham, quoted in the above.

(7) Residents’ quotes taken from the film One Below The Queen: Rowley Way Speaks for Itself

(9) Quoted in Fabian Watkinson, The Most Expensive Council Housing in the World, Twentieth Century Society (June 2001)

Check out Single Aspect’s blog entry on Alexandra Road too for additional references.

Thanks too to the Camden Local Studies and Archives Centre, the home of much of the material cited above, and its helpful staff.

43 thoughts on “The Alexandra Road Estate, Camden: ‘a magical moment for English housing’”